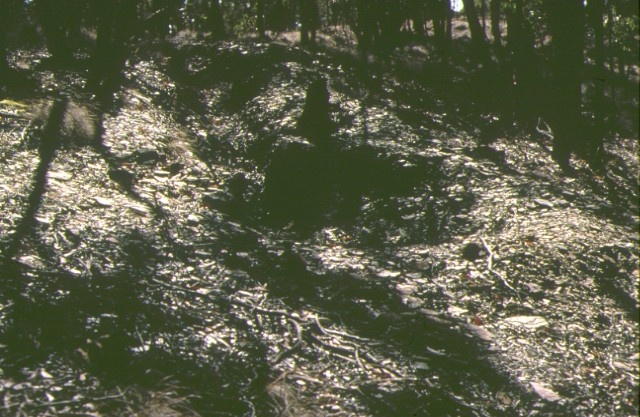 Thomas Smith, a local Sandon farmer, gained distinction as a geologist through the discovery and collection of graptolite fossils from the Sandon-Campbelltown district. Thomas Smith carried out his geological work from c.1898 to his death in 1944, gaining both Australian and international recognition because of the importance of his graptolite fossil discoveries. Thomas Smiths graptolite fossil collection is housed in the Geology Department, Museum of Victoria. The centrepiece of the collection is the extraordinarily well preserved fossils, including specimens of 16 previously unknown species, excavated from a small quarry in LP143735 (known as the 'good bed').

Thomas Smith's 'good bed' fossil quarry is of historical and scientific importance to the State of Victoria.

Thomas Smith's 'good bed' fossil quarry is historically important because of its association with Thomas Smith and his significant contribution to the knowledge of the State's unique geology.

Thomas Smith's 'good bed' fossil quarry is scientifically important in the context of the site's contribution to the advancement of geological understanding in the State and due to the rarity in Victoria of shelly fossils, such as graptolite, which are used worldwide for the dating and correlation of rocks laid down during the Ordovician, Silurian and Early Devonian Periods (390-500 million years ago).