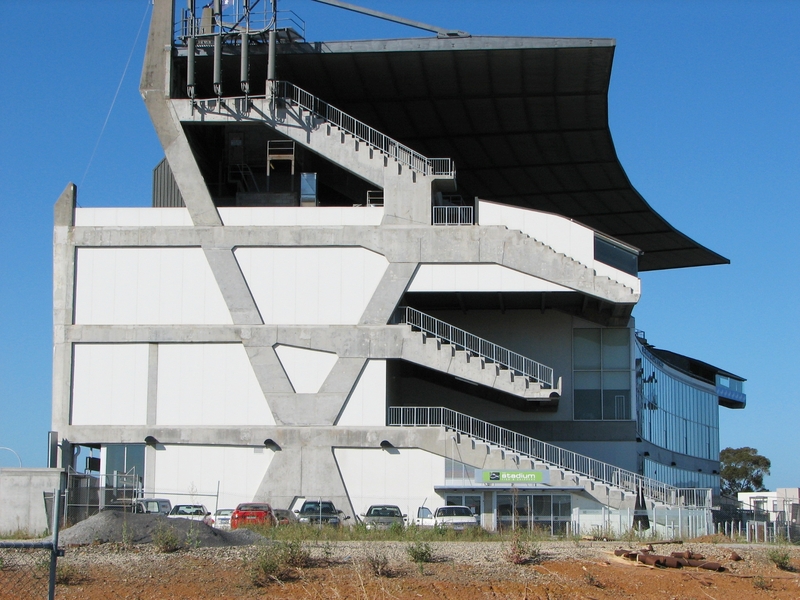 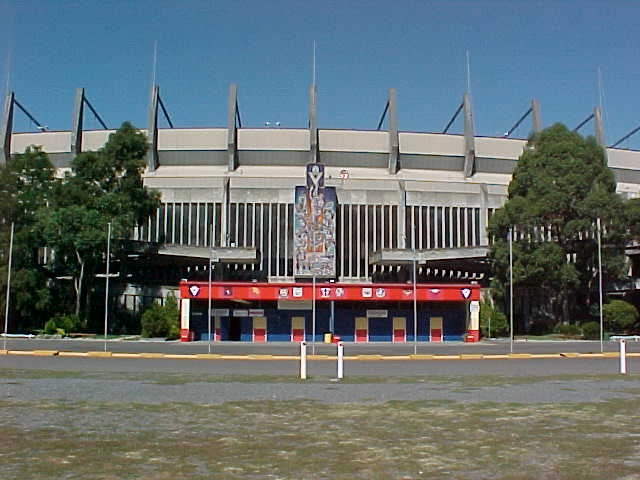 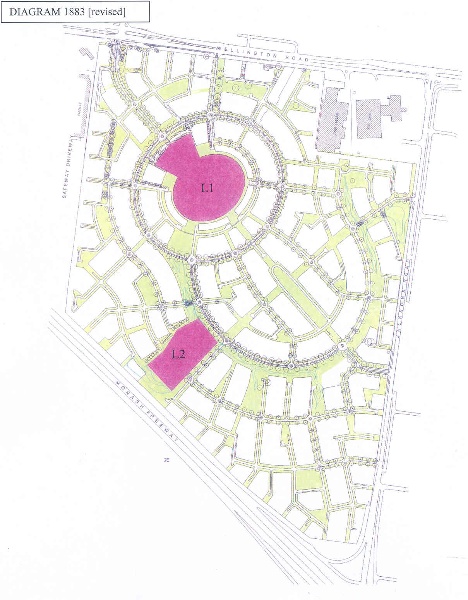 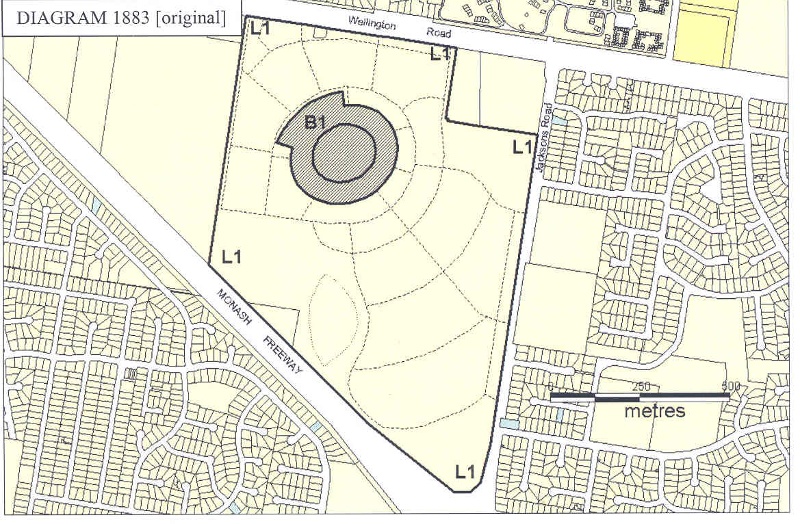 What is significant?
Waverley Park (formerly VFL Park), was opened in 1970 and operated as a key a stadium for Australian Rules Football until 1999. The stadium, with its sunken oval and high cantilevered grandstand (originally intended to completely encircle the ground, was designed by architect Reginald Padey with engineering design by John Connell. The stadium was the manifestation of a long-cherished vision of the president of the Victorian Football League, Sir Kenneth Luke. Up until the building of Waverley, the league had no control over the venues where elite level Australian football was played. The game, which developed in Melbourne in the immediate post-Gold Rush era, quickly became the most popular team sport in several States. Yet the Victorian Football League, the code's most powerful governing body, was still at the mercy of established cricket clubs, particularly the Melbourne Cricket Club, which held the leases of public land for the playing grounds, and inner Melbourne municipal councils where the grounds were situated and were most usually the landlords. A stadium in the fast growing outer eastern suburbs of Melbourne, on land owned and controlled by the league and designed for Australian football rather than cricket, was the plan.

Waverley Park (formerly VFL Park) has had a life of controversy, not least because its threat to the revenues of the politically powerful Melbourne Cricket Club put obstacles in the way of supplanting the Melbourne Cricket Ground (VHR1937) as the pre-eminent football stadium in the State, but also because its location, climate and design made it either loved or hated by football fans. Ironically, a stadium that gave the Victorian Football League the independence it required to pursue the creation of national competition, itself became unwanted by the Australian Football League as that new body concentrated on fewer, more centrally located stadia. The original vision of a stadium of enormous capacity (157,000) was only partly realised with the construction in 1974 of a segment of the encircling stand with its unusual 'scissors' trusses.

The nomination of Waverley Park to the Victorian Heritage Register was also controversial and its inclusion in the Register in 2000 something of a landmark decision for heritage conservation in Australia. The granting of a heritage permit in 2002 for the creation of an entire suburb in the surrounding car park, the retention of the oval, part of the Sir Kenneth Luke stand and a modified lake, led to a recommendation for the reduction of the extent of registration to encompass only those parts of Waverley Park that retain sufficient fabric and form to enable interpretation of the place's significance.

How is it significant?
Waverley Park (formerly VFL Park) is of historical, social and architectural significance to the State of Victoria.

Why is is significant?
Waverley Park (formerly VFL Park) is historically and socially important as a manifestation of the importance of the game of Australian Rules football to Victorians. Australian Rules football has permeated all regions and all sections of society in Victoria, particularly in the twentieth century, and must be viewed as a substantial part of our culture. Waverley Park was the first major venue to be designed specifically for Australian Rules football and was planned expressly to be a showcase for the sport. In a modest-sized city which already accommodated a popular general sports stadium (the MCG) that held more than 100,000 spectators, it was a remarkable ambition of the Victorian Football League to commence what they intended from the outset to be the second-largest stadium in the world (to seat some 157,000) for the benefit of a locally-developed football code which was the dominant winter sport in only four of the Australian states. Waverley Park derives historical interest from its role as host stadium to major VFL and later AFL matches which were regularly scheduled there from 1970; as the site of the 1991 AFL Grand Final when the MCG was unavailable; and as the first venue of night games of World Series one-day cricket which had a divisive effect on the sport, but which was the forerunner of one-day international cricket. Despite being used on occasions for other sports and functions, Waverley Park has remained largely true to its original purpose to be a ground for Australian Rules football.

Waverley Park (formerly VFL Park) is historically and socially important for its pivotal role in the Victorian Football League's wresting of control of its venues from local cricket clubs and municipal ground managers and of the Melbourne Cricket Ground in particular thereby helping to maximise revenue and independence for football. It is of historical and social interest for its associations with the greatest changes that Australian football has undergone. For many Victorians the ground has been perceived as a symbol of change, and even as an agent of change; at the very least it accelerated development from the largely inner-suburban origins of the League football competition to a more commercialised and later, a national competition. It offered the first opportunity for clubs to detach themselves from traditional home grounds for financial advantage. It encouraged the expansion of corporate facilities and revenues from advertising.

Waverley Park also derives historical significance from its place in the post-Second World War suburban expansion of Melbourne towards the east and south-east of the city and belongs to the same era and region as the Chadstone Shopping Centre, Monash University and the new Sandown Park racecourse. Infrastructure lagged behind the building projects, and VFL Park suffered in public estimation because of the deficiencies of road access and public transport.

Waverley Park (formerly VFL Park) is of architectural (and engineering) importance for the design and assembly of its physical structure. The structure and the organisation of the physical elements of Waverley Park give clear evidence of the monumental scope of the undertaking and the attention paid to the long-term planning of the entire scheme. Influenced by the most recent and important overseas stadia existing at that time, and by American sporting facilities, it was unique in Australia, when conceived, for its size, for its innovative and integrated design, and for its amenities. It reflects an advanced approach to stadium design in the early 1960s and the vision of Australian architect Reginald Padey in collaboration with the engineers John Connell and Associates. The use of a sunken oval, excavated to a depth of nine metres (with a fully reticulated drainage system to an on-site storage lake), was a pioneering feature in Australia and allowed for rapid entry to and egress from the ground for patrons, and easy access by way of external ramps to the high stands. Clear sight lines were provided from all locations in the stadium (apparently based on standards adopted for the Tokyo Olympics); however this was at the expense of intimacy. The generous seating allocation and low gradients of the stands and the lavish set-back of the boundary line from the spectator fence(which would have produced a sense of imposing vastness had the full project been completed)conspired to deprive the incomplete ground of theatrical atmosphere except perhaps when the venue was full.

The high stand (the Sir Kenneth Luke Stand), designed in 1963 but not built until 1973-76, is of architectural (and engineering) importance as an early example of a reinforced concrete structure on this scale, and makes a design and architectural feature of this material. It employed the unconventional device of repeated large concrete scissors, or X, frames supporting large-span pre-stressed and post-tensioned concrete cantilevers for seating. This structural solution was recognised by a national merit award from the Association of Consulting Engineers, Australia in 1978, more than a decade after it was designed. The capacity for staged and integrated construction of further sections of the high stand with little inconvenience to the ground's use was impressive and practical.

The stadium was sited in open ground, formerly used for car parking, but the structure has been positioned to take advantage of its elevated location. Even though never completed to its original design, the Kenneth Luke Stand occupies part of the perimeter and closely reflects the original Padey and Connell design. Visible from many vantage points in the district (and itself offering fine views from its higher levels), the stadium as built suggests size, strength and functionality, and this impression is confirmed on approaching Waverley Park itself.

Of note is the large mosaic mural on the central axis of the main stand, which was commissioned by the VFL and completed between 1984-86 by artists Harold Freedman and David Jack. Its significance lies in its symbolism at the time when the VFL was attempting to relocate its Grand Final to Waverley. The mural portrays the heroic, legendary and mythical qualities of Australian Rules football in the heyday of the eleven Melbourne clubs plus Geelong, which for many years constituted the Victorian Football League.