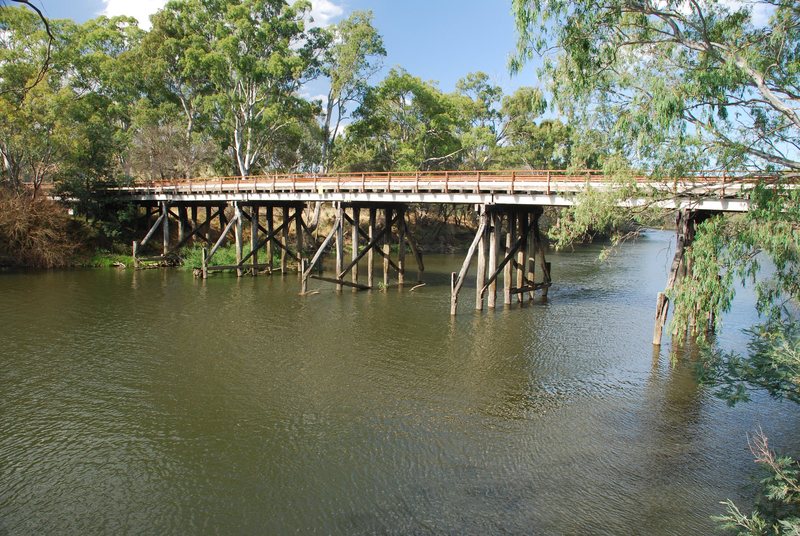 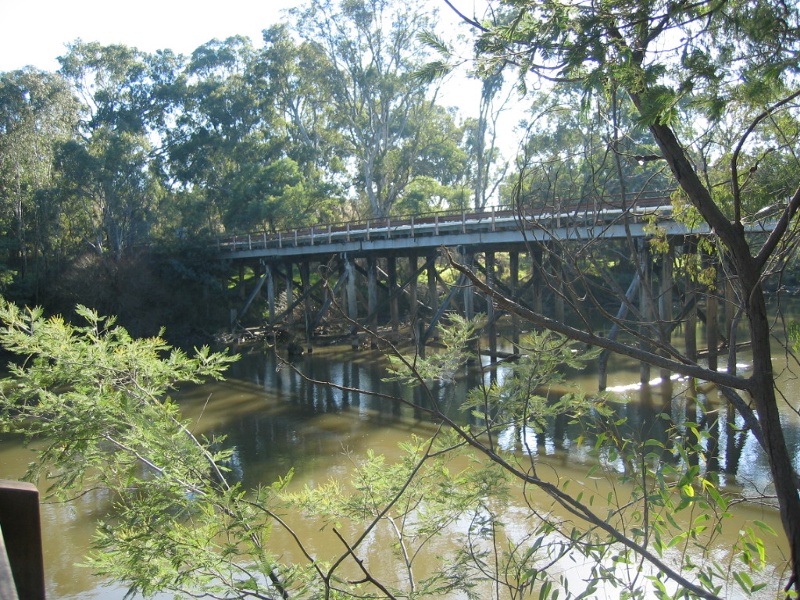 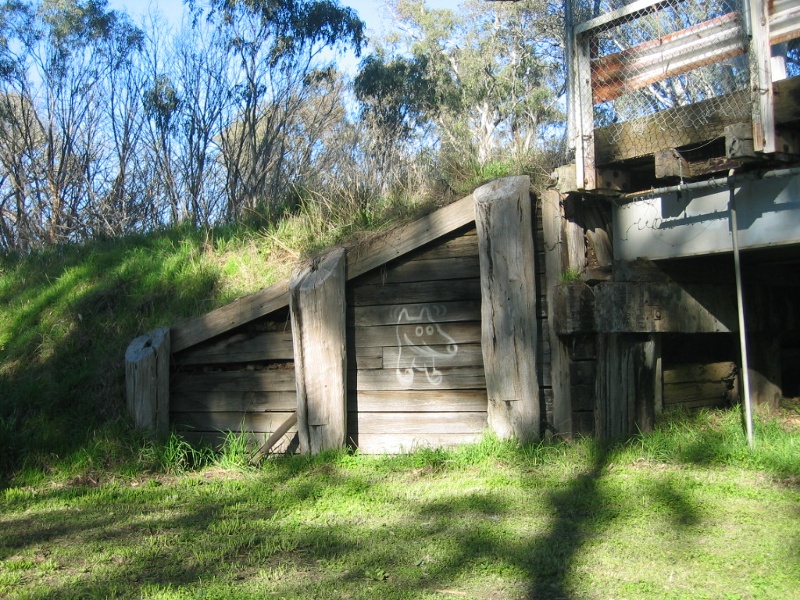 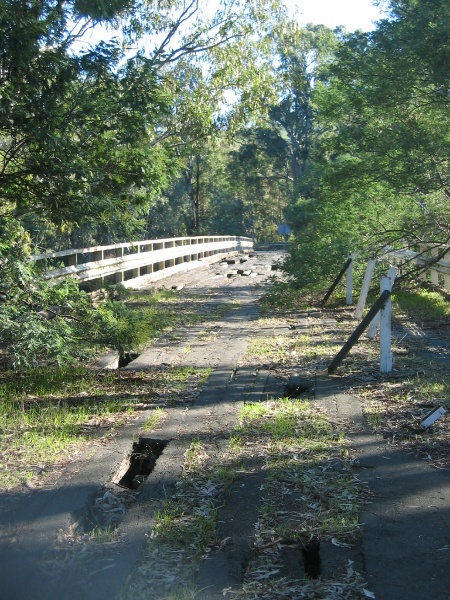 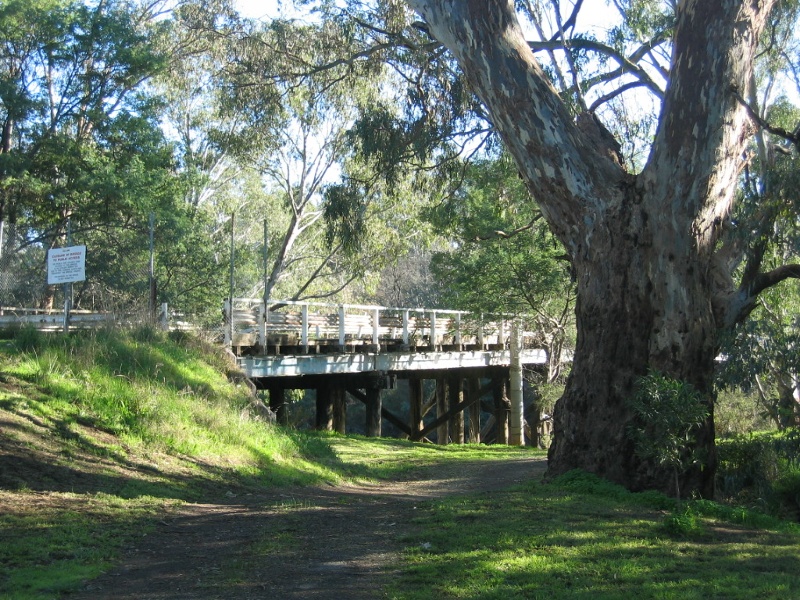 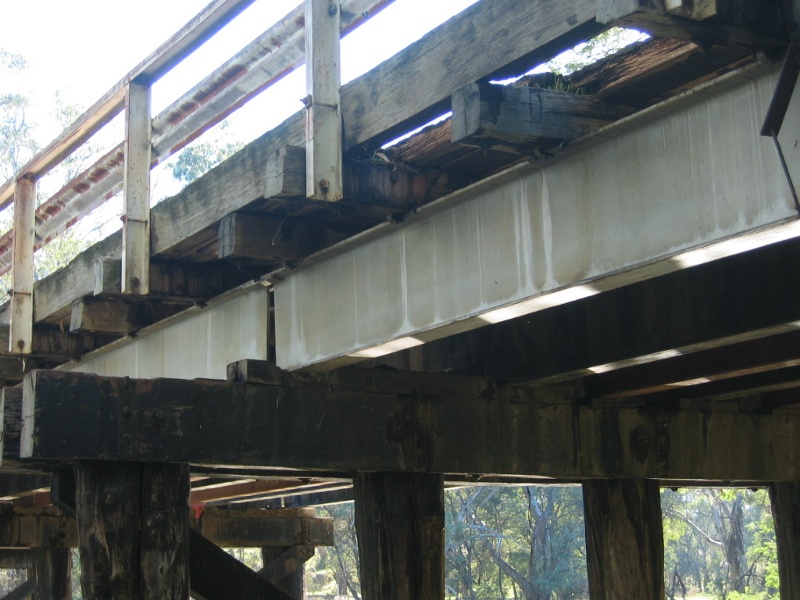 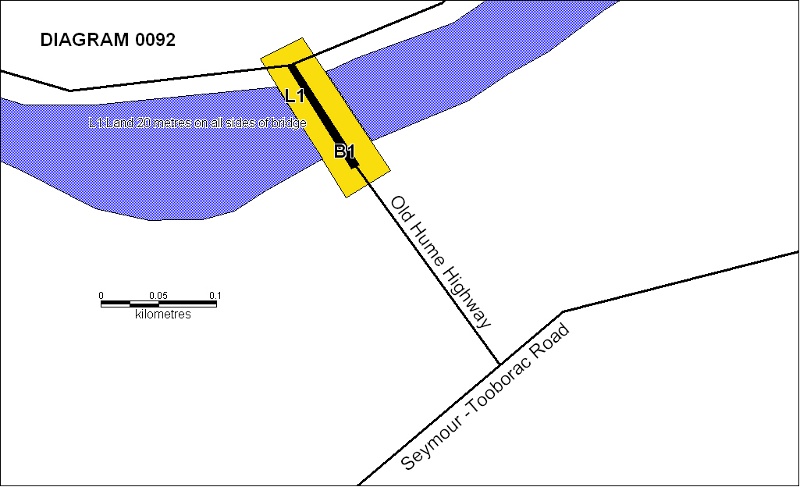 The Old Goulburn River Bridge is a composite timber trestle and metal road bridge on the Old Hume Highway at Seymour. The bridge has 7-pile timber piers and nine spans with a maximum span length of 12 metres. The longitudinally-timbered timber deck is 105 metres in length supported by timber cross beams on 24-inch rolled steel joists.

The bridge spans the crossing place of the Goulburn River on the historic Sydney Road, in use since a Victorian Government punt began operating at the site in 1853. The first timber bridge was constructed in 1862, replaced in 1892 by a new timber bridge constructed by J.B. Farquharson and designed by Shire Engineer, Mr Renou. The bridge was unusual for the use of grey box piers and was the last big-river timber bridge built prior to the economic depression of 1893 after which special State funding for big river bridge projects was withdrawn. When opened in 1892 it was regarded as a superior and extravagantly-expensive structure.

In 1933 the bridge was the first of the main road bridges to be reconstructed under the Country Road Boards' redevelopment of the interstate route, renamed the Hume Highway in 1926. A steel joist and timber superstructure was added to the 1892 grey box substructure.This composite bridge served until the Hume Highway was diverted in 1966. The bridge was closed to vehicular traffic in 1987 and incorporated into a recreation reserve and walking track. Fire has since damaged the deck and the bridge is now closed to all traffic. The remainder of the bridge is in a sound and largely intact, although there is uncertainty about the under water structure.

The Old Goulburn River Bridge, Seymour is of historic, scientific (technological) and aesthetic significance to the State of Victoria.

The Old Goulburn River Bridge is of historic significance for its association with one of Victoria's most important river crossings from 1853 until the diverting of the Hume Highway in 1966.

The Old Goulburn River Bridge is of historical significance in representing two major phases of road bridge construction in Victoria, being the last of the extravagant large timber road bridges of the 19th century and the oldest and most authentic surviving example of a large composite highway bridge of the new motor-vehicle pattern introduced by the Country Roads Board during the Great Depression era.

The Old Goulburn River Bridge has scientific (technical) significance as a rare, well-preserved example of 19th century timber road-bridge construction and is one of four colonial timber bridges constructed on the Goulburn River from 1889-95. The others are Kirwans Bridge (1890, H1886), Chinamans Bridge (1891, H1449) and Mitchellstown Bridge (1895). The design of each varies but all were 'over-built' and collectively they represent a final brief flowering of traditional European pattern-book road bridge construction. However the use of grey box in the substructure of the Old Goulburn River Bridge reflects a significant local innovation in the use of Australian timbers. The strength and durability of the grey box enabled retention of the original substructure in the CRB's reconstruction of the bridge in 1933. The Old Goulburn River Bridge is also significant for its association with J.B. Farquharson who constructed Chinamans Bridge (H1449) and several lift-span and timber truss bridges over the Murray River.

The Old Goulburn River Bridge has scientific (technical) significance as a now rare example of the CRB highway bridges that were built to a far greater strength than other bridges. The use of rolled steel joists and replacement of the traditional transversely planked timber deck with a longitudinally planked deck supported on crossbeams represented the new CRB standard bridge design.

The Old Goulburn River Bridge is of aesthetic significance for its elegant timber structure and native bush setting on the fast-flowing and broad Goulburn River. Several large river Red Gums alongside the approaches to the bridge provide a picturesque context for the bridge.