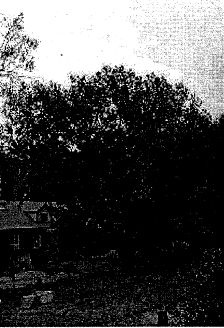 What is significant?
The Poplar tree (Populus sp) planted at the corner of Colquhoun Court and Kent Hughes Road and associated land to a radius of 5m, the root ball or the canopy drip line of the tree, whichever is the greatest.

How is it significant?
The Poplar is historically and aesthetically significant to the Shire of Nillumbik.

Why is it significant?|
The Poplar tree is historically significant for its associations with a number of local families who owned the land near where it grows, including the Denniston, Jones, Hughes and Moore families (Criterion H). And because poplars are now rare within the Shire as native trees have been planted in the Shire since the 1960s (Criterion B). It is of aesthetic significance due to its fine shape and large size, which make it an important element in the streetscape (Criterion E).

ELTHAM STUDY STATEMENT OF SIGNIFICANCE:This tree is a fine and now rare example in Eltham, the near universal move to native planting in the Shire since the 1960s giving it added significance. In addition the size of this tree gives in a not in significant role in the streetscape

This poplar is significant to Nillumbik Shire:

-as a fine and now rare example in Eltllam of a mature exotic planting, from before the near universal move to native planting in the Shire from the 1960s (Criterion 02, B2) ;

- uncommon tree type in the locality and Shire (Criterion-B2

- for the comparatively large size of this tree and its consequent significant role in the streetscape (Criterion E1);

- for its associations with owners, Denniston and Kent Hughes, both prominent in a State context (Criterion H1).