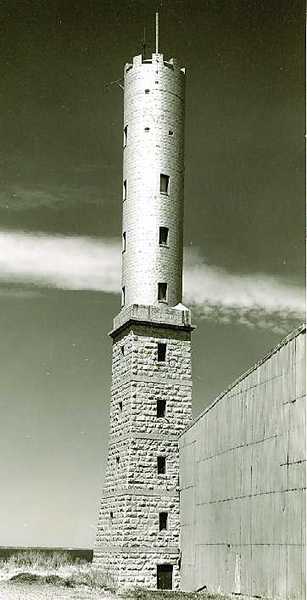 The Lighthouse - Time Ball Tower, is a structure of some 98 feet in height, comprised of a square bluestone section (1852) with a cylindrical brick extension (1930s) on top. The bluestone section has battered lower stories, features rusticated masonry with smooth string courses and had originally a castellated parapet with mast and spherical, copper plate, time ball above. The time ball was dropped daily at 1 p.m.
The Lighthouse - Time Ball Tower is an unique reminder of the period when Williamstown was a thriving port and is a singular example of a Time Ball Tower, a rare structure in Victoria. The Tower is also most distinctive amongst lighthouses in Victoria, being one of, if not the, earliest survivor of lighthouses in the state and is unsual also for its square plan form and originally its Picturesque Castellated Gothic Design. The building's importance remains despite defacement.
Lighthouse (Time Ball Tower), has been extensively altered and added to and has been unsympathetically painted. The Time Ball was discontinued in 1926.
Classified: 'Local' 17/07/1958
Revised: 06/05/1965