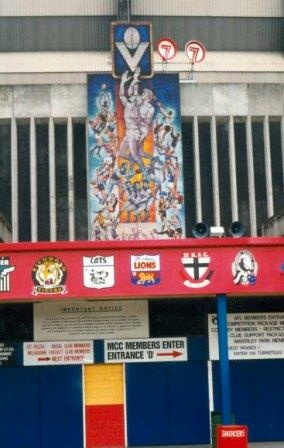 VFL Park (now known as Waverley Park), is of State significance for social, historical and architectural reasons.
SOCIALLY, Waverley Park has established an important meaning to many people's lives, and a strong sense of attachment, especially amongst football followers from the south-eastern suburbs and beyond, despite its perceived failures. This value has been clearly expressed by the outpouring of criticism and despair generated by the closure of the ground.
The polarity of opinions on the ground reflects the dichotomy in the Melbourne community between an attachment to the suburban ideal, and the increasingly popular inner city lifestyle. The passions aroused by the debate over the ground throughout its life is symbolic of the Victorian obsession with sporting spectacle, especially football.
HISTORICALLY, Waverley Park is the first venue, anywhere, to be designed specifically for Australian Rules football. The oval's dimensions and stadium design is specific to the requirements of the code.
The ground demonstrates the vision of Sir Kenneth G. Luke (VFL President 1956-71) to build one of the largest stadiums in the world 'as fine as any on earth', suitable for a future Olympic Games in Melbourne. If the stadium was completed -with a capacity of about 160,000 -it would be the second largest stadium in the world. The totality of this vision also included two secondary ovals, an indoor sporting facility, a motel, ornamental lake, bus terminal and heliport. The planned scale of the ground represents the era of vast attendances at spectator sport before television had made a major impact.
Waverley has been critical in the development of Australian Rules football as a national code, leading to the formation of the Australian Football League (AFL) in 1989, and the corporatisation and commercialisation of the sport in the 1990s. As an independent ground developed by the Victorian Football League (VFL) rather than an individual club, and away from the domination of the Melbourne Cricket Club at the MCG, it reflects the determination of the VFL to control its own destiny, its own grounds, and to maximise its revenue.
The ground was the first venue for World Series one day cricket-a change that revolutionised that game-and was the first venue to introduce regular night competition for football and cricket.
The existence of Waverley Park, planned to be the largest stadium in Australia, in the outer suburbs, reflects the widespread planning strategies of the 1950s and 60s encouraging outer suburban, car-based multi-nodal metropolitan growth. The other major nodes developed, Chadstone Shopping Centre and Monash University are nearby, in an area that eventually became the demographic centre of the city.
The ground is well known for its perceived shortcomings, reflecting the controversies and negative opinions which ultimately prevented the extraordinary stadium design and the wider master-plan being completed. The wide space between the ground and the seating, the unfulfilled promise of a proposed rail link, the resultant traffic congestion and adverse allegations about the local climate, have all been cause for dissatisfaction. The rival Melbourne Cricket Ground, the traditional inner-urban clubs, and later the State Government, were opposed to moving the focus of the game away from it's traditional inner city base.
ARCHITECTURALLY, Waverley Park is one of the most notable examples of a purpose-built sporting venue in Victoria, for its size, innovative stadium design, and player and spectator amenity.
It reflects the most advanced approach to stadium design available in the early 1960s, and the vision of a single architect, Reginald Padey in collaboration with the engineers John Connell and Associates. The use of a sunken oval and consequent mid-level entry provided egress for 157,00 from the stadium in 11 minutes was pioneering, and the sight lines, based on standards adopted for the Tokyo Olympics, allowed a clear view from all spectator positions
The high stand (Kenneth Luke Stand), the result of a direct collaboration between Reg Padey and engineer John Connell, designed in 1963 (but not built until 1973-76) is a pioneering example of reinforced concrete structure, employing the unique device of a concrete scissors frame as support for the large span cantilevers. The clarity and elegance of this structural solution was recognised by the national merit award from the Association of Consulting Engineers, Australia for the engineers, John Connell and Associates, in 1978. The slender underslung roof and the capacity for staged construction were also innovative.
The stand's clear exhibition of structure and circulation, the visually powerful tectonic of the freestanding external ramps, and the use of unadorned reinforced concrete and concrete blocks indicate the influence of Brutalism, a radically new aesthetic at the time of its design (1963) in Australia. The stand also remains one of the few complex engineering structures to exploit the possibilities of the approach.
The full effects of the original design have not been realised, since the high stands, intended to completely encircle the ground, have not been completed. The Kenneth Luke stand nevertheless is virtually intact, and closely reflects the original Padey and Connell design.
Harold Freedman - Football Mosaic
In 1984-86 the giant mosaic mural on the central external axis of the members' stand was completed by notable local muralists Harold Freedman and David Jack, and is considered one of that firm's most important works.
Classified: 03/07/2000

File Note: 18/02/2008 Since 2004, the extent of significant features remaining has been reduced to half of the Kenneth Luke stand, the oval itself and the lake.