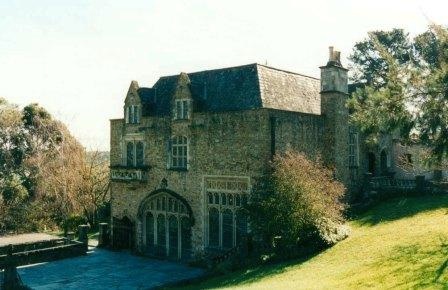 The Montsalvat Artists Colony at Eltham was founded in 1934 by the Melbourne artist, Justus Jorgensen (1894-1975), a charismatic figure who attracted around him a circle of artists and intellectuals. The complex of French Provincial Gothic-style buildings designed by Jorgensen were constructed between 1935 and 1971 and include the Great Hall and Gallery (1938); painting, enamelling, jewellery and leadlight studios, as well as a foundry (1954) and jewellery shop (1957). The earliest buildings on the site, now used as a painting studio, gallery and store, predate the Jorgensen ownership.
The mud brick and recycled building materials linked with the Eltham district were largely popularised by Monsalvat. Through its teachings and community life, Monsalvat has continued to influence the many artists who made their home in the Eltham district. Among the notable people associated with the complex were Mervyn Skipper (novelist and journalist) Clifton Pugh (artist), Alastair Knox, Matcham Skipper (gold and silversmith and sculptor), Myra Skipper (painter, enameller and silversmith), and Len French and Bert Tucker (artists). Twenty artists still have studios at Montsalvat, now managed by Sigmund Jorgensen (designer and entrepreneur and the founder's son). The classification excludes all buildings constructed after 1975.
Classified 21/9/89
Revised:03/08/1998