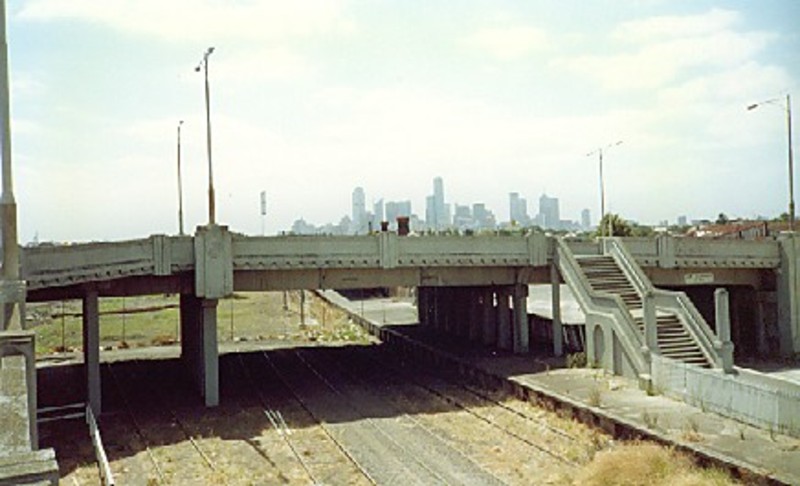 Centenary Bridge is of State, historical, architectural and industrial significance. This cement rendered reinforced concrete beam and slab bridge (built 1934-35) is conspicuous as part of an early multi modal interchange, designed to facilitate access between shipping berths, railways, roadways, pedestrians and notionally, tramways. Together with Station and Princess Piers it expresses the adaption and expansion of Melbourne's ports in response to early twentieth century developments in transport technology. It remains unique in Victoria, despite the growth in the number of bridges with complex lanes and decks after the war. Bold and monumental in design concept, it also pays unusual attention to detail. It features ornamented major piers at its various entrances. Its Moderne ornamentation and sleek lines reflect the era of the glamorous ocean liner and internationalism. Its engineering was designed by prominent Country Roads Board engineers W A Dempster and I J O'Donnell OBE ISO.
The bridge represents a very important link with Victoria's Centenary Celebrations of 1934 -45. It was opened by the Duke of Gloucester as he arrived for the celebrations. It was the pre-eminent centenary monument funded by a public authority and the one major project named especially for the occasion.
The bridge was built as part of the depression Unemployment Relief Program.
It embodied Melbourne's desire for an attractive and dignified international gateway to the city. It was hoped that it would be the initial component of a much grander boulevarde proposal. In function, proportions and architectural style it encapsulates the civic pride and aspirations to internationalism and modernity of Melbourne at the time.
Its proportions and location constitute it as an integral and monumental component of the Station Pier precinct, Melbourne's main international gateway until Tullamarine airport was commissioned. It thus has strong associations with major events in Australia's history, in particular the departure and arrival of troops during the second World War, and the massive immigration of the post war era.
Classified:25/01/1991