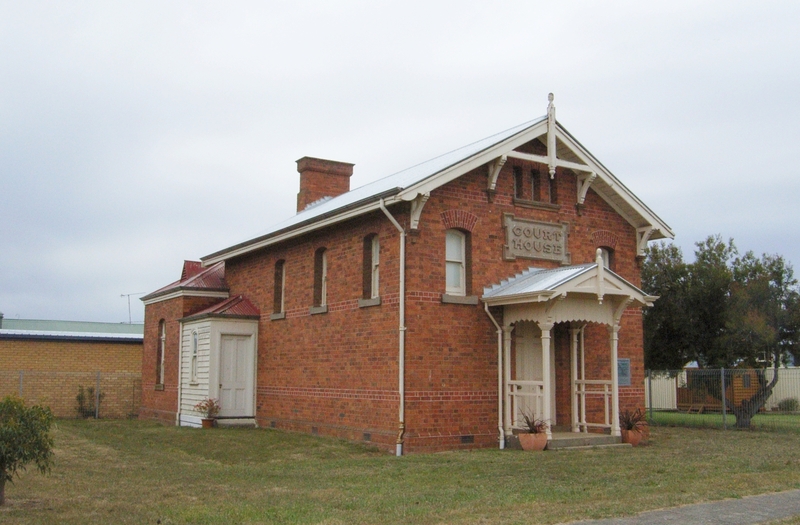 What is significant?
The Former Macarthur Court House was designed by G.B.H. Austin of the Public Works Department in 1891 and constructed by William Wilkinson to house the local Court of Petty Sessions. The three roomed courthouse is built of red brick with tuckpointed string courses, segmented arched lintels and plinths. The roof is corrugated iron and there is a small timber verandah above which is a large carved stone inscribed 'Court House'. Weatherboard porches give access to the Clerk's and Magistrate's rooms. Internally the Court room walls are finished in plaster, lined out to simulate stone and the ceiling is cored and lined with stained and varnished pine boards. In the Magistrates' and Clerk's rooms the walls are lined in plaster and the ceilings in lath and plaster. Both rooms have marble fireplace surrounds and cast iron fenders.

The building ceased being used as a courthouse in 1983.

How is it significant?
The Former Macarthur Court House is of historical and architectural significance to the State of Victoria.

Why is it significant?
The Former Macarthur Court House is historically significant for demonstrating the spread of law and order across the state, which is indicative of the progress of Victoria's development. The building is important for its association with G B H Austin, a Public Works Department architect responsible for the design of a range of important public buildings in Victoria during the late nineteenth century, including the Melbourne Magistrates Court, 1888 building (University of Melbourne) and Mount Buffalo Chalet.