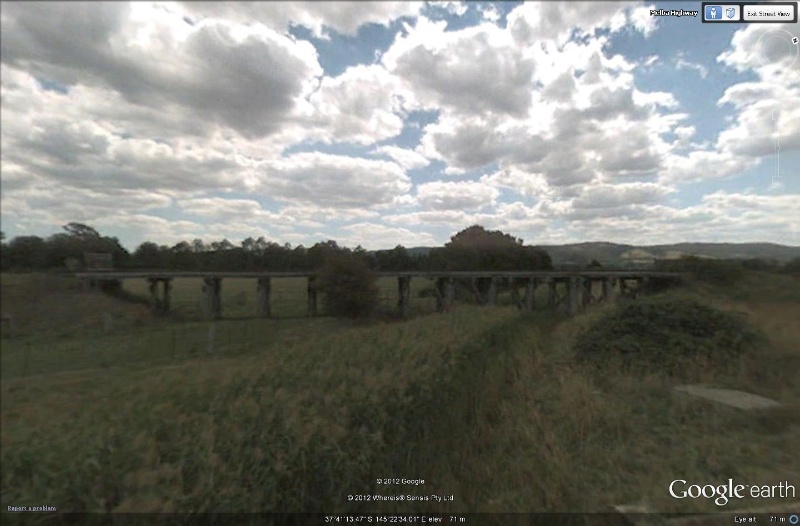 The Stringybark Creek single track timber-and-steel rail bridge was built in 1887 as a longitudinal-timber-deck bridge with thirteen spans each of eleven feet, for the first stage of the Lilydale-Healesville Railway that linked Lilydale with Yarra Flats (later Yarra Glen). It is scientifically and historically significant at State level, being a very rare surviving intact example and the largest and most publically accessible example, of a rail bridge featuring a transitional phase between fully-longitudinal timber decking and a full rail-deck design. Each span has twelve pieces of longitudinal rail, six pieces under the main load-bearing section on each side of the deck, with four longitudinal-timber beams constituting the central section of the deck. This was an interim form commonly used in the 1920's, but most other Victorian railway bridges of its type have long since been fully converted to rail-deck design or replaced by culverts.
When this bridge was constructed in 1887, Victoria possessed numerous timber railway bridges with spans either of seven feet or eleven feet feauturing longitudinal-timber decking, in contrast to alternative designs using fifteen or twenty feet timber beams topped by transverse-timber decks (the latter designs are represented by nearby remnant bridges from the old Yarra Glen Viaduct). There were many much longer railway bridges of the standard eleven-feet-span and longitudinal-timber-deck design, but medium-length bridges like those near Yarra Glen were more typical of bridges of that design.
Stringybark Creek Bridge gains in significance from being one in a widely-varied series of small to medium eleven-feet-span railway bridges surviving in good condition on the historic Lilydale-Healesville Railway, and especially from its close proximity to the contrasting remnant timber-beam and transverse-timber-decked bridges of the Yarra Glen Railway Viaduct.
This bridge is pleasantly situated amidst open and fertile pastoral land in the Upper Yarra Valley with timbered hills as a backdrop. It is close to and easily visible and accessible from the Melba Highway near Yarra Glen. Stringybark Creek is the largest and most accessible to car travellers from Melbourne of this extremely rare type of railway bridge.
Classified: 07/08/2000