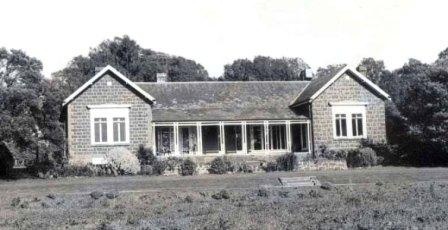 Glenaroua Station was established as a sheeprun in 1838 by William Hamilton.It remained in the Hamilton family until the 1880s when it was acquired by Michaelis Hallenstein and Co. The original homestead consisted of a simple mud brick dwelling. The present bluestone structure was erected in stages in the 1850s and 1860s. The principal facade is composed of a timber verandah flanked by projecting gable wings. The roof is clad in slates.
Glenaroua is one of the oldest pastoral stations in Victoria and it is said that the lease to William Hamilton was the first granted in the Port Philip District. The home is superbly situated in a landscape of mature exotic trees and overlooks an open paddock and watercourse. It is solidly constructed and has a form typical of the conservative domestic style of the mid-nineteenth century. The building has grown and changed throughout the years. However, it still retains the essence of its original appearance. The interior has been almost completely gutted and is of little significance. The exterior is reasonably intact; the window opening behind the front verandah have been enlarged.
Classified: 25/03/1965