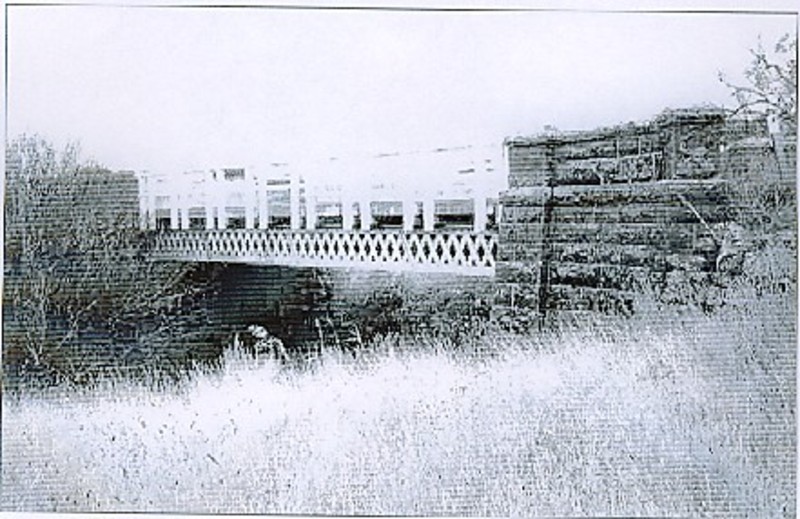 What is significant? McLennan Bridge is a riveted, wrought iron, lattice truss and stone bridge east of Clunes Township built in the 1870s, probably by the Borough of Clunes. The bridge has a single span of 15 metres over a deep section of Bullarook or Birch Creek. It is one of a small number of wrought iron lattice girder bridges with bluestone buttresses built following the gold rushes, which are concentrated in the central gold fields.
How is it significant? McLennan Bridge is significant for aesthetic/architectural, historic, and scientific (technical) reasons at a State level.
Why is it significant? McLennan Bridge is of historical significance as one of a small number of riveted wrought-iron lattice truss bridges built as a direct result of devastating Colony-wide floods in 1870, which destroyed many of the early gold era timber road bridges. The bridge is also of historical significance for its association with the gold rushes and subsequent mineral boom in the Central Goldfields and the consequent development of local engineering firms on the gold fields in the second half of the nineteenth century. All three of the similar pattern lattice truss bridges of this period are within the same district and may reflect either a common engineer/designer, and/or common construction authority.
McLennan Bridge is the third oldest of this type of colonial designed, wrought-iron lattice-girder deck-truss bridge, after the Glenmona bridge at Bung Bong and the nearby Jorgenson's Bridge. It post-dates three other iron bridges of different form, where much deeper trusses are used in deck or through truss designs, namely Old Plenty Road, Hawthorn and Mia Mia Bridges. It is one of only 24 metal road bridges dating to the 1870s or earlier, with many of this group relating to road over rail bridges for the Melbourne Bendigo and Geelong Ballarat Lines.
It is of technical significance for the rare and distinctive lattice truss design, which reflects British engineering practice of the mid-nineteenth century and its adaptation to colonial conditions. The wrought-iron design displaced a more conventional timber bridge on the site. The use of the truss design reflects the engineering solutions at the time to provide high and wide spans to clear the rare but devastating floods. Several other wrought-iron lattice-truss designs were used elsewhere to replace earlier laminated-timber arch bridges in wide-channel situations. The design of McLennan bridge almost certainly drew on the slightly earlier Glenmona Bridge, which was the prototype for a general road-bridge pattern that would evolve as it became widely used in central Victoria and the Western District during the colonial era.
The three narrow-depth lattice-truss bridges of the 1870s, Glenmona, Jorgenson's and McLennan, were all built with benefit of hindsight of the freak floodwaters across Victoria in 1870. In scientific and technological terms, this bridge demonstrates one of the earliest examples of locally-produced wrought-iron lattice-girder produced for road-bridge use, which were probably, like the Glenmona bridge, manufactured at a Ballarat iron works rather than imported from Britain. McLennan Bridge is also of scientific significance as an important relic that demonstrates aspects of Victorian iron-working technology in the second half of the 19th century and for the elucidation of the functional or historical factors which led to different designs in this period. For example, other locally produced wrought-iron bridges of the period employed more mundane iron plate girders such as the Hotspur Bridge of 1870, or the rugged but less aesthetically pleasing above-deck wrought-iron box girders of the 1868 Keilor Bridge and Shelford Bridge.
It is of aesthetic or architectural significance as a finely balanced picturesque and attractive bridge in an unspoilt rural setting, little changed from the period in which it was constructed. The finely worked basalt masonry with tapering batters, string-courses, parapets and curved wingwalls, balances the relatively light appearance of the girders. The bridge demonstrates both the design aesthetic of Colonial engineers, and the manual skill of stonemasons, metal fabricators and bridge carpenters.
Classified 29/11/2004