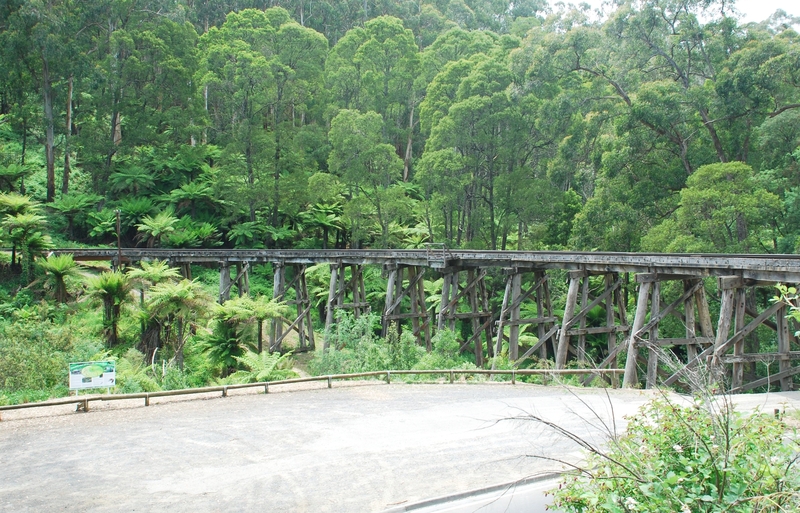 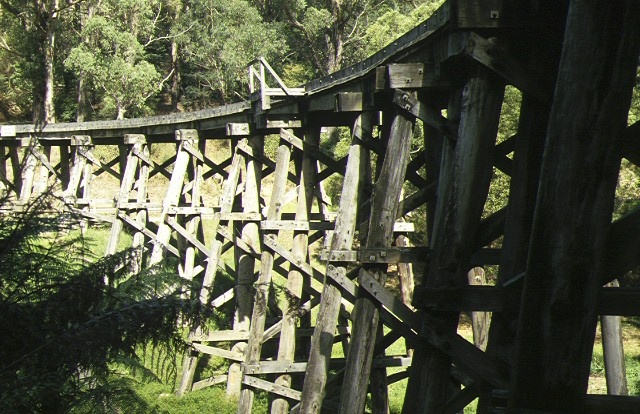 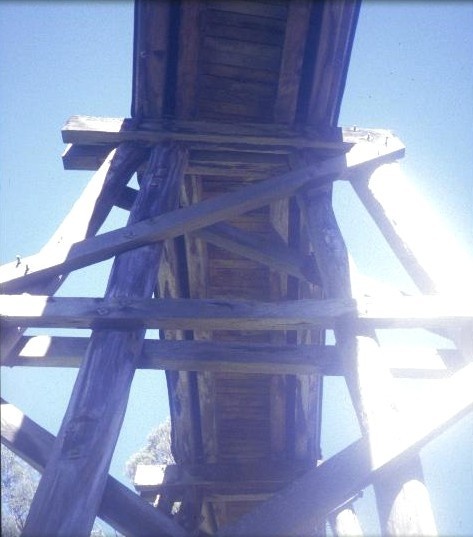 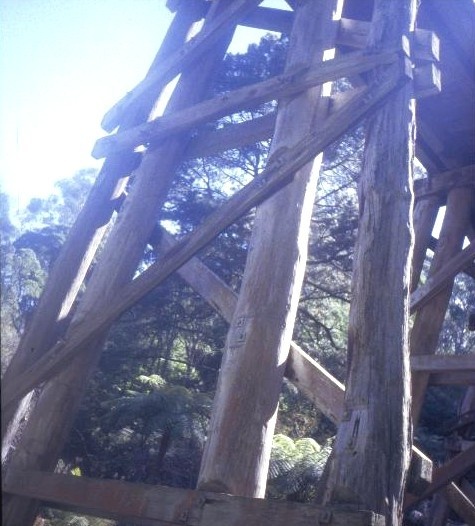 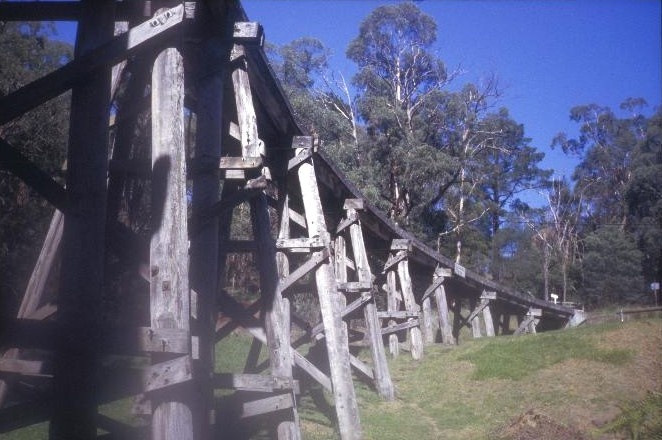 In 1899 construction of the Ferntree Gully-Gembrook Line began which included the Rail Bridge, over Monbulk Creek, Selby. Victoria Railways architects designed the line and The Board of Lands and Works Construction Branch employed one hundred and eighty men for a period of sixteen months, many of them local timber workers, as labour. One of the features of the construction of the railway, and in particular the Trestle Bridge, was the use of construction methods which utilised native bush timbers. These were not in ready supply at this time as the area had been devastated by bushfire in 1898. The narrow gauge line supplied local people with goods and services on a regular basis and provided reliable access to markets for local industries as well as revitalising the tourist industry in the picturesque hills. In 1954 the narrow gauge line was closed and in 1958 management of the line was handed over to The Puffing Billy Preservation Society. The Puffing Billy steam train services began on the line in 1965 as a tourist concern. In 1977 the ownership of the line was handed over to the Tourist Railway Board. The Rail Bridge, over Monbulk Creek, Selby is a curved, timber trestle bridge carrying a single narrow gauge track which spans the Monbulk Creek and the Belgrave Emerald Rd. A viewing bay has been constructed for tourists, off Belgrave-Emerald Rd. The bridge is 85 metres long, 12 metres high at its highest point and comprises 14 spans of 6 metres, curved to a radius of 20 metres. The bridge has a tight 3 chain curvature. It was constructed from local, native bush timbers. The bridge has undergone progressive replacement of damaged timbers. Major structural repair and conservation works were carried out in 1983 and 1988.

The Rail Bridge, over Monbulk Creek, Selby is of historical, social and architectural importance to the State of Victoria.

The Rail Bridge, over Monbulk Creek is of historical importance for its association with the construction of narrow gauge railway lines in Victoria. During the 1890s depression, broad gauge railway line construction was not considered economically viable and the Parliamentary Standing Committee on Railways in 1896 considered alternative railway construction techniques. Following the committee's recommendations, four narrow gauge rail lines were built in Victoria between 1899 and 1916. The Rail Bridge is an important component of the former narrow gauge Ferntree Gully-Gembrook Line. The bridge is also of historical importance for its association with the economic stimulus the narrow gauge railway generated in the Dandenongs. Businesses that benefited included the Nobelius Nurseries, which became the largest nursery in the Southern Hemisphere in the pre World War One period. The timber, tourism and soft fruit industries also benefited from the lines' construction.

The Rail Bridge, over Monbulk Creek is historically and socially important for its association with the recreational tourism industry in Victoria. The journey into the hills, including the ride over this famous bridge, became a popular weekend recreational activity enjoyed by local and overseas visitors from the lines' initial construction in 1899, and after its reopening as the Puffing Billy Line in 1965. The bridge is socially important for its associations with the community movement to protect and restore the narrow gauge line from the 1950s. This movement is an example of community concern over heritage issues which developed within parts of the Victorian community in the post war period.

The Rail Bridge, over Monbulk Creek is architecturally important because it is an essentially intact example of a timber trestle bridge and is possibly the most extremely curved surviving bridge in Victoria. It is also significant as an example of trestle bridge construction, using construction methods which utilised local native timbers.