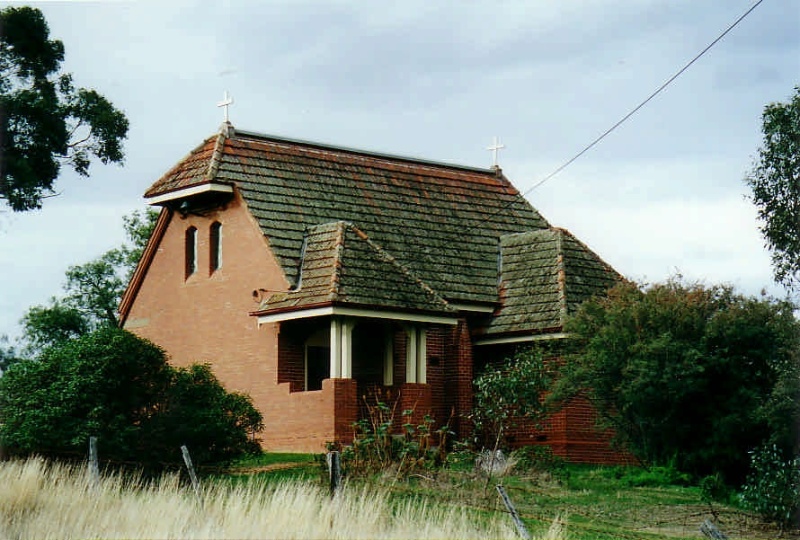 The All Saints Anglican Church, 1707 Dunolly Road, Emu, makes a significant contribution to the rural setting in which it is situated. An unusual Arts and Crafts Gothic styled building, this largely intact Church was constructed in 1934 to the design by Louis Williams, prominent Melbourne architect of numerous Anglican, Methodist and Catholic churches.

All Saints Anglican Church is architecturally and scientifically significant at a LOCAL level. It demonstrates original design qualities of an Arts and Crafts Gothic style. These qualities include the gable roof form which traverses the site, and particularly by the cantilevered hipped roof bellcote at the gable end. Other intact qualities include the two minor hipped roof forms which project at the side (with one forming an open timbered porch supported by simple double timber columns and reached by a series of steps); tiled roof cladding, unpainted brick wall construction with specially moulded bricks that were a design trait of the architect. All of the roof forms are clad in tiles, with specially moulded bricks being a feature of the work of the architect, Louis Williams; two pointed lancet windows under the bellcote; two metal crosses on the roofline; pointed arched door opening adorned with voussoirs; and the bevel-edged unpainted brick plinths.

All Saints Anglican Church is socially significant at a LOCAL level. It is recognised and valued by the Emu community for religious reasons.

Overall, All Saints Anglican Church is of LOCAL significance.