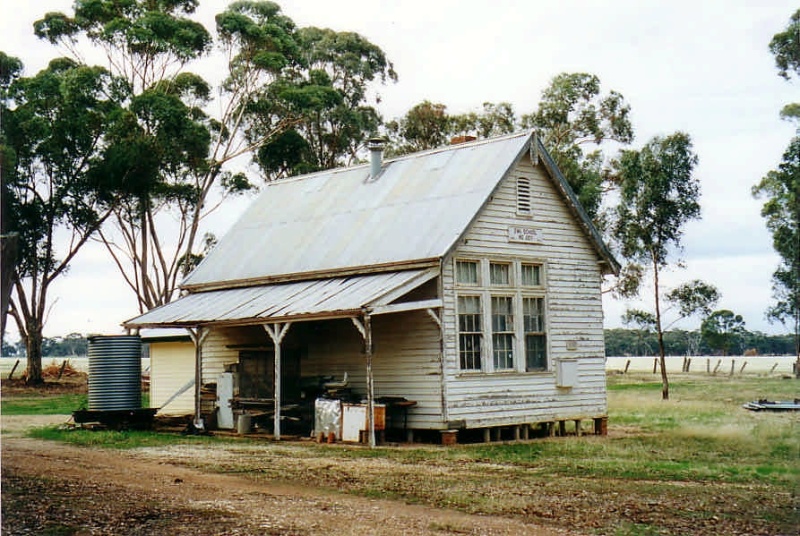 The former Emu State School, 1803 Dunolly Road, Emu, has significance as a legacy of an educational centre in the local community (that was originally known as Kooroc), and as a moderately intact example of a Department of Education 40-type Victorian style. Built by 1884 as Kooroc State School No. 2011, it was in 1908 when the named changed to Emu State School No. 2011. The building appears to have been relocated and altered, and is in fair condition.

The former Emu State School is architecturally significant at LOCAL level. Although the building has experienced some changes and has been relocated, it still demonstrates original design qualities of a Department of Education 40-type Victorian style. These qualities include the simple steeply pitched gable roof form, lapped galvanised corrugated iron and the horizontal timber weatherboard wall cladding. Other intact or appropriate qualities include the modest eaves, bank of three timber framed, 12 paned double hung windows with 3 paned hopper sashes above, timber bargeboards, remnant timber finial base, and the timber ventilator in the gable end.

The former Emu State School is historically significant at a LOCAL level. It is associated with the development of State School No. 2011 at Emu from 1884 until 1970. Originally known as the Kooroc State School, the name was changed in 1908 to the Emu State School No. 2011. The building also has associations with the Department of Education and its head architect, Henry Bastow, whereby standardised designs for schools were established, including a 40-type building that appears to have been the basis of the design for the former Emu school.

Overall, the former Emu School is of LOCAL significance.