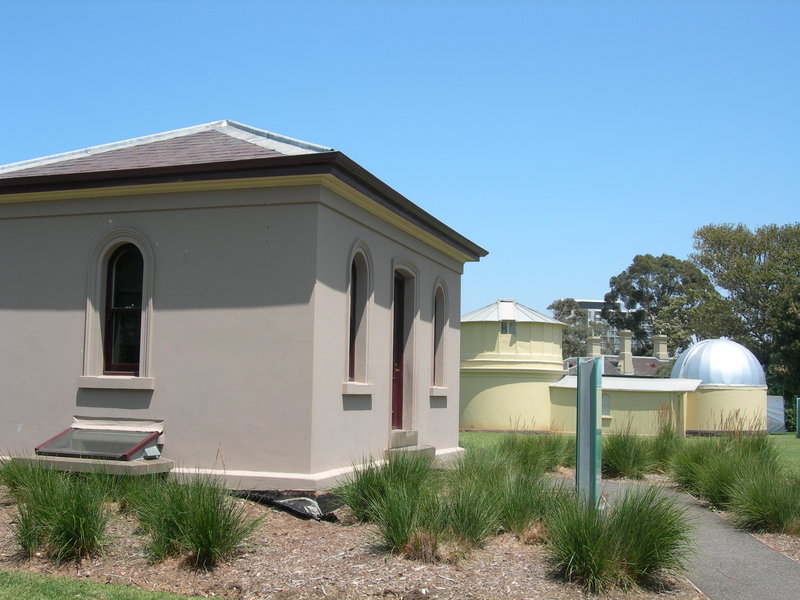 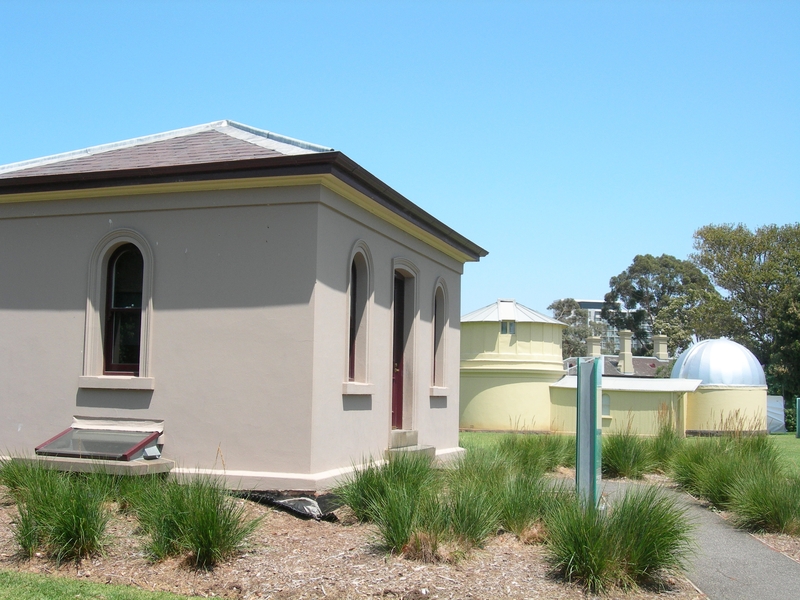 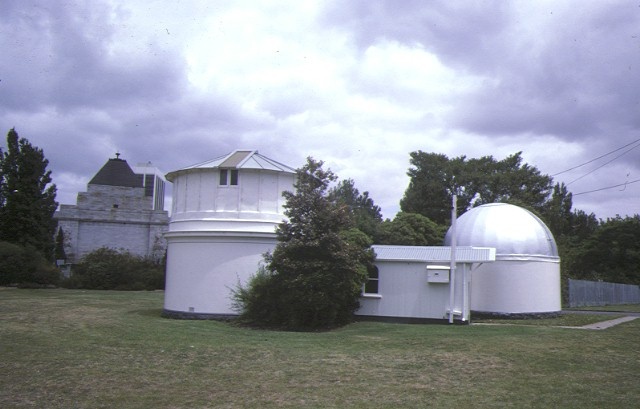 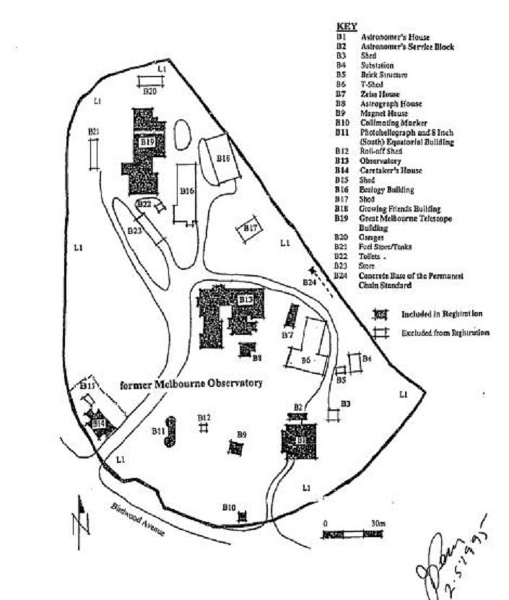 The Observatory Site is a complex consisting of the following buildings:

Astronomical, magnetic and meteorological observations were conducted at the site from 1861 until 1945. The buildings were designed by Public Works Department architects, largely in an Italianate style that complements the nearby Government House.

The Observatory Site is of scientific, historical and architectural significance to the State of Victoria.

The Observatory Site is of scientific significance as a record of the development of 19th century astronomical, magnetic and meteorological technology, and has international as well as Victorian significance. The complex was one of the few well-equipped observatories functioning in the Southern Hemisphere in the 19th and early 20th centuries, providing the world with basic scientific information unavailable from other sources. It was instrumental in providing Victoria with accurate time, as well as meteorological statistics. The observatory was vital in the exploration of Antarctica at the beginning of this century. Within the overall scientific importance of the site, individual buildings have specific scientific significance.

The Great Melbourne Telescope building, dating from 1869 and erected to house one the world's major nineteenth century astronomical instruments, demonstrates considerable engineering skill and ingenuity in the construction of the roll-off roof, even if this design feature, dictated by the scientific establishment in Britain, contributed to the eventual failure of the telescope within it. The additions to this building illustrate the developing research work of the establishment, while the surviving design detailing, finishes and fittings show the working of the building, and the conditions and environment of a 19th and early 20th century Government observatory.

The Photoheliograph Dome building of 1873 and the Eight Inch South Equatorial building of 1874, are significant because they were erected specifically for the observation of the transit of Venus in 1874, a rare astronomical event which could best be observed from the Southern Hemisphere, and which yielded results unavailable to the scientific world from any other source. Photographs of the transit taken by W. Kernot from the photoheliograph building, and subsequent photographs of the sun made between 1874 and 1885 were taken to England, where they were analysed and incorporated into major research programmes and publications being undertaken at the time.

The 1877 Magnet House, the last structure of the former magnetic observatory still surviving on the observatory site, was the location for magnetic observations carried out in Melbourne from 1858 until 1918. These observations formed the base to which all the magnetic surveys of Australia, and all magnetic work of the Antarctic expeditions, were referred and standardised. The building's design is of considerable elegance and simplicity, its construction specifically omitting all ferrous material to avoid magnetic interference.

The Astrograph House of 1889 was specially erected for the international Paris Observatory-based project of preparing a photographic atlas of stars. It is an idiosyncratic design by important Public Works Department architect A J Macdonald, showing his flamboyant, art nouveau design characteristics. It remains a functioning observatory building, incorporating early fittings, fixtures and design features, and continues to be used by the Astronomical Society of Victoria.

A number of structures in the grounds are also of individual significance in illustrating the work of the observatory. These include the meridian collimating mark, and its visual alignment with the third transit room, and the remnants of the permanent chain standard.

The Observatory Site is of historical significance because it reflects the scientific aspirations of the young colony. The large complex is a remarkable testimony to public investment in scientific endeavour over a long period. The observatory is also significant for its associations with many important figures in Victorian history who were directly involved in the development and management of the observatory, and the scientific direction of the work undertaken by the institution. They include Professor William Wilson, George Verdon, George von Neumayer, Henry Barkly, Charles Pasley, Joseph Kay, William Kernot, Professor Thomas Lyle, Alfred Deakin, Theodore Fink, John Davis, as well as the astronomers Robert Ellery, Piertro Baracchi, and Joseph Baldwin.

The Zeiss House of 1936, named for the famous German brand of telescope, is significant for its associations with noted engineer, soldier and amateur astronomer Sir John Monash whose former telescope it contains. The building was erected, and is owned and operated by the Astronomical Society of Victoria.

The Observatory Site is of architectural significance as an example of the work of the Public Works Department over an extended period and as testimony to the public investment in scientific infrastructure during the 19th century. The main observatory building dating from 1861 and designed by Gustav Joachimi of the Public Works Department, working in conjunction with Professor Wilson and Neumayer, is an elegantly detailed Italianate structure, of asymmetrical design, its picturesque massing aided by the presence of a dome and tower, reinforcing the somewhat romantic appearance. Subsequent additions to the structure, dictated by functional need, reinforced the original design concept. The early building design detailing and interior finishes and fittings surviving (often in fragment form) in this building are of significance, showing the working of the building and the conditions and environment of a nineteenth and early twentieth century Government observatory. Later buildings also reflect the Public Works Department's efforts to provide quality architecture on the site. The Second Astronomer's residence and its out building of 1889, for instance, are an important, influential and substantially intact example of the early development of the English Queen Anne style in Victoria.

At a recent visit to Melbourne Observatory (MO) I was shocked to see much inappropriate development; including a cafe, the demolition of the historic Zeus House and standard chain base despite Heritage Victoria listing, and much more. This has taken place since the Royal Botanical Gardens took over 15 - 20 yrs ago. Now the RBG have asked for public comment on their next 20yr plan which makes little or no reference to Melbourne Observatory; so it seems RBG have no real interest in preserving MO.

The RBG are planning to develop the Melbourne Observatory site, with no consideration for the other sciences that the site was used for - astronomical research, meteorological statistics, time keeping. The Zeiss House which was significant for its associations with Sir John Monash was demolished by the RBG. How much more will they demolish for their botanical gardens, remembering they have a site out at Cranbourne as well.

The Great Melbourne Telescope is being refurbished and I hope it will be returned to Melbourne Observatory, so the public can view this magnificent telescope with all the history that surrounds it. Sydney Observatory is a perfect example of a way to save and preserve our astronomical history, equipment and buildings. I hope the RBG realise that the site is not all about botanical items!