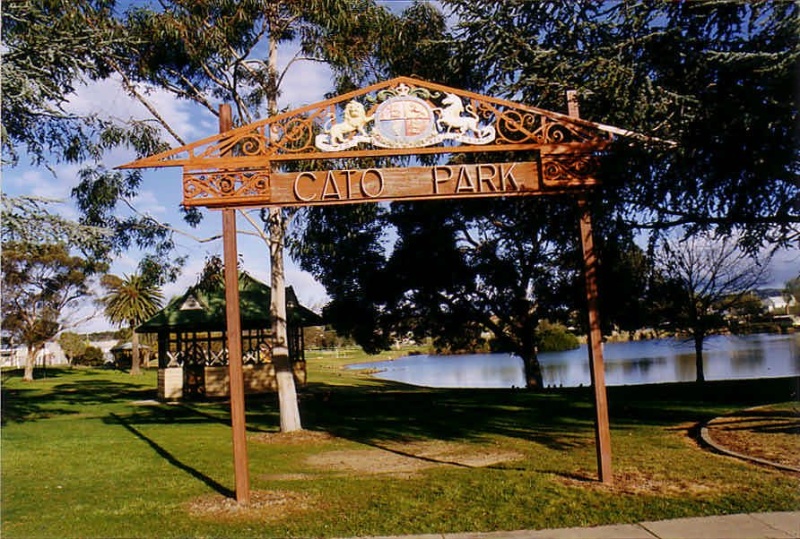 Cato Park was formed in the early twentieth century by the efforts of the Stawell Progress Association from the former tailings dam of the Victoria Crushing Company and on land once occupied by the St George Mine. The work was assisted by the donations of Mr. E. Simmons and Mr. Frederick Cato. The lake was once home to Stawell Olympic swimming pool and retains plantings and the 1916 kiosk building. The gate dates from 1957 and includes items donated by Whelan the Wrecker including the coat of arms.

Cato Park, 9-11 Victoria Street, Stawell is historically significant at a LOCAL level. It is associated with mining in Stawell including the St. George Mine and the Victorian Crushing Battery. The lake was formed from the battery's tailing dam. Cato park is also associated with the Stawell progress Association who proposed, partly funded and carried out the beautification of the site including the formation of the lake, the forming of the grassed surrounds, the kiosk building and the gate. Cato park is also a memorial to a number of Stawell benefactors including Mr. E. Simmons, Frederick J Cato and Mr. P. Whelan. The park was also the site of the Stawell swimming pool from 1958 to 1988.

Cato Park, 9-11 Victoria Street, Stawell is socially significant at a LOCAL level. The park is recognised by members of the Stawell community for its continuing recreational values.