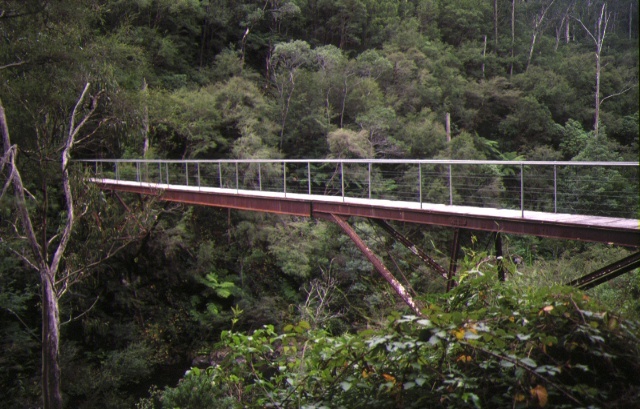 The Tramway Bridge over Thomson River, Poverty Point, Walhalla, was constructed in 1900 by Dorman Long (London, England), and erected by Austral Otis Co (South Melbourne). Used on a seven-mile, horse-worked two-foot gauge railway/tramway, it was built for the Long Tunnel goldmining company mine. It is a prefabricated steel structure, imported from England and consisting of steel girders and tubular steel vertical and diagonal struts. The line was closed between Platina and Walhalla in 1944 and the timber deck was later destroyed by fire. A new timber deck and steel handrail were completed in 1976 by the Forestry Commission, and it currently serves as a pedestrian bridge.

The Tramway Bridge at Walhalla is historically and architecturally significant to the State of Victoria.

The Tramway Bridge at Walhalla is historically significant as an important reminder of the gold mining industry of Gippsland, and for its role in serving the Long Tunnel gold mining company mine at Walhalla. It was used to bring mining timbers and firewood for the mine's boilers and furnaces, and is therefore also significant for its role in the development of the mining town of Walhalla.

The Tramway Bridge is architecturally significant as a unique and essentially intact example of a bridge of its type constructed in Victoria. It is unusual in being constructed of imported prefabricated steel at this time since bridges of this size were typically constructed of timber trestles. (Beeston, 1995)