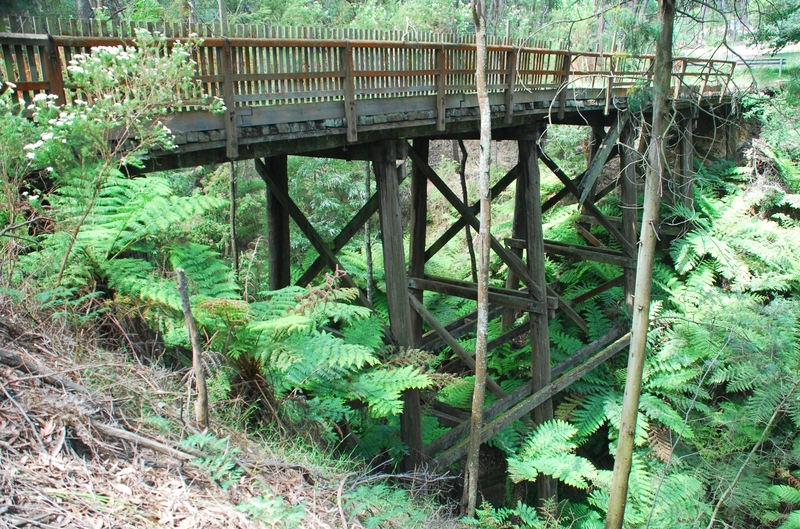 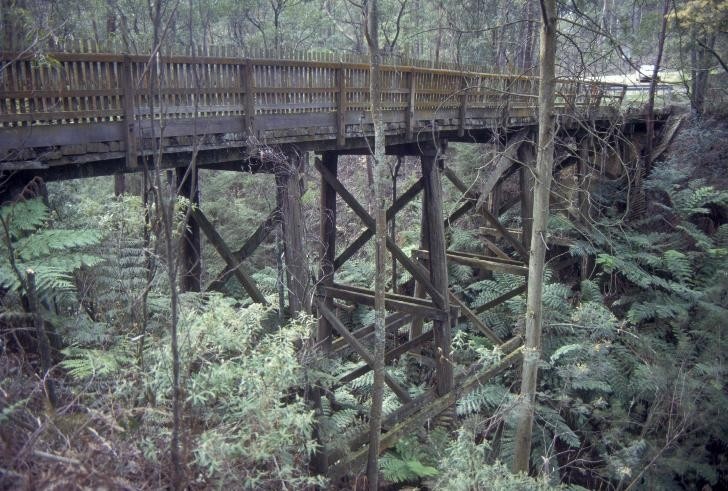 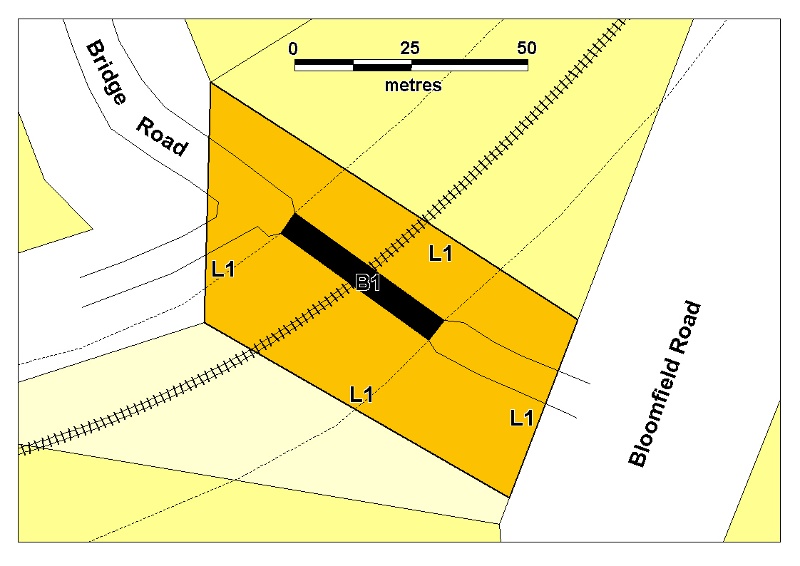 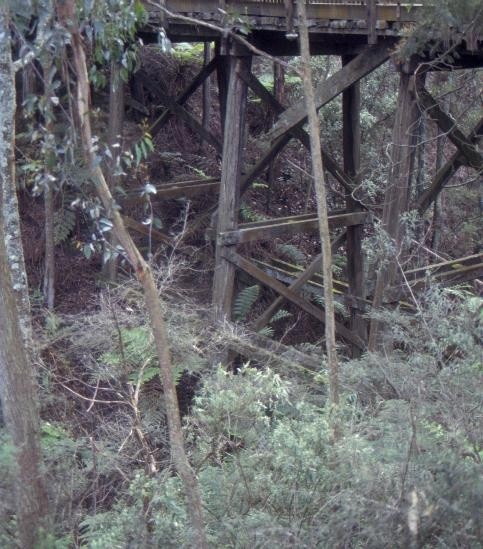 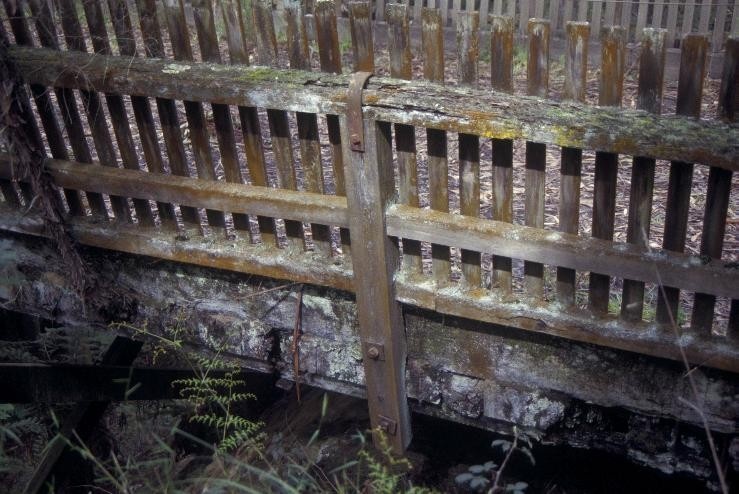 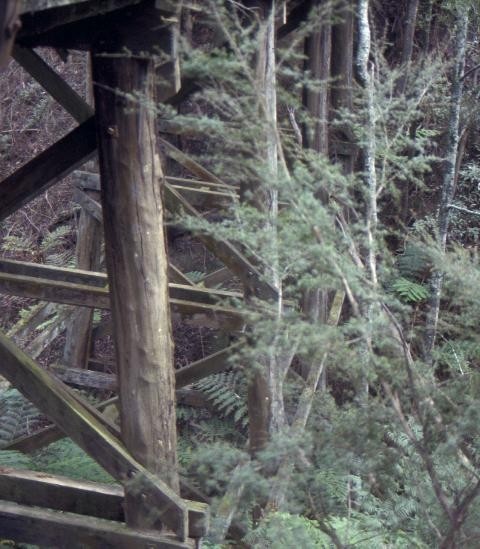 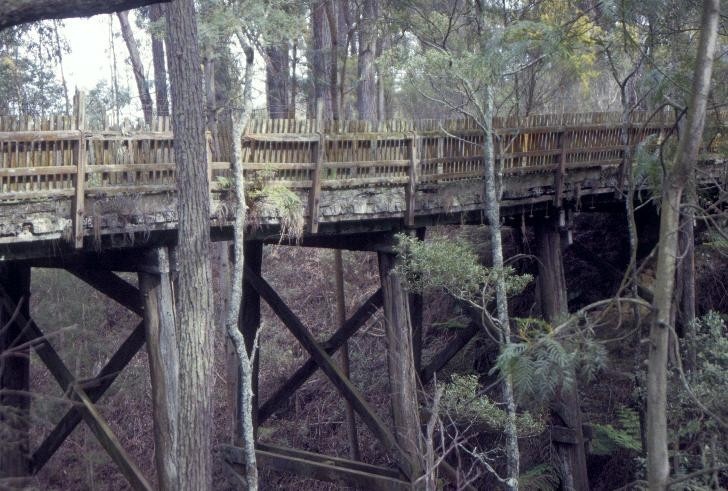 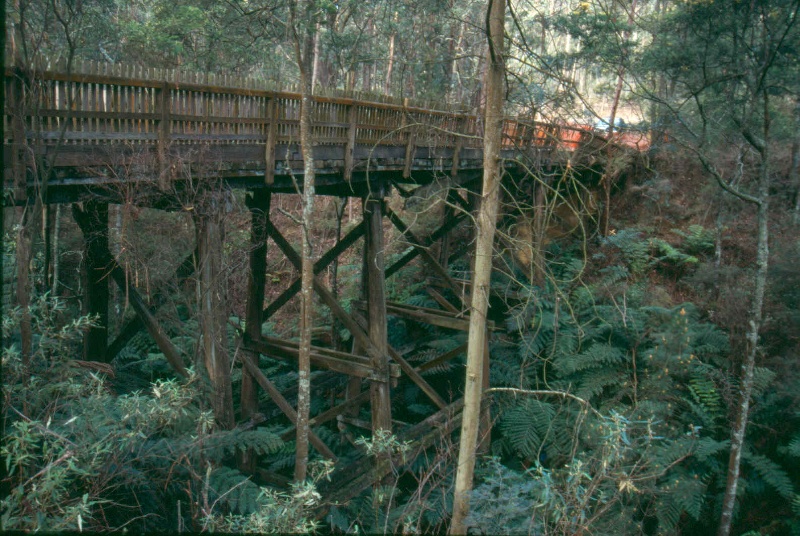 The Timber Bridge, Crossover was constructed by the Victorian Railways in 1892 as part of the Warragul to Neerim South (later Noojee) line. This railway line was opened as far as Neerim South in the 1890s and was used to transport timber and farm produce. The bridge was designed by Edward Ballard, Chief Engineer of Works for the Victorian Railways. Early roads in the area often followed the ridgelines, whereas the later railway followed creek lines to maintain easier grades. From the summit of Crossover Bloomfield Road follows the ridgeline to the Main Neerim Road. The railway line followed Red Jacket Creek from the south west and intersected the old Bloomfield Road where it crossed the ridge via a deep cutting into the catchment of Red Hill Creek on the north east. The line was closed in 1958 as road transport became more prevalent, and the track has since been removed. Bloomfield Road was later altered with a two lane crossing over the partially filled railway cutting just off the ridge to the north ? the old line of road was then renamed Bridge Road. Vehicular use of the bridge continued for access to properties on Bridge Road until the bridge was recently closed after major failure of a stringer and part of the kerb and railing.

The hill is made of soft material and consequently the cutting is broad with easy angled sides. The Timber Bridge spans around 40 metres with six trestles, the central of which are 15?20m tall. The trestles have two unsquared piles and squared doubled crossheads, doubled walings, and cross braces. There is also paired longitudinal bracing between piles of successive trestles at about one third height . There are five squared 400x180mm stringers to a span. The 175x150mm cross decking is laid diagonally, tarred and overlaid with gravel. A 300x150mm kerb is topped by a timber post and three-rail guardrail, with pickets to the inside similar to those applied to timber foot bridges at stations. The design and detail of the main supporting structure is very similar to that of timber rail bridges built by the Victorian Railways Department, except for the even spacing of the girders across the crossheads.

The Timber Bridgeat Crossover is of scientific and historical significance to the State of Victoria.

The Timber Bridge at Crossover is scientific (technical) significance as an example of a timber trestle road bridge built using the construction methods typicall used on timber rail bridges by the Victorian Railways Department. It differs in detail from the many timber trestle road bridges built in the region by local government, including the use of squared timbers for stringers and the picket style railings.

The Timber Bridge, Crossover is of historical significance as one of the few remaining parts of the infrastructure of the now defunct Warragul to Neerim South line, which was instrumental in the development of the region. The bridge and cutting are of historic significance because they are demonstrative of the successive development of transport routes in the region, with early tracks and roads following the ridges and the later railways taking easier gradients along the creeks andusing cuttings over saddles.