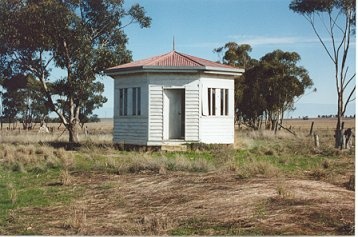 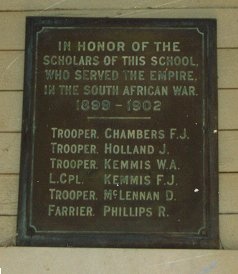 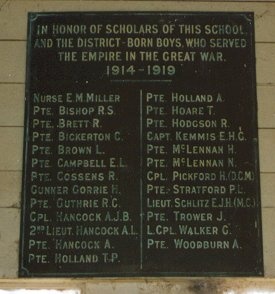 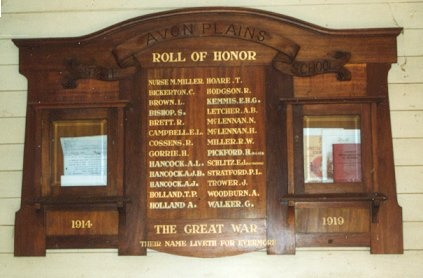 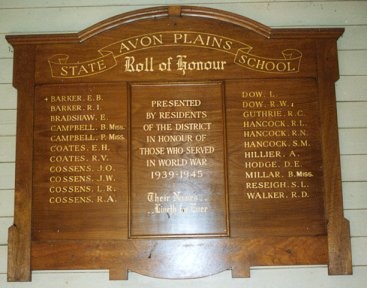 Avon Plains War Memorial Pavilion, Donald-Avon Plains Road, Avon Plains is a single storey, octagonal weatherboard shelter with a pyramidal roof form clad in galvanised corrugated iron. The interior is lined with pine with a pine floor, still in reasonably good condition. The bank of window frames are of an early date, as are the doorway and the timber door but some of the window glazing is missing. Square galvanised iron gutters have been introduced in recent years. There is some evidence of either dry rot or termite damage to the frame. About a third of the roofing iron is missing.

Avon Plains War Memorial Pavilion, Donald-Avon Plains Road, Avon Plains is located within the grounds of the former Avon Plains State School. The school is no longer on the site. The Shelter was constructed in 1918, funded by public subscription and an Education Department donation, to commemorate servicemen who served in World War I. Inside the pavilion were placed two solid brass Honour Rolls. One read "In Honor of the Scholars of this School who served the Empire in the South African War, 1899-1902". The other read: "In Honor of Scholars of this School and the District-Born Boys who served the Empire in the Great War, 1914-1919". Subsequently two polished timber Honour Rolls commemorating scholars who served in World Wars I and II were installed, together with eight large photographic portraits of some of the former students in military uniform. All the Honour Rolls and photographs were removed in 1993 and transferred to the Donald RSL and the St Arnaud RSL Halls.