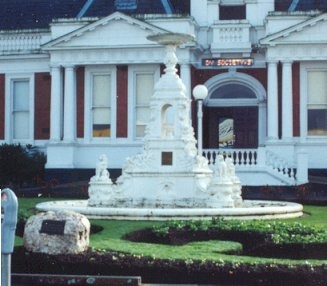 The Ararat Boer War Memorial is located in front of the John Fox Gardens and the Town Hall, Town Hall Square, Western Highway. Established in 1905, the fountain was initially planned to mark Queen Victoria's diamond jubilee, but Cr Hargreaves suggested that it should also commemorate those of Ararat's volunteers 'who sleep in the war-scarred veldts of South Africa'. Ararat had sent twenty-one volunteers and those who survived received gold medals from fellow citizens. Empire patriotism was strong. When the mayor interrupted the formal opening ceremony for the new Town Ball in 1899 to read out a telegram giving news of a British victory in the Transvaal, the audience cheered and spontaneously broke into 'Rule Brittania'. The fountain was apparently obtained ready made. Hargreaves informed his fellow councillors that he had obtained the design from a Melbourne firm and tabled a photograph showing the kind of fountain which could be obtained for between 100 and 125 pounds. The modellers were Wardrop and Scurry of North Melbourne.