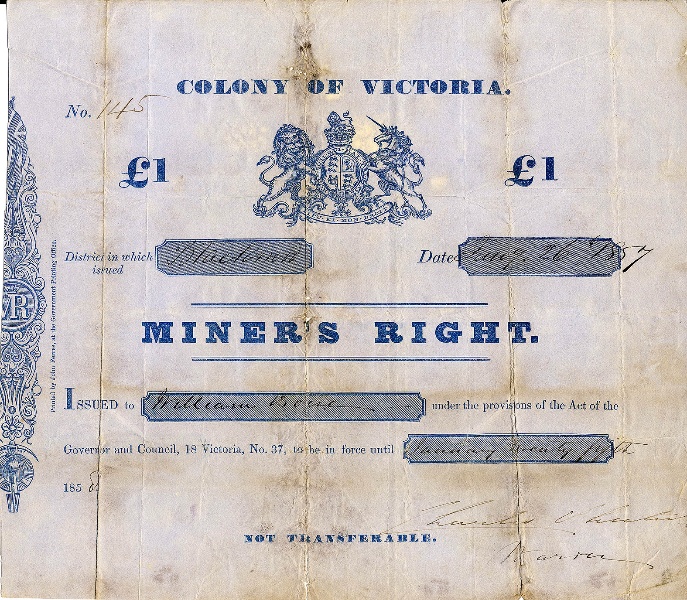 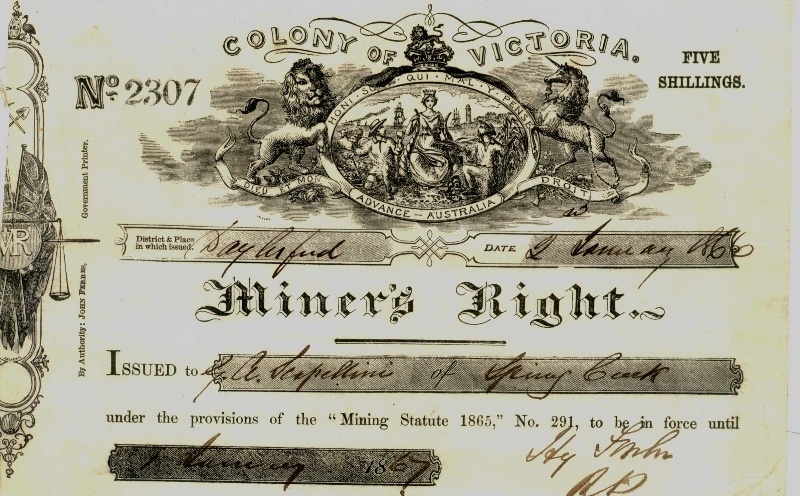 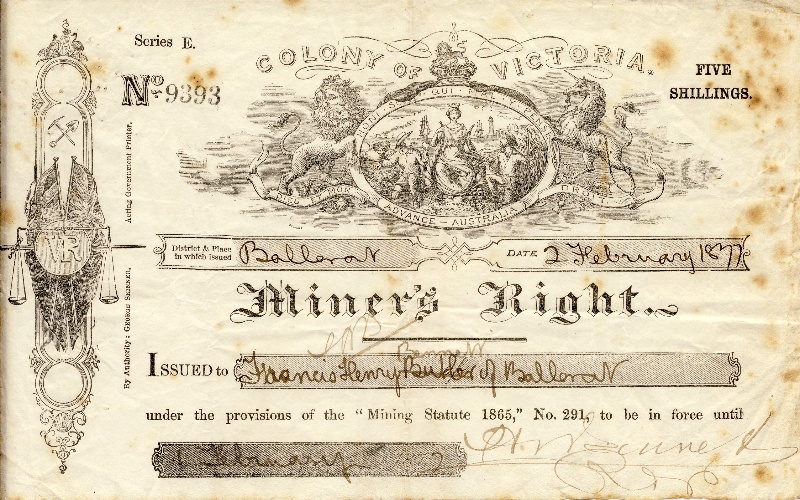 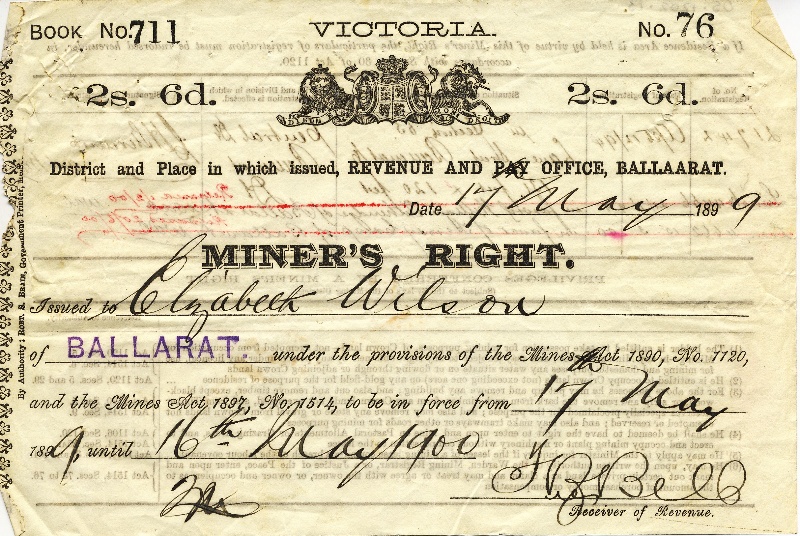 The Miner's Rights Collection is held by the Gold Museum, Ballarat. It consists of 298 miner's right certificates issued in Victoria between 1857 and 1971. Of these 183 are from the Ballarat area and the remainder come from various locations in the state.

The Victorian gold rushes began in earnest in mid-1851, and a licence system was introduced shortly after. The licence fee was seen as a direct tax and considered prohibitive by the miners. With increasingly harsh enforcement of the licence system over the next three years, unrest among the miners increased. The protest movement became more organised, with a deputation from Bendigo carrying a petition to the Governor in August 1853 and the Ballarat Reform League Charter presented in November 1854. The Eureka uprising occurred on 3 December 1854. The report of the resulting Royal Commission in March 1855 recommended the change from Gold License to Miner's Right. On 12 June 1855 the third Goldfields Act was passed, in which the Miner's Right became the necessary evidence for the occupation of a claim. Holding of the Miner's Right also elected members of the new Local Court which decided mining disputes. The franchise was effectively given to holders of the Miner's Right, when the new constitution took effect in November 1856, by virtue of the provision for the holder to occupy crown land and reside. This was effective until November 1857, when universal manhood suffrage was introduced.

The first Miner's Right was issued in late June 1855, and in July the first Local Courts were elected by miner's right holders. By the end of July 1855 30,000 Miner's Rights had been issued, and 50,000 had been issued by the end of the year. The fourth Goldfields Act, passed in early 1858, gave increased privileges to holders of Miner's Rights. These included the right to make residential claims, allowing the cutting of timber on claims and giving the right to build races and dams on any crown lands for mining purposes. The Local Courts were replaced by a combination of a Court of Mines and elected Mining Boards. Under the Mining Statute of 1865 the Miner's Right could be issued for up to 15 years. One quarter of an acre of crown land could be occupied for residential purposes. Timber of Crown land could be cut for fuel and timber, stone and other material on Crown land could be used for building and mining purposes. The residential claim was vitally important in the development of Victoria's gold-mining towns where a remarkably high proportion of residents were owner occupiers.

In the 1930s Depression, Miner's Rights were given out to the unemployed, along with supplies and a prospector's guide. In the 1960s most miner's residential areas were converted to freehold. The classes of lands upon which prospecting under a Miner's Right were permitted were gradually restricted and in 1975 holders of the Miner's Right were required to obtain consent before they could obtain the legal right to mine a deposit.

The Miner's Rights Collection is of historical significance for its capacity to symbolise the positive outcomes for gold miners brought about by Eureka and the preceding democratic movements of the miners. The Miner's Right symbolises the gains of the diggers in terms of enfranchisement and self regulation on the goldfields.

The Miner's Rights Collection is of historical significance for its capacity to represent the successful new system of gold field's administration introduced to the Victorian gold fields. This new system proved economical and sustainable, operating substantially unchanged up until 1975. The Miner's Rights are also of significance because the system was subsequently adopted on a number of other goldfields, including New Zealand.

The Miner's Rights Collection is of historical significance for the inclusion of a Miners Right from 1856 which represents the two year period from 1855 until universal male suffrage in 1857, during which the Miners Right gave the holder the vote in the Legislative Assembly.

The Miner's Rights Collection is of historical significance as a collection representing the use of the right to a residential claim conferred by the Miner's Right which was widely exercised well into the twentieth century. The right to make a residential claim was vitally important in the development of towns in the gold-mining areas of Victoria. The collection demonstrates the continuation of use of this right within families over generations.

The Miner's Rights Collection is of historical significance as a representative collection of Miner's Rights from the first years of its issue up until new legislation in the 1970s.

The Miner's Rights Collection is of social significance as a collection of Miner's Rights which symbolise the attachment of miners over several generations to the freedoms and privileges which the Miners Right permitted. The Miner's Right and associated activities have been an integral part of life in gold fields areas for 150 years.