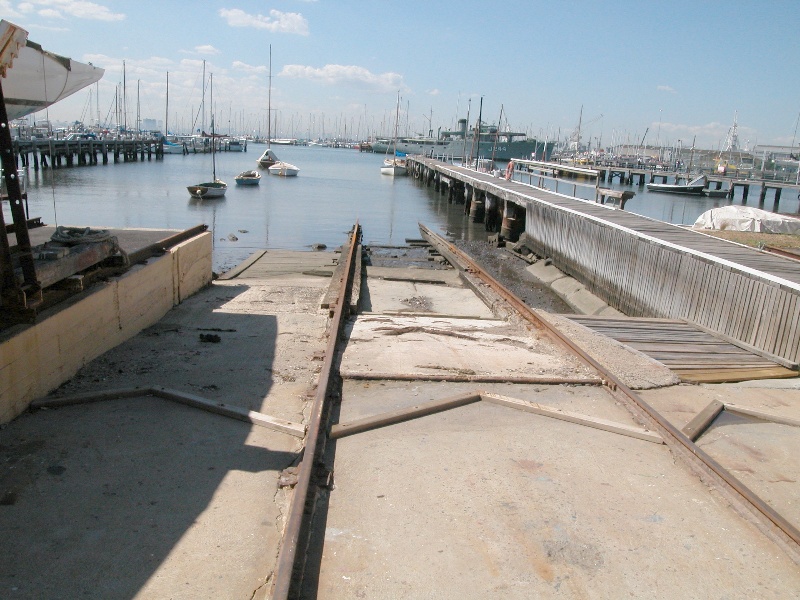 Blunt's boatyard and slipway contains a simple rectangular shed with corrugated iron roof and weatherboard walls. The gables of this shed, as with the two sheds adjacent, feature simple timber tracery infill to upper half in Edwardian style. The main address is to the water with 'Blunts' appearing in large letters. The roof is supported on simple timber trusses with a central iron/steel tie. The trusses towards the sea side half of the shed have been modified to allow big boats inside, by cutting the bottom chord and installing a makeshift hammer beam system with an additional timber collar tie-cum-scissor truss reinforcement. The floor is of timber. The office in the front corner is lined inside and out with beaded softwood lining boards. A later extension of this enclosure is in similar materials A set of slip-rails extends inside

The timber shed, and two adjacent sheds of similar design on the Commonwealth owned naval cadet site adjacent to the west, date from around 1913. The slipway system occupies most of the yard. The original slipway was reputedly constructed using elements from the first floating dock to be used in Port Phillip, though there is no above water evidence of this. The slip leads to a three rail traverser system which is operated by a hand winch and which allows access to six storage/work bays. Another set of rails leads into the shed. The trusses of the seaward end of the shed have been modified to allow sheltered work on larger vessels. There are a number of cradles of various ages and materials in the yard. The main slipway winch is of a type likely to have come from a ship. An older main winch is still located nearby. The long timber pier has a number of moorings and is of a height suited to small vessels.

Blunts Boatyard and Slipway is of historical and archaeological significance to the State of Victoria.

Blunts Boatyard and Slipway is of historical significance as a rare operating example of the many small scale boat-building and repairing businesses which operated on the Williamstown foreshore from the 1840s . The use, equipment and layout of the yard remain similar to that of earlier in the twentieth century, while many of the other yards have disappeared or have been changed more substantially. The Blunt family boat building business has operated continuously in Williamstown since 1888, and in Victoria since the 1850s. The business occupied a portion of the foreshore on or near the current site when they first moved to Williamstown, signifying a long link between this site and boat-building business.

Blunts Boatyard and Slipway is of archaeological significance for its potential to yield information about nineteenth century structures and works which occupied the site at 150 Nelson Place and information related to early boat building and repair structures in Hobsons Bay.