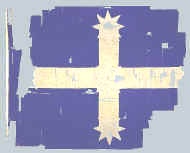 The Eureka Flag, made in 1854, is a rectangular piece of woollen cloth measuring 260 cm by 400 cm with appliqued cotton motifs. It features an off-white cross with an eight-pointed star cross at each extremity on a dark blue ground. The design is based on the constellation of the Southern Cross and it is sometimes referred to as the 'Southern Cross' flag. Just over 69% of the original flag survives and is held in the Ballarat Fine Art Gallery. It is displayed with a number of fragments torn off during the flag's long history and now returned to the collection of the Gallery.

The flag is an important historical relic, symbolising Australia's only armed rebellion against the government which took place in 1854 on the Victorian goldfields and lasted just six days. The flag has been used as a symbol of protest by diverse organisations and individuals.

The makers of the flag are unknown but it is believed to have been sewn by a group of women on the diggings shortly before it was raised for the first time on 29th November 1854 at a "monster" protest meeting of miners held on Bakery Hill which was organised by the Ballarat Reform League. It later flew over the diggers' stockade during the Eureka rebellion. This confrontation between soldiers and miners occurred as a result of the injustices of the gold licence fees and the administration system imposed on the goldfields population by the government. The ensuing battle became legendary as a defining moment that shaped Australia's history. It had a profound impact on society at the time, encouraging drives for constitutional reform, and has become a legendary and heroic Australian symbol for democracy.

A Canadian gold miner Captain Ross is believed to have suggested the design of the stars of the Southern Cross.Various early forms of the flag had been used in Australia prior to Eureka, notably by the anti-Transportation League of the 1840s.

After the rebellion on 3 December 1854, the flag was captured and taken to the Government Camp, where it was trampled on and pieces were removed as souvenirs. The flag appeared as part of the Crown evidence at the Eureka treason trials in early 1855. It was retained after the trial by John King, the policemen who had captured it, as his personal trophy. King later settled as a farmer near Minyip and occasionally showed the flag at country bazaars in the area. In 1895, James Oddie, President of the Ballarat Fine Art Gallery, obtained the Eureka flag on loan from the King family. The flag underwent conservation in 1971-72 and was placed on display in its own space within the Gallery. It was unveiled by the Prime Minister the Hon. Gough Whitlam, M.P. on 3 December 1973. In September 2001, the King family presented the flag to the people of Ballarat on condition that it be kept at the Ballarat Fine Art Gallery.

The Eureka Flag is of historical and social significance to the State of Victoria.

The Eureka Flag is of outstanding historical significance for its association with the Eureka Stockade, the armed rebellion in Ballarat on 3 December 1854.

The Eureka Flag is of social significance as a symbol of the Eureka rebellion, providing the community with a relic of this significant national event and a symbol of Australian democracy.

The eureka flag is not located at the art gallery anymore, it is now at the museum of australian democracy at eureka