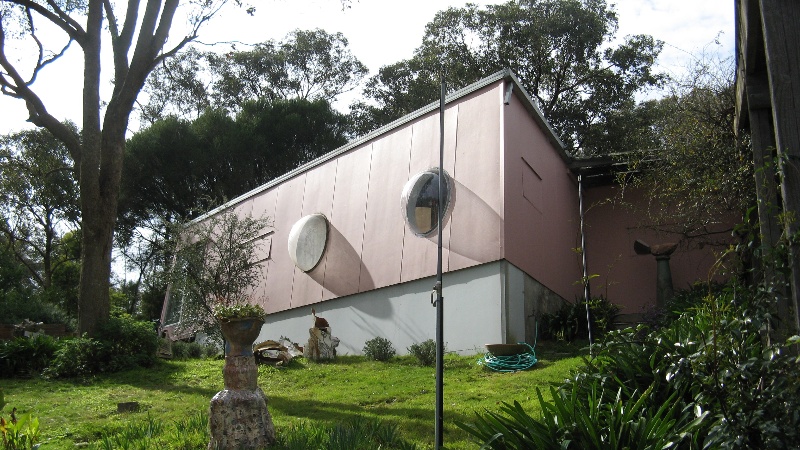 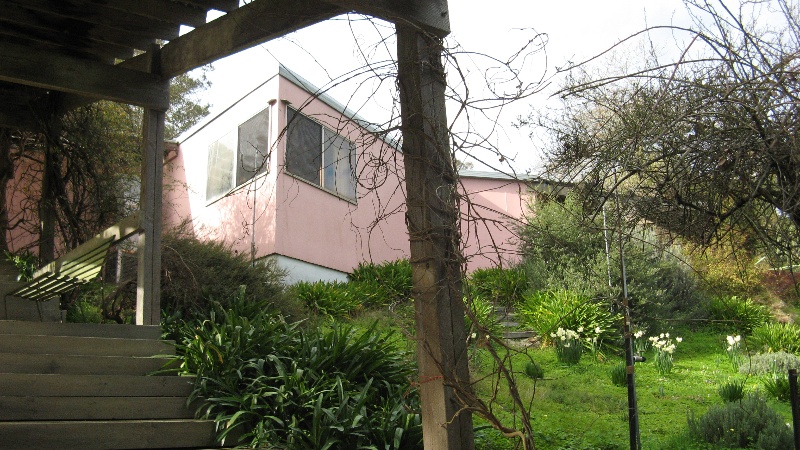 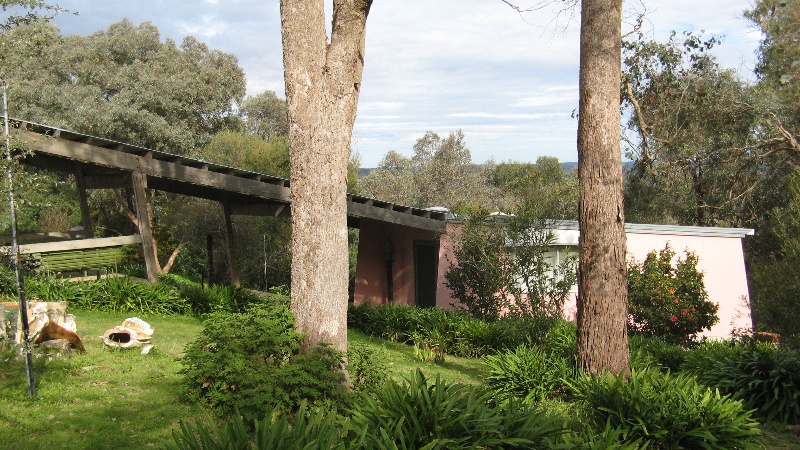 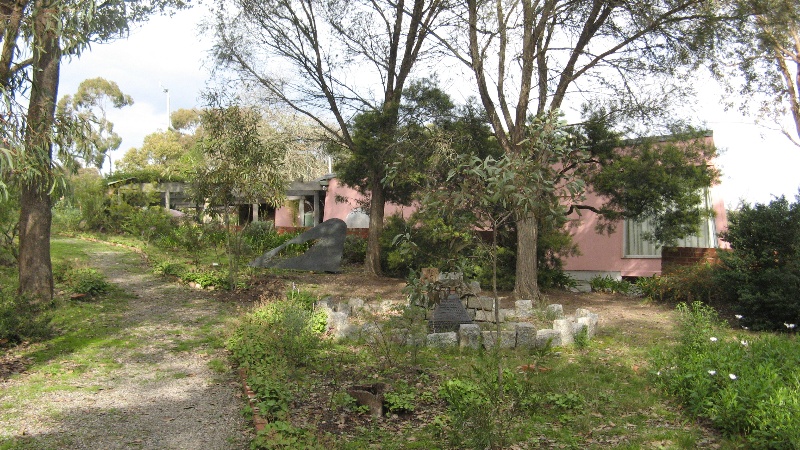 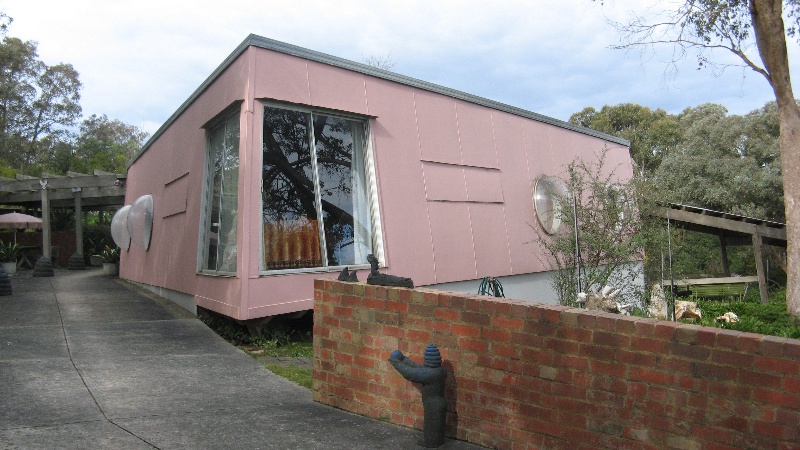 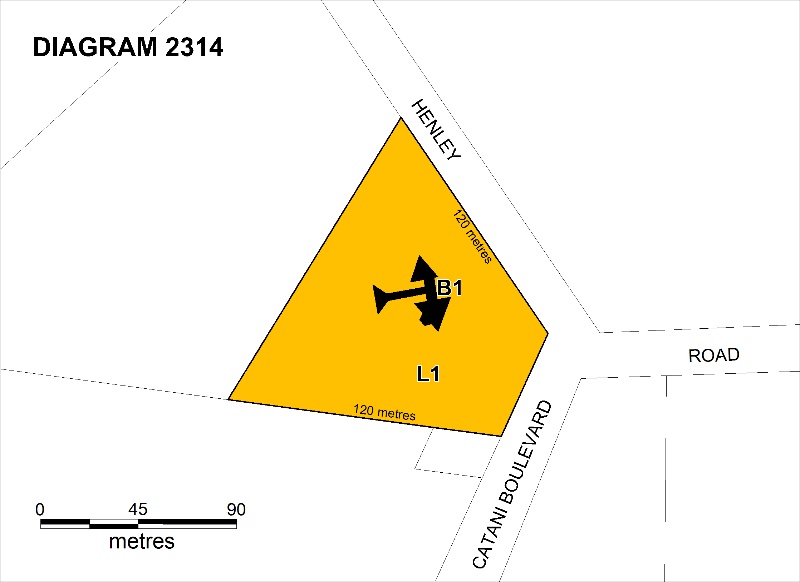 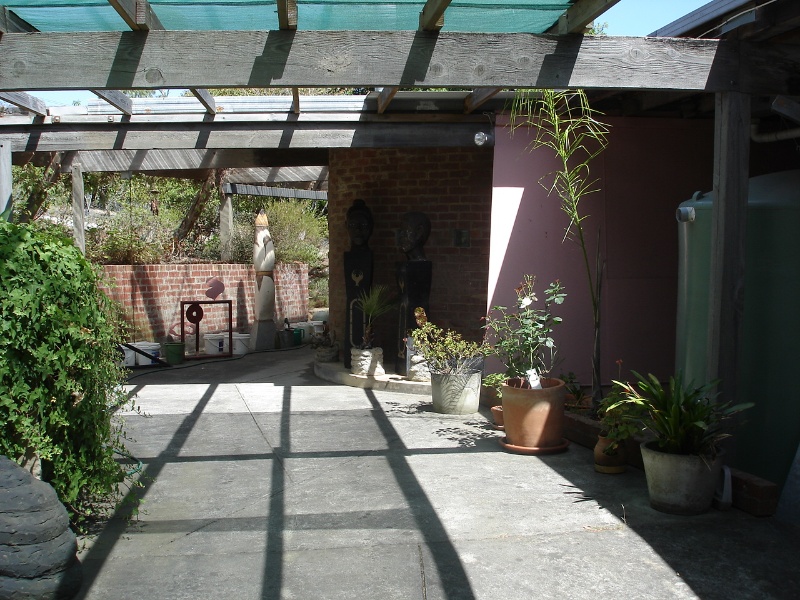 The Burns house, known as 'Kangaroo', was designed by the architect and artist Peter Burns and built in stages from 1968 on an elevated sloping bush site about 40 km north-east of Melbourne.

Peter Burns (born 1924) trained as an architect but was also a successful artist and graphic designer. The houses designed by him in the post-World War II decades contributed to Melbourne's reputation as a site of architectural innovation. He founded and was the first editor and designer of the influential journal Architecture and Arts, was an active member of the Contemporary Art Society, and a prominent member of Melbourne's artistic avant-garde. The land at Kangaroo Ground was purchased by Burns and his wife Mary in 1966, in the area near Eltham which had been popular a retreat for artists since the early twentieth century. The first stage of the house, in the form of a small equilateral triangle, was built in 1968 as a weekender for the Burns family. Typical of Burns' houses it was designed to give a feeling of stability, repose and protection, with walls sloping inwards at the top and minimal openings to the exterior. The house was discussed by Robin Boyd in Architect in 1971, and featured as the House of the Week in both The Age and The Australian Women's Weekly in 1972. A second triangular building and a connecting gallery were added in 1973, when it became the family home, and a triangular guest house was added in 1976 down the slope to the west, connected to the upper gallery by a covered walk way. A circular swimming pool and a tennis court were also constructed at this time. Minor additions were made to the house in 1980 and 1986. The house is still the Burns family residence. Between 1987 and 2001 the Burns held in the grounds of their house the annual Kangaroo Award for Sculpture, a major competition for contemporary sculptors.

The Burns house 'Kangaroo' is made up of three linked triangular-plan pavilions set in informal gardens, established largely by Mary Burns, and is surrounded by bushland sloping down to the Yarra Valley. Reflecting the relative austerity of the period and the lack of resources of the family it was built using cheap materials, with walls clad externally and internally with fibro, and with Stramit system ceilings and a roof of steel decking. The house has a number of design features that characterise Burns' house designs, including the inward sloping walls, acrylic dome windows and flaps for ventilation. It was designed not to blend in with the bush setting but 'as a gesture to come to terms with nature'.

The Burns house 'Kangaroo" is of architectural and historical significance to the state of Victoria.

The Burns house 'Kangaroo' is architecturally significant as a reflection of the diversity and innovation of the multiple architectural streams that emerged within late modernism during the post-World War II period. Modernism was then being challenged across all artistic disciplines, and in architecture greater consideration was being given to buildings as an emotionally and psychologically nurturing context for human activity. It reflects both the experimentation with form and materials typical of this period and the relative austerity of the times, in the use of low-cost materials such as fibro, which reached its peak of popularity during the 1960s.

The Burns house 'Kangaroo' is historically significant for its association with Peter Burns, an architect, painter, sculptor and graphic designer, described by Robin Boyd as a 'man for all media'. He was an active promoter and commentator on architecture and the visual arts, as well as a practitioner. He was a central figure in Melbourne's post-war modernist avant-garde and made a unique contribution to the artistic and cultural life of Melbourne at the time. This house reflects Burns' idiosyncratic approach to design and his concern with buildings as enclosed places of refuge, which he likened to caves.