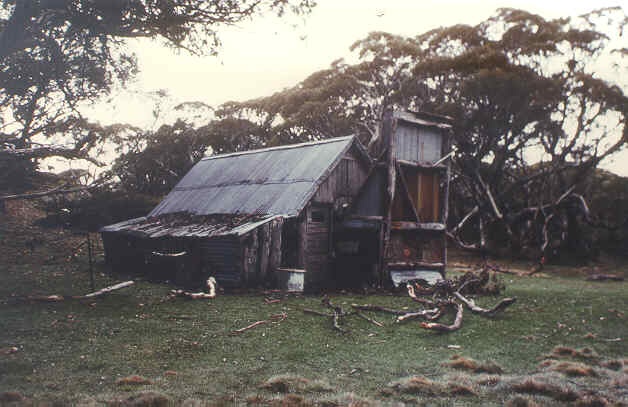 What is significant?
Wallaces? hut was built in 1889 and is probably the oldest surviving hut on the high plains of north-east Victoria. It was built in six weeks by Irish immigrant brothers Arthur, William and Stewart Wallace among old snow gums on a grassy plain above the snowline. The brothers held grazing leases on the High Plains, and the hut was built to provide shelter for the cattlemen working there. The timber was cut from the forest about four hundred metres east of the hut, and the hearth stone was dragged in from Pretty Valley. The chimney had a base of rubble and above this iron sheeting on a timber frame. The slab walls were lined with hessian and later with tar-paper, and inside there was a bush table, sleeping platform and a rustic fire-side settle. The hut was used by many local cattlemen, as well as stockmen from New South Wales, who brought sheep here during the 1914-18 drought. Many such huts were built in mountain areas, but they were flimsy structures, and at great risk from bush fires, and no others have survived from the nineteenth century. The State Electricity Commission used the hut from the late 1920s until the early 1940s to collect data on precipitation for possible future hydroelectric works, and SEC employee Joe Holsten covered the roof and later the walls with corrugated iron, renewed the chimney and added a skillion for storing firewood and horse feed. In the 1940s the Rover section of the Boy Scout Association took over responsibility for maintenance, and it became an important refuge and destination for walkers and skiers.

Wallace?s Hut is a rectangular gabled vernacular slab hut, 6.3 by 3.5 metres, with a skillion on the west side. It is a single room with a fireplace and door at the south end. It has a frame of snow gum poles, walls of snow gum slabs, a floor of split logs, split palings in the gable, the roof is covered with woollybutt shingles, now under corrugated iron, and the large fireplace and hearth are of rubble. The original bush table, shelves and mantelpiece survive. Many pioneer cattlemen burned their names into the timber of the roof beams and behind the mantelpiece. The increasingly intense use of the hut by walkers and skiers has meant frequent repairs, and as a result much of the fabric, and also the form, have changed considerably since it was built. The length appears to have been increased, a skillion added, the roof shingles covered with corrugated iron, the paling clad chimney lost, and new wall slabs and a side window added.

How is it significant?
Wallace?s Hut is of historical and architectural significance to the State of Victoria.

Wallace?s Hut is architecturally significant as one of the few nineteenth century vernacular slab buildings surviving in Victoria, and is important for its demonstration of vernacular construction techniques.
[Online Data Upgrade Project - 2004]

Easy 750m walk from the car park, currently undergoing restoration so no access inside the hut.