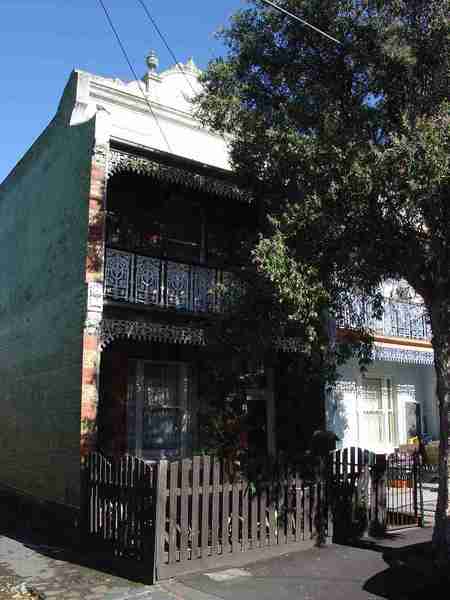 The area of Abbotsford bounded by Church Street, Victoria Street (originally known as Simpson's Road) and the Yarra River had been partly subdivided before 1854. (49) Little development had occurred before the 1880s but by 1895 MMBW plans show that the whole of Abbotsford east of Church Street had been subdivided and almost completely developed. Industrial buildings lined the Yarra River banks while rows of workers' housing were built in Church, Fairchild, Cooke, and Nelson Streets.

Land in Cooke Street, between Nelson and Victoria Streets remained mostly vacant until part of it was developed into eight terraces by A Cook in 1887 (15-29 Cooke Street). A further nine terrace houses, (18-32) were constructed there in 1888. Thomas George built four two-storey brick terraces (1-7 Fairchild Street) in 1888 and the east side of Fairchild Street was developed by Thomas Stanford in 1887-88 with a row of single-storey brick terraces (2-24 Fairchild St).

The main development period evident in the heritage overlay is that of the Victorian era with a substantial contribution from the Edwardian-period. There is also an added contribution from individually significant places of all eras.

. Public infrastructure, expressive of the Victorian and Edwardian-eras such as bluestone pitched road crossing and lane paving, stone kerbs, and channels, and asphalt paved footpaths

. As a remnant microcosm of Victorian and Edwardian-era residential building stock which once typified the area before later industrial development;

. For its association with significant early development and cultural phases in Abbotsford's history, and as a physical representation of modest workers' housing associated with local industry;

. For its unusual consistency of cultural features, containing substantially intact rows of modest workers' housing dating from the late nineteenth and early twentieth century, including a number of speculatively developed brick terrace rows;

. For the early street, lane and allotment layouts, together with some original bluestone kerbs, guttering and lane paving survive, providing an appropriate setting for this collection of buildings.