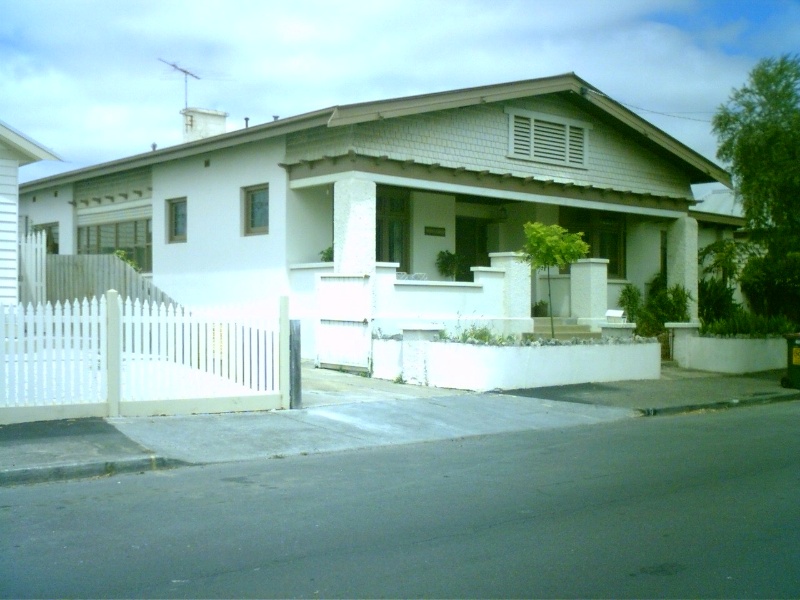 The house is built externally of unpainted rendered brickwork with shingled gable ends and a corrugated iron roof. The prominent projecting gable end forms an entry porch with a balustrade of concrete in a stepped profile. The fence is of random stones set on a concrete base. The western side of the front elevation has an open porch which has been glazed-in to make a 'sleep out'. Externally this appears to be the only alteration. Internally the house is very close to its original condition with only the kitchen and bath room modernized. Internal joinery is typical of the period with dark stained skirtings and architraves, doors and dado panelling. The dining room has a most unusual leaded glass elliptical domed skylight. There are numerous built-in joinery fittings of high quality, original light fittings and switch plates; and the brass plate bearing the name of R/L/ Clement still remains at the front door. The garden contains many plants, for example succulents, that would have been popular for gardens at the time of building.

The stylistic derivation of this building appears to be largely American through the followers of the Prairie School of Frank Lloyd Wright in Chicago. This school of design is characterized largely by the use of low pitched spreading roofs and rustic materials (timber, rough stone or concrete). In addition, the detailing of the timber gable ends and the exposed rafter ends is reminiscent of the work of Greene and Greene, west coast American architects. The bungalow style is derived jointly from several sources. The Americans embraced the style wholeheartedly during the period between the two world wars but it is rare to find such a pure example in Victoria.