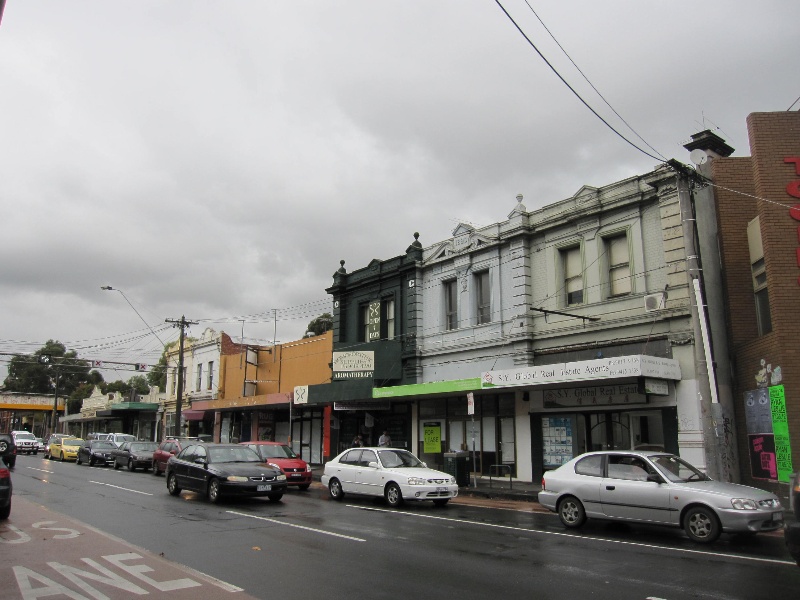 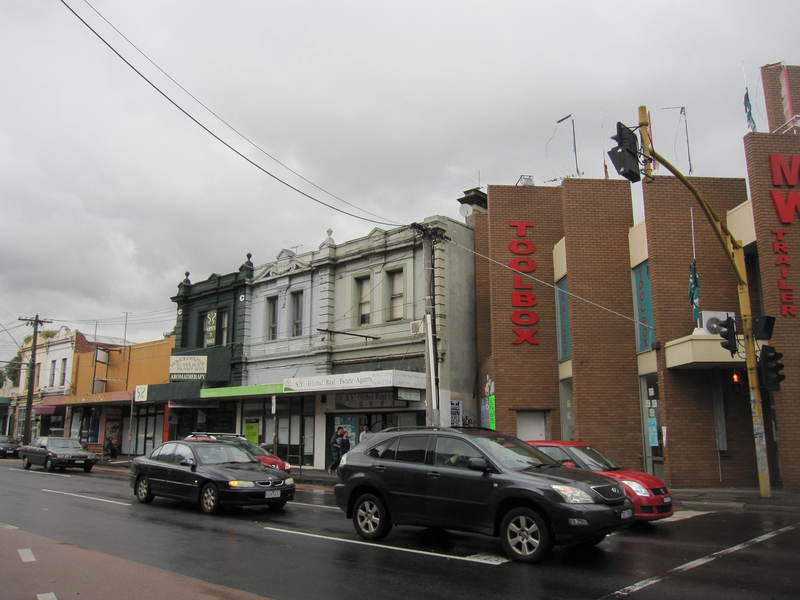 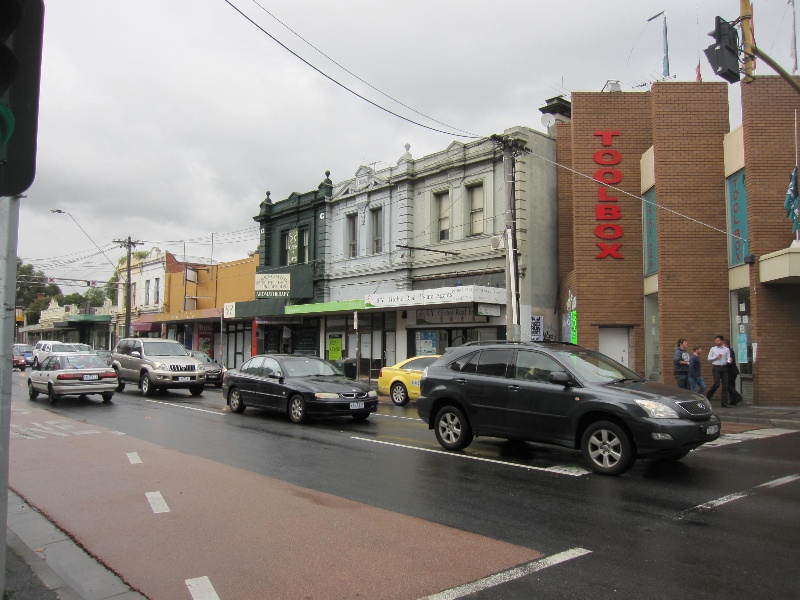 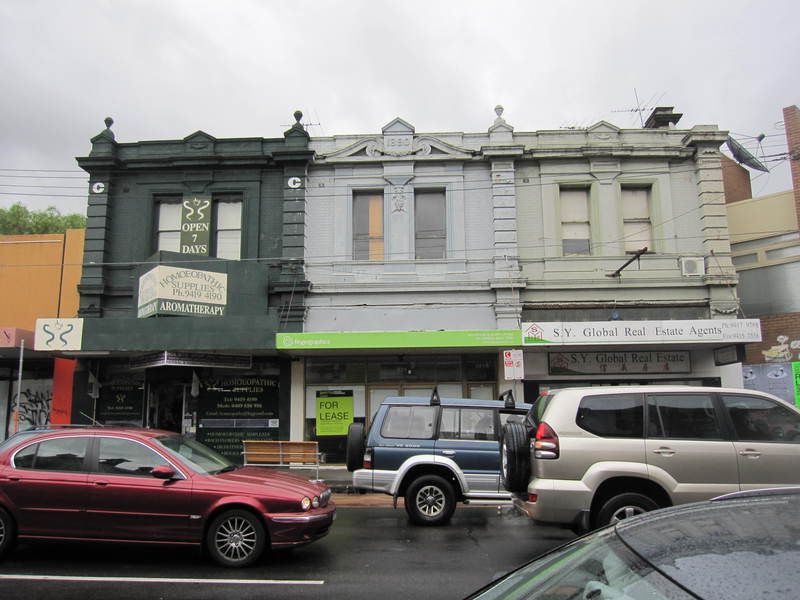 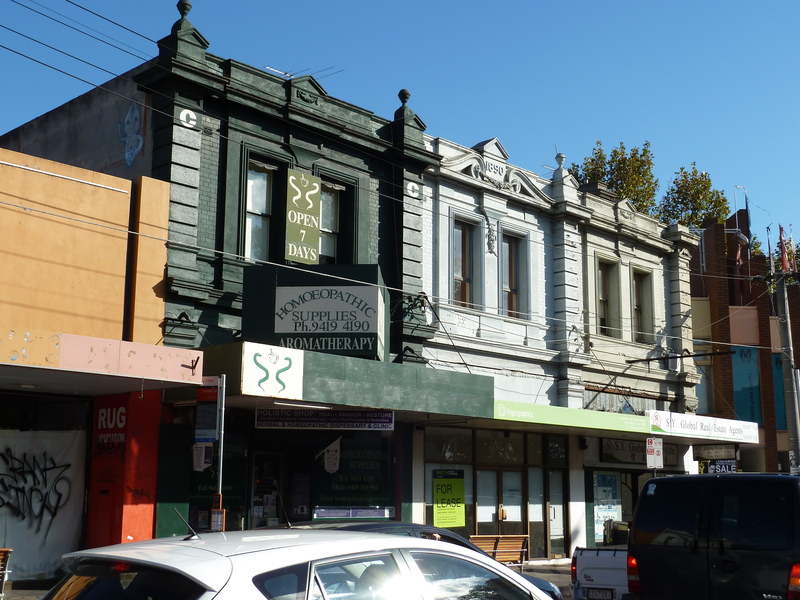 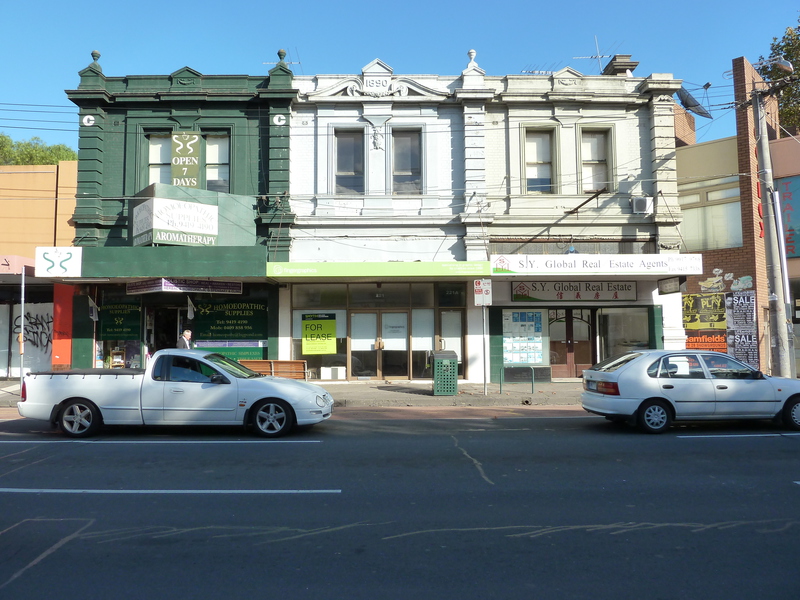 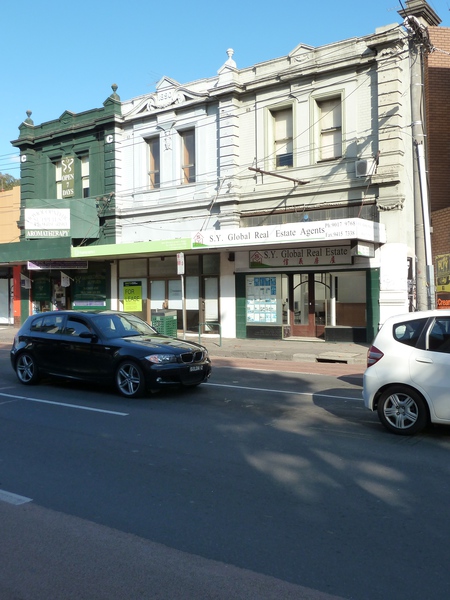 What is significant?
Nos 219-223 Johnston Street, Abbotsford, is a terrace group of three, two storey masonry shops and combined residences constructed in c.1890. The buildings have overpainted brick and stuccoed external walls; separate hipped roof forms clad in corrugated steel; and chimneys. The centre bay of the first floor facade has a scroll bracket bearing the construction date '1890', scroll consoles and a broad floral swag. The three shops are divided at first floor level by heavy rusticated piers with coffered panels at the top, under a prominent moulded cornice capped above by a gabled finial pedestal. Other details of the first floor include windows placed within shallow breakfronts, and window architraves supported on a stringcourse set above breakfront piers. The central dating panel breaks through the parapet line with a triangular pediment, supported in the flanking bays by a simpler corbel with coffered frieze and smaller breakfront entablatures holding a small swag. The clerestories to no. 221-223 have been covered over or infilled, although no. 219's clerestory panes remain intact. The ground floor shopfronts have been remodeled although no. 219's shopfront is of quite long standing.

How is it significant?
Nos 219-223 Johnston Street, Abbotsford, is of local historical and aesthetic/architectural significance.

Why is it significant?
Nos 219-223 Johnston Street, Abbotsford, is of local historical significance, as a trio of two storey masonry shops and combined residences constructed in c.1890. This was the period following the introduction of the cable tram service to Johnston Street in 1887, and the opening of the nearby railway station in 1888. The south side of Johnston Street was established as a retail precinct by the early 1880s, with these buildings coming after that period, but consistent with the consolidation of commercial development on the north side of the street, near Hoddle Street. The buildings were subsequently occupied by a range of retailers and commercial operations typical of a late nineteenth and early twentieth century main street, including a hairdresser, stationers, and a tailor; the association with hairdressing was long-standing. Thorold Merrett, a famed Collingwood footballer, also opened his first sports store at no. 223 in the 1960s, the start of an early but successful sports store chain.

Nos 219-223 Johnston Street, Abbotsford, is also of local aesthetic/architectural significance. The trio is a well-preserved group of Victorian two storey masonry shops and residences. Although broadly consistent with many nineteenth century two-storey shop and house combinations, in inner suburban main road locations, including the modified ground floor shopfronts, the buildings are nevertheless distinguished by the Victorian Mannerist first floor facade. Characteristics of the style, as seen here, include the 'free' use of the classical system (classical orders) in terms of the placing and application of details, and also proportion. The detail of the first floor facade is particularly well preserved, and comparatively understated in comparison with similar commercial buildings in Melbourne of the same period. No. 219 retains an older shop front and its original clerestory.