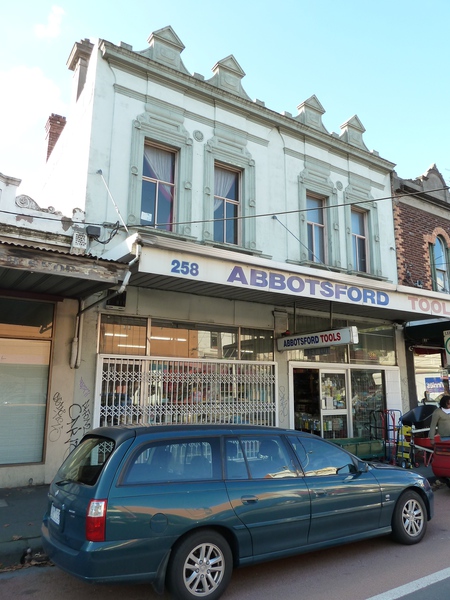 What is significant?
Nos 258-260 Johnston Street, Abbotsford, is a terraced pair of two storey rendered masonry Victorian shops with combined residences. The south street facade has a stuccoed, overpainted and elaborately detailed first floor with a pair of shallow breakfronts to each bay, and moulded string courses running across each breakfront. Other details include window aedicules; ventilators integrated with rosettes between each aedicule; moulded portals to the sides of each window and across their heads, and moulded bosses at each corner and halfway up; bowed cushion panels; moulded stringcourses; and a parapet with six pedestals and four steep-sided pediments in the form of twin pediments to each parapet. The visible west side wall is in overpainted brick; the roof is hipped and punctuated by cement dressed chimneys with moulded cornices at the front, and exposed face brick chimneys with stepped brick cornices at the rear. The ground level shopfronts are not original.

How is it significant?
Nos 258-260 Johnston Street, Abbotsford, is of local historical and aesthetic/architectural significance.

Why is it significant?
Nos 258-260 Johnston Street, Abbotsford, is of local historical significance, as a pair of two storey masonry shops and combined residences constructed in c.1890. This occurred after the introduction of the cable tram service to Johnston Street in 1887, and the opening of the nearby railway station in 1888. While the south side of Johnston Street was established as a retail precinct by the early 1880s, businesses on the north side near Hoddle Street were consolidating around 1890. The subject buildings were subsequently occupied by a range of retailers and commercial operations, typical for a main street of the late nineteenth and early twentieth century, including a grocer, fruiterer, delicatessens and small goods retailers.

The pair at nos 258-260 Johnston Street is also of local aesthetic/architectural significance. They are well-preserved buildings, broadly consistent with many nineteenth century two-storey shop and house combinations in inner suburban main road locations, including having modified ground floor shopfronts. However, the buildings are distinguished by their elaborately detailed first floors. Notable elements include the steep-sided triangular pediments which are a typical 1890s 'Queen Anne' detail. The stuccoing to first floor level has been executed with subtlety, particularly in the shallowness of each breakfront. There is also an emphasis on fine line and shallow plane recession, which results in a lighter gauging (or depth) to the detailing than was seen in earlier 1880s Renaissance Revival shop frontages in inner Melbourne. Further, the twin pediments to each parapet are eye-catching, drawing attention to these buildings in the crowded Johnston Street context.