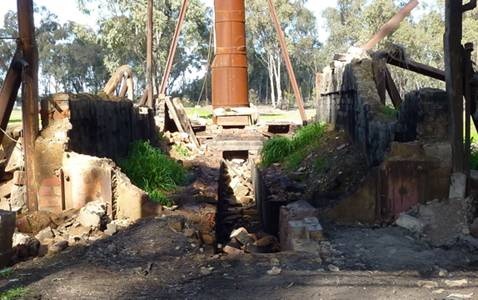 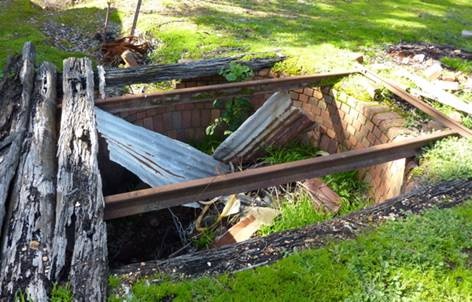 Hooper's eucalyptus distillery, established in the 1970s south of Neilborough, extends over a large clearing in the Mallee scrub. The disused distillery, including a dam, metal gantry, metal stack and brick boiler housing, are located to the east of the road access. A large ash dump is to the south of the stack and boiler housing. To the west of the access road is a hut, which was most likely used for accommodation for eucalyptus cutters, and agricultural outbuildings, for the Hoopers' livestock.

Extant site elements include the former boiler housing, which is covered by an open-sided metal-framed enclosure with corrugated galvanized metal roof, a tall metal circular stack (presumed to be a relic of the gold mining industry) and a metal-framed drive-through gantry, as part of the mechanisation of the plant. The motor that powered the pulley is extant, as are timber and platforms to either side. Associated elements at the site include the condensing dam, a timber railway good truck/carriage and an in-ground brick-lined vat. The latter provides evidence of the pre-mechanisation origins of the plant. A large ash dump is to the south of the distilling plant, demonstrated by the absence of any natural growth, a result of the acidity of the burned eucalyptus leaves.

Hooper's eucalyptus distillery is of local historical and technological significance.

Hooper's eucalyptus distillery is historically significant (Criterion A) for its capacity to recall an industry that played a significant role in the economy of the Whipstick, and broader areas of regional Victoria, from the 1890s to the late twentieth century. The harvesting and distilling of eucalyptus was an important source of employment for workers following the decline of mining and became particularly important during the Depression of the 1930s, when there were an estimated 50 distilleries in the Whipstick, the epicentre of the industry in Victoria. By 1986 there were an estimated four operational distilleries in the area. Today, Hooper's eucalyptus distillery is a rare (Criterion B) surviving example of its type. The Hooper's plant was established in the 1970s and adapted to a mechanised system of production in c. the 1950s. It was a long-running operation, being the last distillery in the Whipstick to close, in 2009. Technologically (Criterion F), Hooper's eucalyptus distillery is significant for its capacity to demonstrate aspects of eucalyptus distilling from the pre-World War I period through to the early twenty-first century. The site, with its remnant structures and machinery, and its evocative setting within the natural environs of the Whipstick, recalls the specific technologies developed for an industry based in isolated areas of Victoria, and often run by small-scale operators with limited capital (Criterion D). The site retains evidence of two types of distillation, the traditional approach of in-ground brick-lined vats, and the later post-World War II truck-mounted vat distillation. These two approaches are represented by the brick-lined vat and the gantry that carried the lid of the truck-mounted vat. Other significant remnant elements at the site include the tall circular metal stack, presumed to be a relic of the gold mining industry, the dam, ash dump and remains of the brick boiler housing.