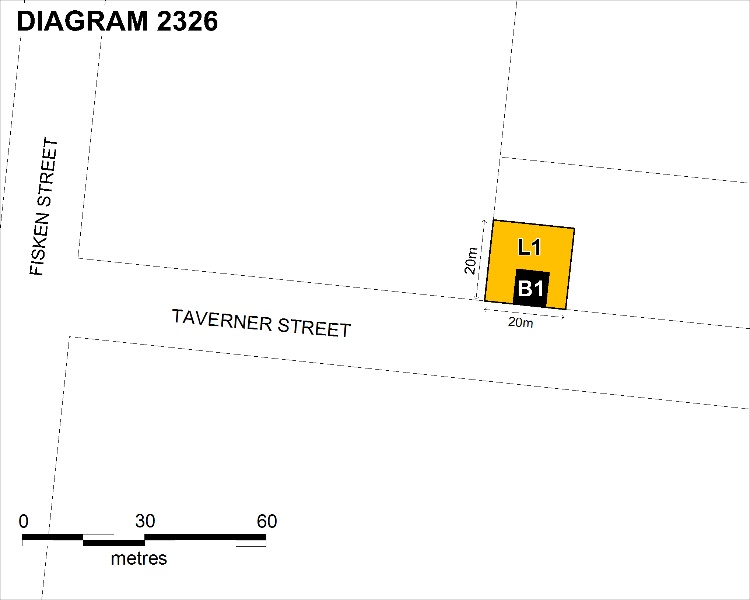 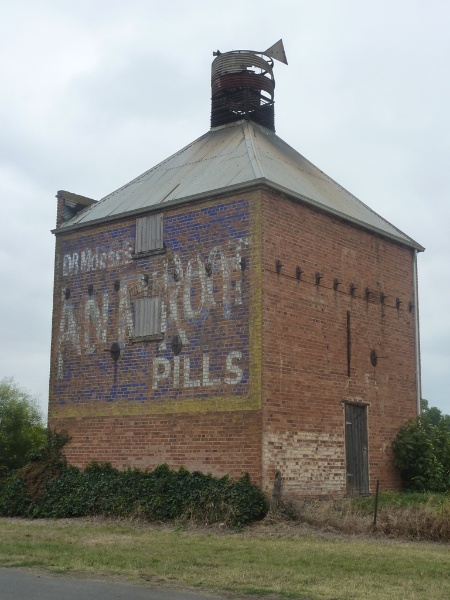 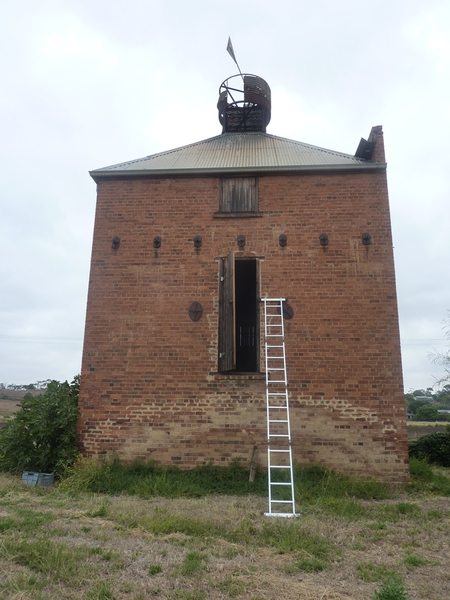 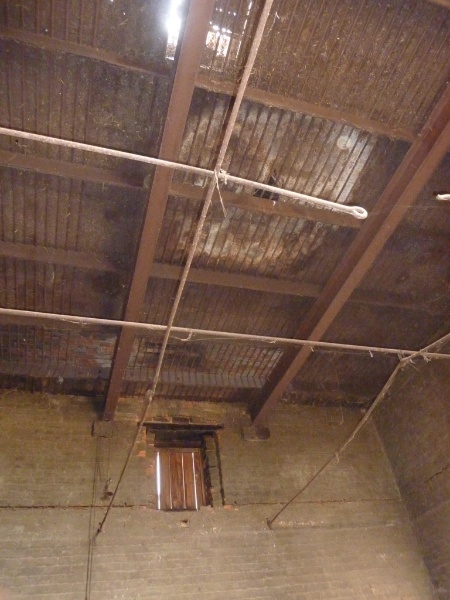 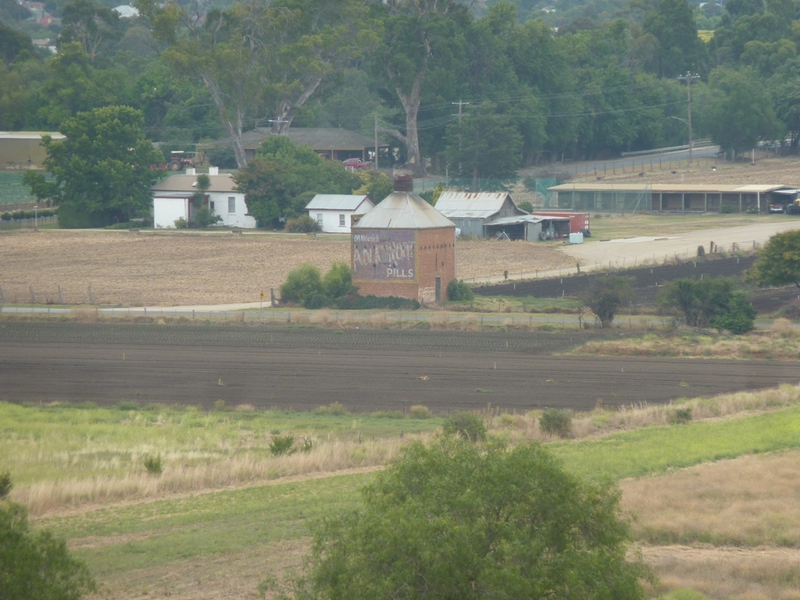 The Chicory Kiln at Maddingley, south of the Werribee River at Bacchus Marsh, is a large brick structure that was built in 1885 for the process of drying chicory roots.

Chicory was grown in Victoria from the 1860s to the 1960s for use as a coffee substitute and additive, with production centred largely on Phillip Island and French Island. Kilns were constructed to dry the roots of the chicory plant to reduce the weight and bulk for packing and transporting to Melbourne for roasting and grinding. Of thirty three kilns known to remain in Victoria, twenty eight are located on Phillip and French Islands and one in Bacchus Marsh. Chicory was grown in Bacchus Marsh from as early as 1867 by the Pearce family, owners of the first general business store in Bacchus Marsh, and by 1877 T G Pearce had installed innovative equipment to irrigate his crops, including chicory, with water from the nearby Werribee River. In 1885 the Pearce brothers constructed a brick chicory kiln with associated equipment on their property. After much agitation from farmers in the district, the railway line from Melbourne was finally extended to Bacchus Marsh in 1887, providing convenient transportation for the dried chicory. Chicory was a labour-intensive crop and by the 1890s its production in Bacchus Marsh had declined. Pearce established an extraction plant at his kiln in 1895 for the processing of another crop: sugar beet. By the 1910s the kiln was recorded as disused.

Constructed on the Taverner Street boundary of a farming property in Maddingley, immediately south of Bacchus Marsh and about 200 metres south of the Werribee River, the chicory kiln stands alone with no associated shedding, wash trough or other equipment remaining on the site, though archaeological evidence for these may survive. It is a large, square, red brick building, constructed in colonial bond brickwork, and set on bluestone and sandstone foundations. It has a hipped corrugated galvanised iron roof and a crowning cylindrical, corrugated iron vent. The western wall of the kiln is parapeted while the other three walls are eaved. The drying floor is situated about three-quarters of the height of the kiln above ground level and comprises a wire mesh rack supported on iron beams and rafters. A number of original window and door openings remain, generally at ground level and at the level of the drying floor.The south facade, which faces the road and the railway line beyond, features a large painted advertising sign for 'Dr Morse's Indian Root Pills'. This sign is highly visible from the railway line and probably dates from the mid to late 1890s when advertisements for this medicine first appeared in Victorian newspapers. The kiln was originally fitted with a root slicing disc, elevators to take the cut root to the drying floor and bagging facilities. The brick kiln was constructed by Mr J F Taylor and carpenter, Mr Murphy.

The Chicory Kiln, Maddingley satisfies the following criterion for inclusion in the Victorian Heritage Register:

The Chicory Kiln, Maddingley is significant at the State level for the following reasons:

The Chicory Kiln at Maddingley is historically significant for its associations with the early chicory industry in Victoria. Chicory was commonly grown at Phillip and French Islands and to a lesser extent at other Victorian locations, and the kiln at Bacchus Marsh demonstrates the early evolution in the chicory industry of drying the crop to enable easier and cheaper transportation. [Criterion A]

The Chicory Kiln at Maddingley is the largest known chicory kiln in Victoria and is the oldest remaining substantially intact example of its kind in Victoria. Built in 1885 by a professional builder, the kiln was of considerable size. Later kilns tended to be of a smaller, more uniform size, as the design was refined for maximum efficiency. The majority of kilns remaining in Victoria were constructed in the twentieth century. [Criterion B]

The Chicory Kiln at Maddingley has the potential to contain historical archaeological deposits, features and/or objects associated with previous uses which could reveal further information about chicory production in Victoria. [Criterion C]

The Chicory Kiln at Maddingley is a fine and substantially intact building which displays the typical characteristics of this building type. The building retains its square brick structure, corrugated iron roof, cylindrical roof vent, many original openings and its internal iron supports and drying rack. Despite the lack of any associated shedding or equipment, the kiln is an important remnant of the chicory industry which clearly demonstrates an important aspect of the process of chicory drying. [Criterion D]

The Chicory Kiln at Maddingley is also significant for the following reasons, but not at the State level:

The Chicory Kiln at Maddingley is of local historical significance for its association with the early history of Bacchus Marsh and for its association with the locally important and progressive Pearce family. This family pioneered chicory growing and crop irrigation in the district and subsequently built the only known local kiln for drying chicory crops. [Criteria A & H]

The Chicory Kiln at Maddingley is of local aesthetic importance as a well known and highly visible landmark. Located in an isolated setting, the kiln can be clearly seen from the surrounding landscape, including the railway line constructed two years after the kiln. The latter is likely to have resulted in the painting of an advertising sign which covers the entire front facade and was highly visible from the passing trains. The kiln's aesthetic appeal is evident in its popularity as a local photographic subject, its use as a photographic backdrop, its appearance in numerous publications and its identification in the Melway Street Directory of Greater Melbourne. [Criterion E]