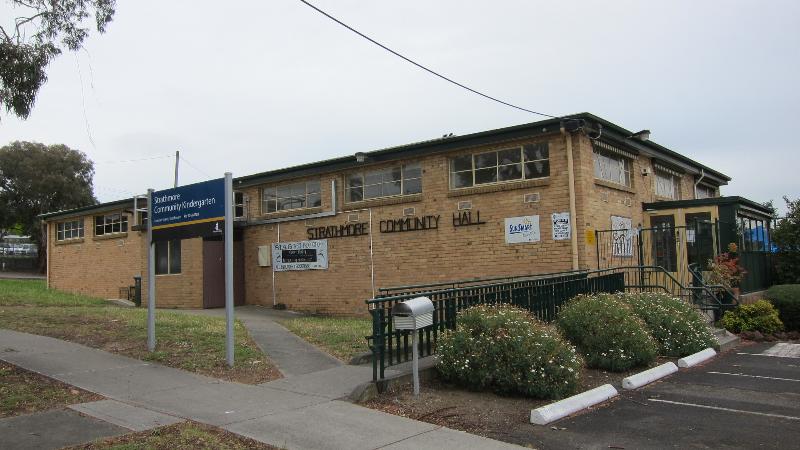 What is significant?
The Strathmore Community Hall, constructed in 1955, at 40 Loeman Street, Strathmore is significant. It is a post-war building constructed of cream brick with a low-pitch hipped roof with gablets. There are high-set windows in the front and side elevations, which have brick sills. Entry is via a flat roofed porch placed off-centre, which has timber doors. To the right of the entrance 'STRATHMORE COMMUNITY HALL' is spelt in metal letters attached to the wall.

How is it significant?
The Strathmore Community Hall is of local historic and social significance to the City of Moonee Valley.

Why is it significant?
It is historically significant for its associations with the development of Strathmore as a suburban area in the period after World War Two and is a reminder of the efforts of the former City of Broadmeadows and local residents to provide a community centre for Strathmore. It also significant for its associations with the Strathmore Community Association, which built the hall and developed the surrounding reserve and played an important role in the development of the local community for over 30 years. The connection with the Association is also demonstrated by the naming of the reserve in honour of the long-serving members, Max Johnston. (Criteria A & H)

It is also significant as a representative example of the simple, functional community halls that characterize the austerity of the 1950s. (Criterion D)

It is socially significant for its use as a community facility for over 50 years. (Criterion G)