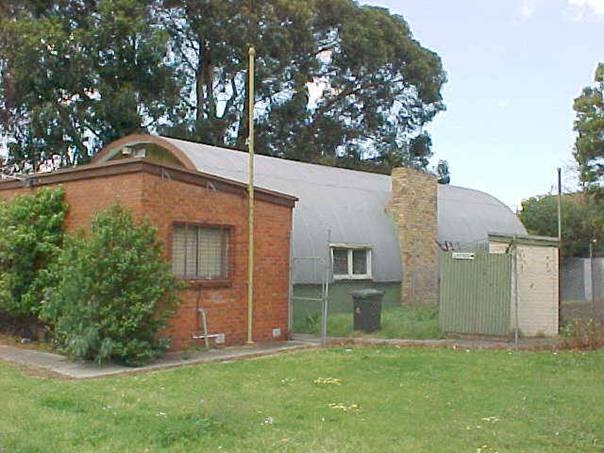 View of building from north-west

What is significant?
The former Scout Hall, erected between 1957 and 1960 for the First Strathmore Scout Group, comprises a Nissen-type prefabricated ex-army hut with a skillion-roofed brick wing across the street front.

How is it significant?
The former scout hall is of historical significance to the City of Moonee Valley.

Why is it significant?
Historically, the scout hall is a representative and relatively intact example what was a ubiquitous phenomenon in the 1950s and '60s, whereby prefabricated ex-army huts of barrel-vaulted form would be adapted to civilian use, typically with a new facade to create the effect of a permanent rectilinear building. Many of these buildings were intended as low-cost temporary accommodation solutions, and as such were subsequently superseded and demolished. Surviving examples of Nissen, Quonset and other ex-army huts of barrel-vaulted form, whether adapted to other purposes or still in military or government use, are becoming increasingly rare. Since the recent demolition of comparable huts at Essendon Airport, it appears to be unique in the City of Moonee Valley.