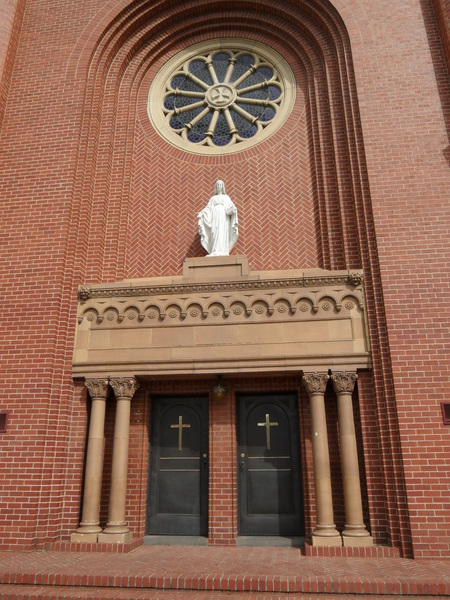 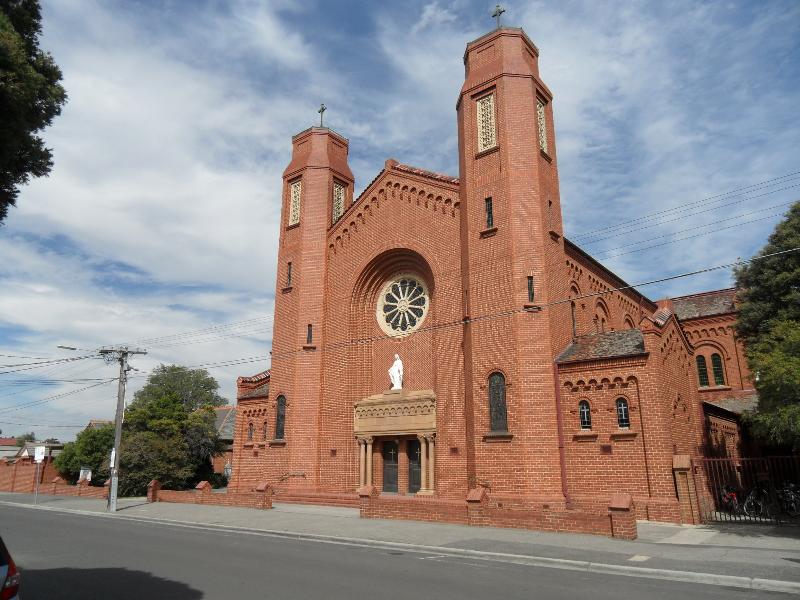 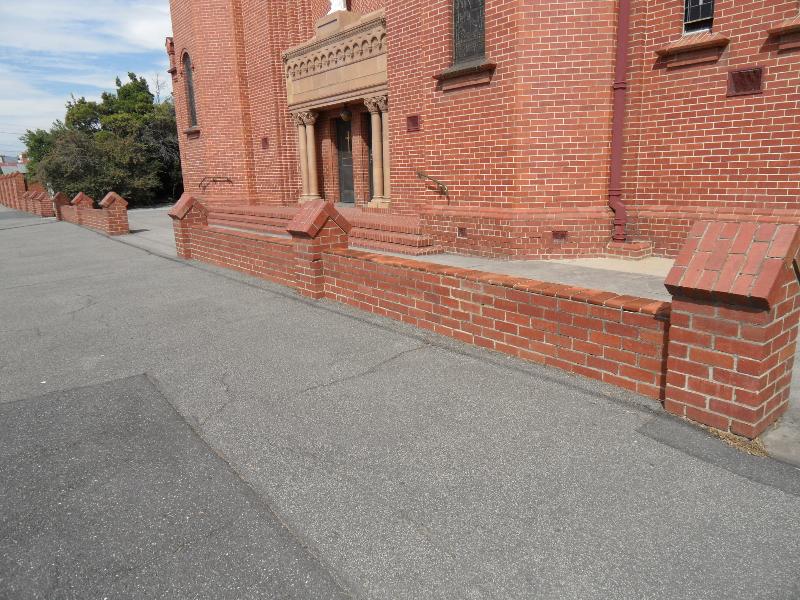 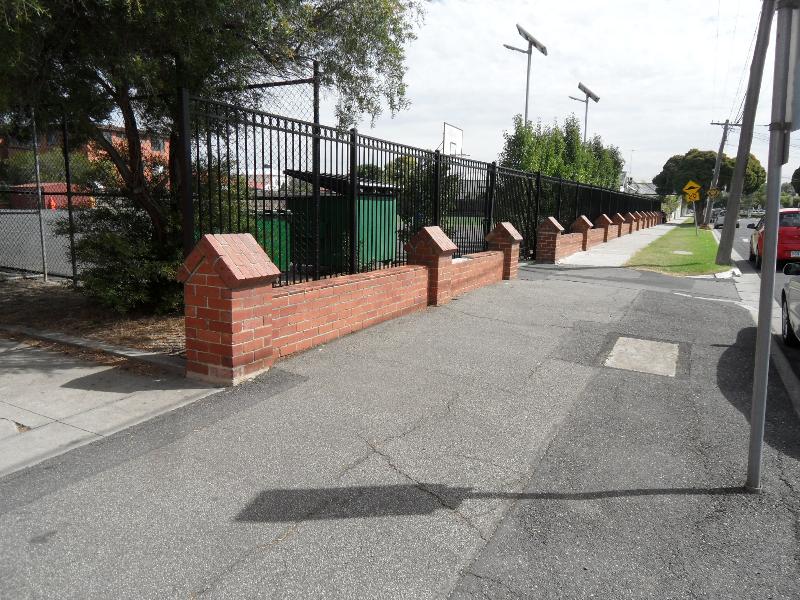 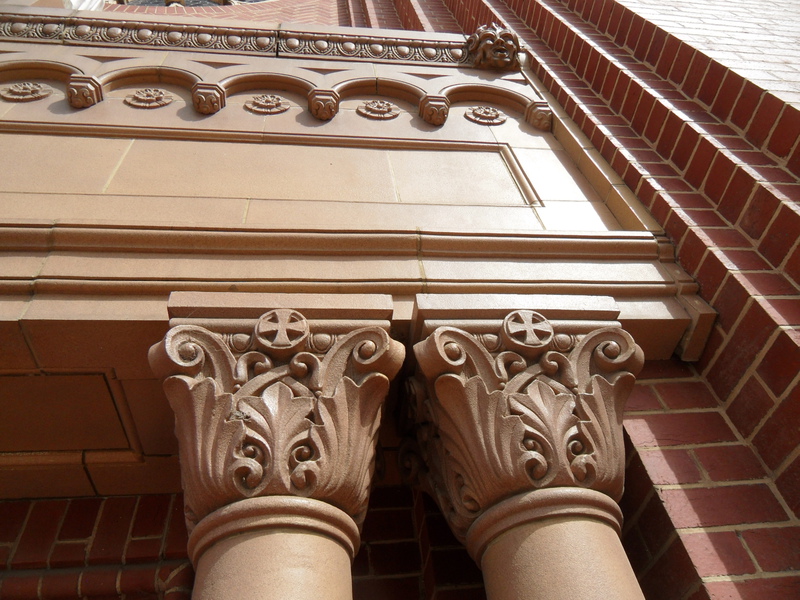 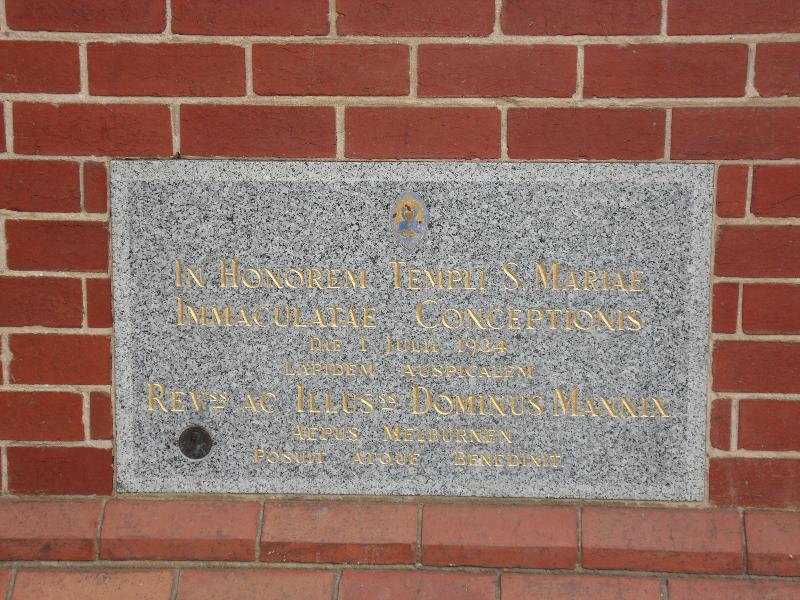 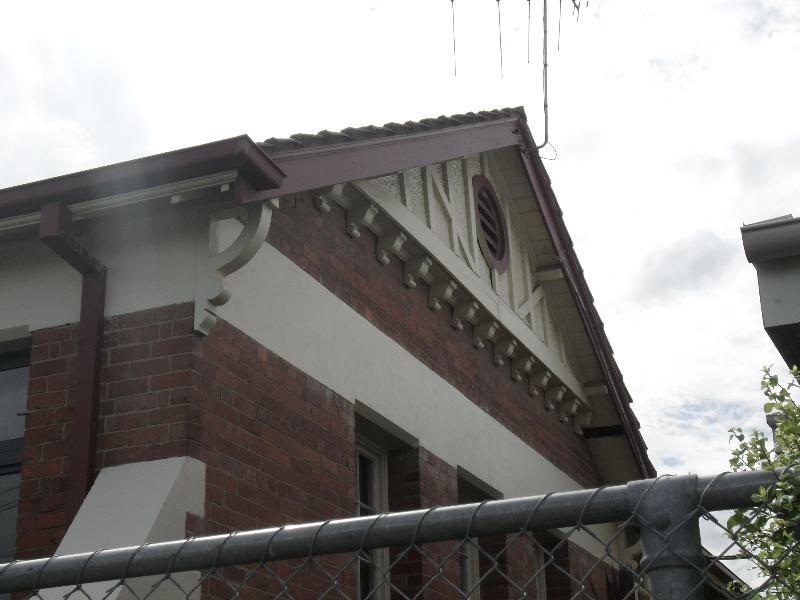 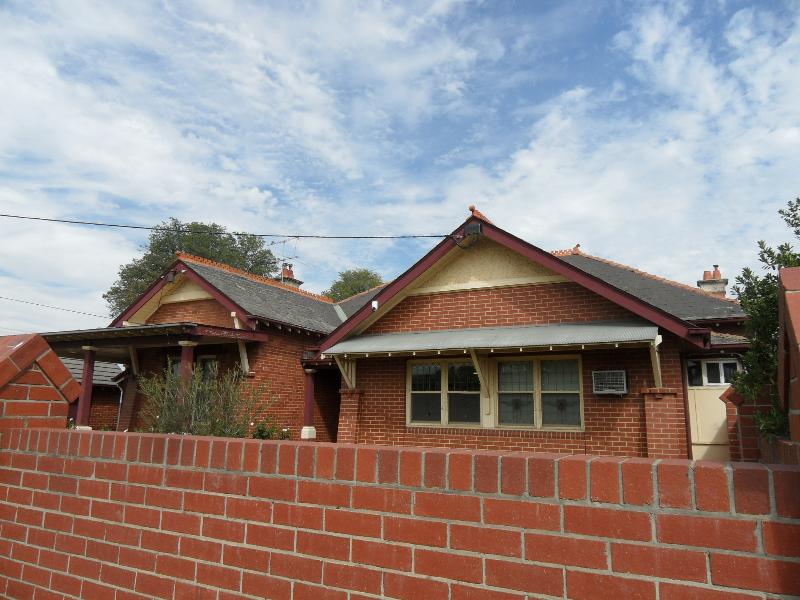 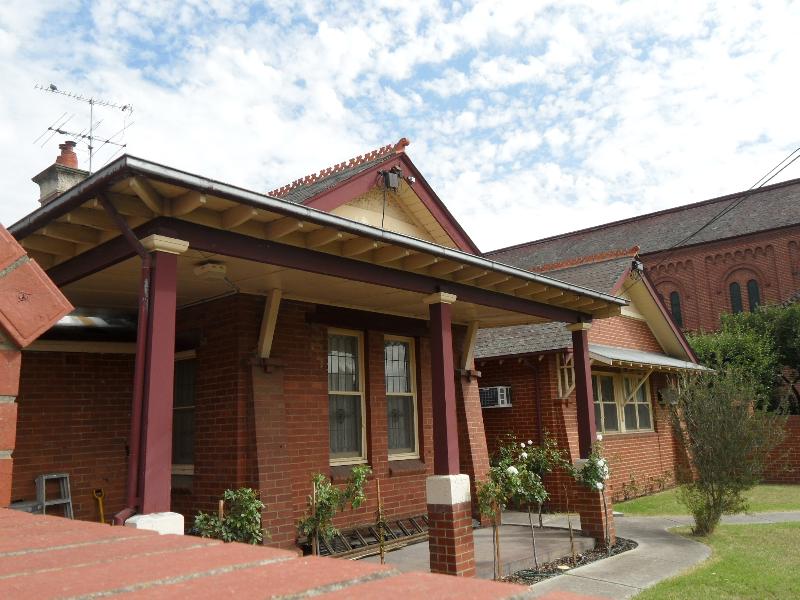 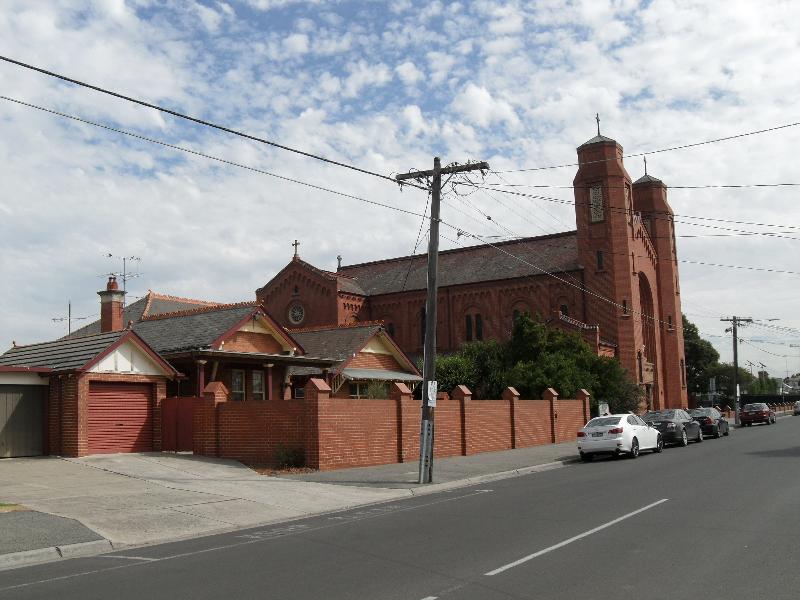 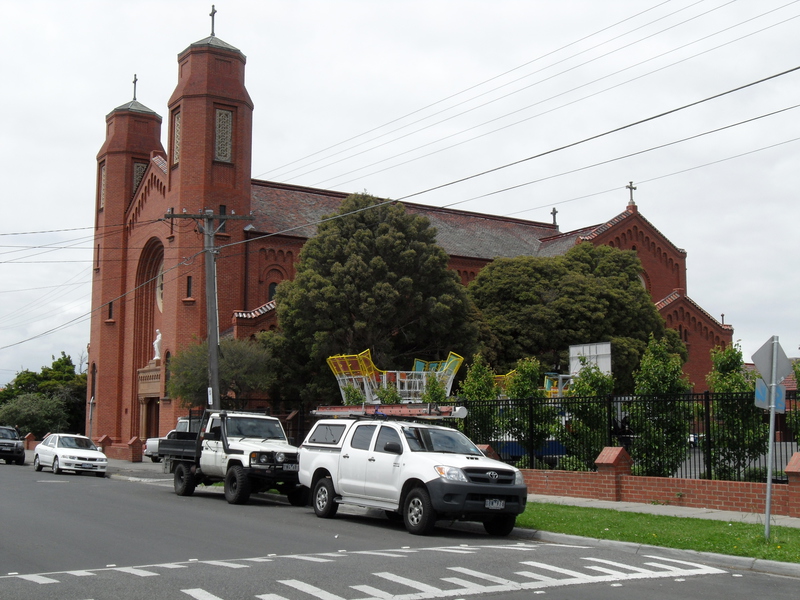 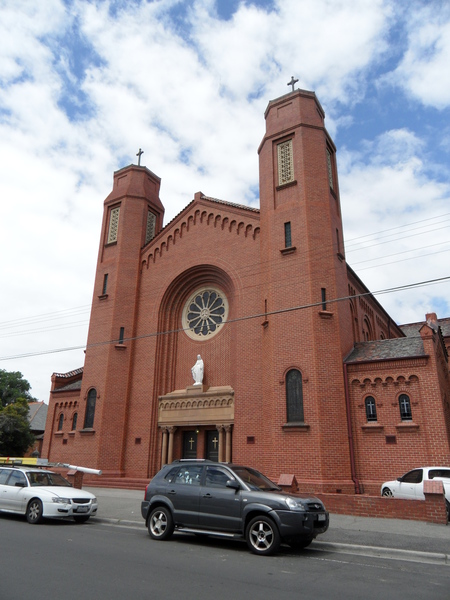 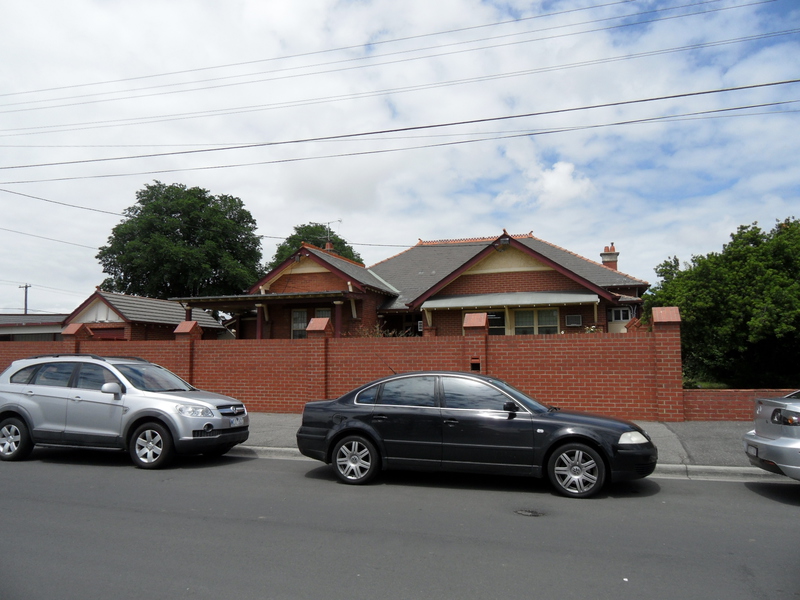 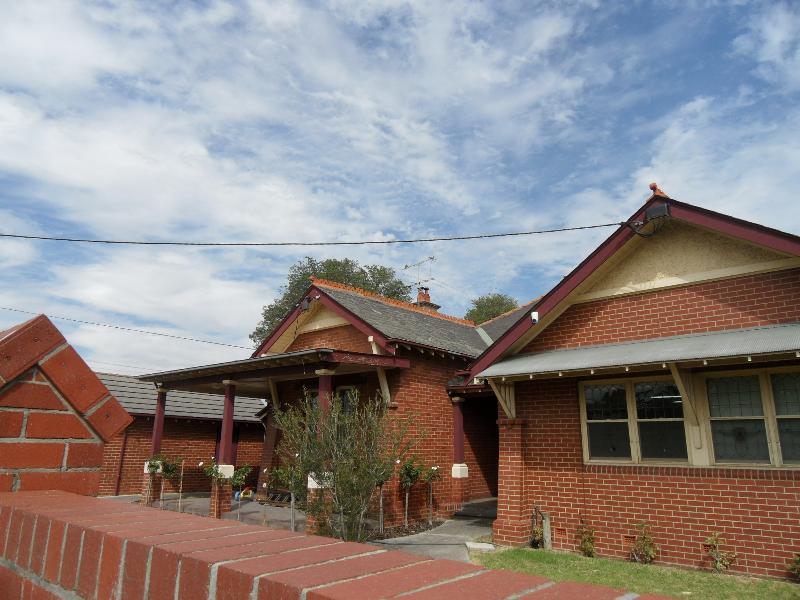 What is significant?
St Mary of the Immaculate Conception Church and its landscaping including the grotto, Presbytery and School at 123-125 St Leonards Road and 80 Roseberry Street, Ascot Vale, are significant. The monumental brick Church was built in two stages, in 1934 and 1938, to a Romanesque design by architect Patrick J O'Connor. Landscape elements around it, such as the grotto on its east side, were planned by Parish Priest Father Bakker to complement the new Church. The low brick fence along the north boundary also dates from the 1930s. The Presbytery was built in 1916 to a Federation Bungalow design by architect Patrick Connolly of Kempson and Connolly. Connolly was also the designer of the oldest building on the site: the 1913 School (and extended in kind in 1924) on Roseberry Street.

How is it significant?
The St Mary's complex is of local historical, architectural/aesthetic, social and associative significance to the City of Moonee Valley.

Why is it significant?
It is historically significant as a tangible illustration of the beginnings of the Ascot Vale Catholic Parish, founded in 1912, as evidenced by the survival of one of the original buildings: the School of 1913. It is also significant as an ambitious example of the Catholic Church's conscious decision to accelerate building programs during the 1930s depression as a form of social support by providing employment and business for many local tradesmen and suppliers. (Criterion A)

The Church is architecturally significant as a monumental and highly intact example of the Romanesque Revival applied in a relatively academic manner. It is distinguished by its high-quality materials and details, including the red brick walls with arcaded corbel tables and a decorative houndstooth pattern in the double-height archivolt above the entrance and in inset panels, and sandstone-coloured faience used for the entrance portico and tower screens. (Criteria D & E)

The grotto on the east side of the Church is aesthetically significant as a survivor of the beautification works put in place by Fr Bakker to provide an appropriate setting to the grand church. (Criterion E)

It has associative significance for the long association with architect William Patrick Connolly of practice Kempson & Connolly, who was the preferred parish designer under Father A May (1912-19). Connolly's designs during this time included an enlargement and remodelling of the 1895 timber church an existing house for the presbytery (both since replaced), the 1913 school on Roseberry Street, and the current 1916 Presbytery. Connolly, both in practice with CG Kempson and in private practice, was a prolific designer for the Catholic Church from the 1890s to the 1920s.

It also has associative significance as the life's work of Father H Bakker whose was the driving force behind the monumental Romanesque Revival church of 1934 & 1938 and associated beautification of the grounds, including grottos, statues and shrines. Fr Bakker made two study trips to Europe to get ideas for the new church, and then worked closely with his chosen architect, Patrick J O'Connor (another prolific designer for the Catholic Church), to bring his vision to fruition. (Criterion H)

It is socially significant as the centre of Catholic worship in Ascot Vale since 1895. (Criterion G)