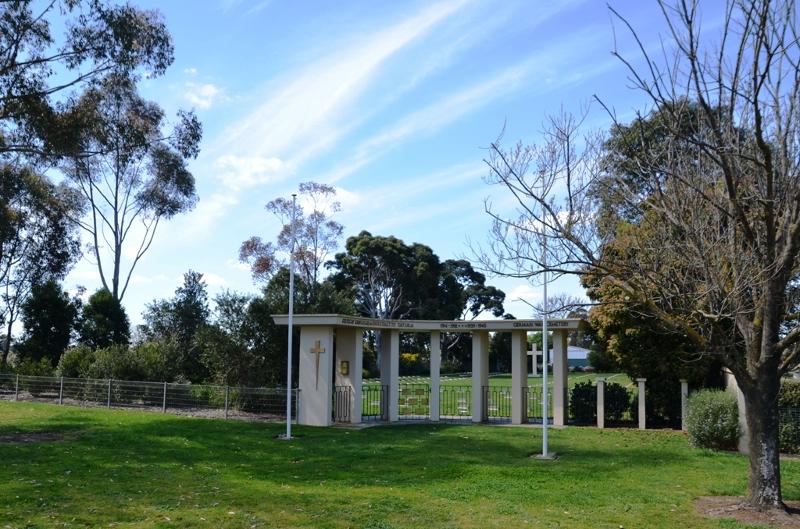 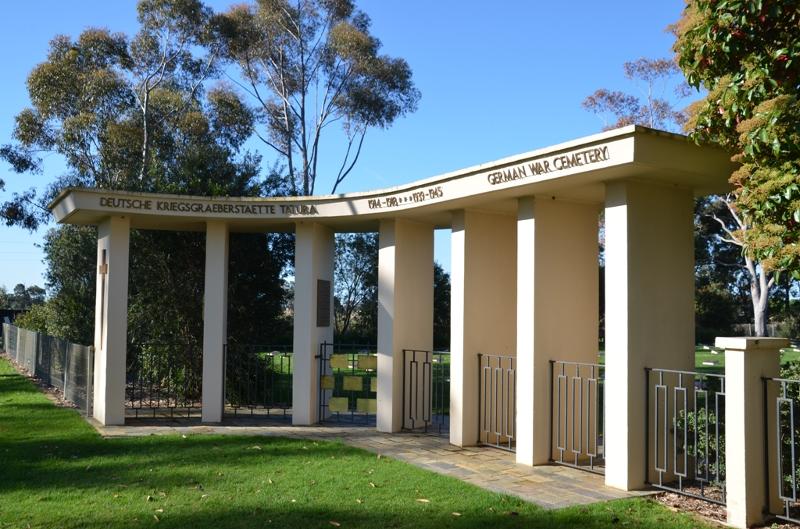 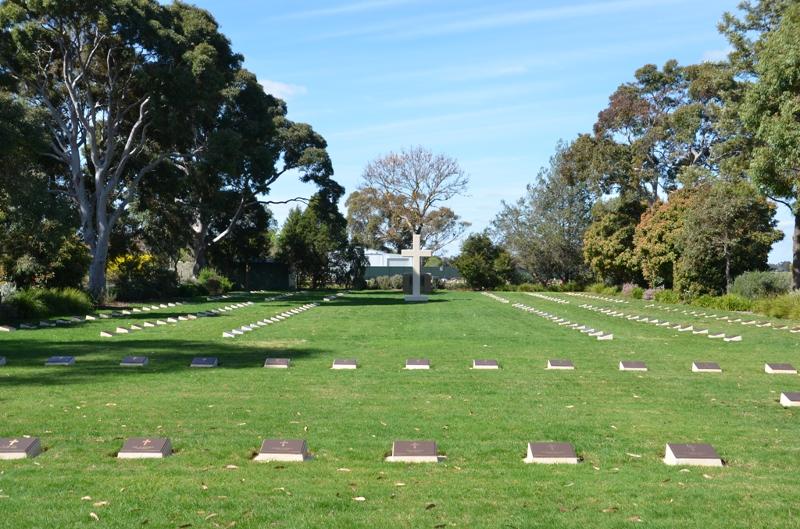 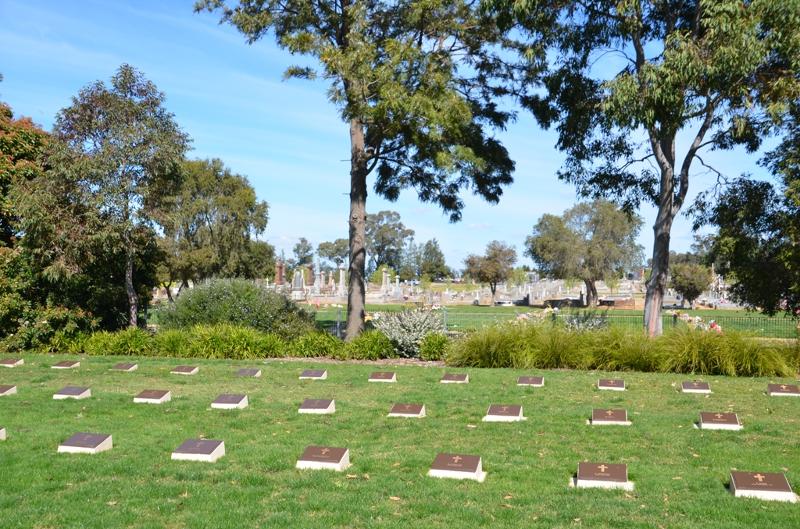 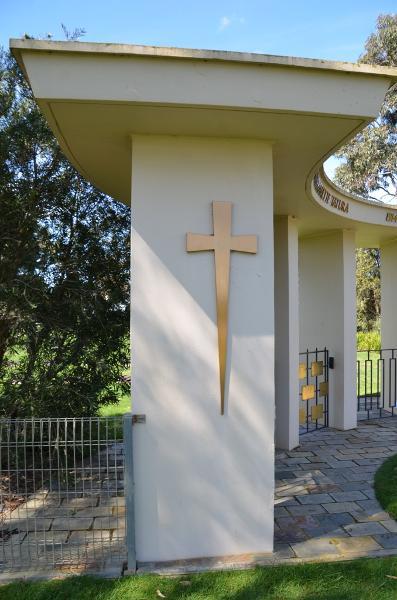 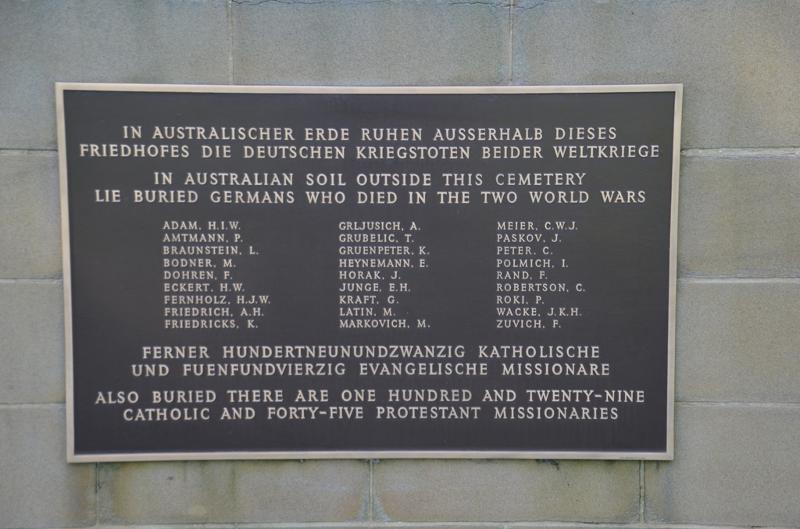 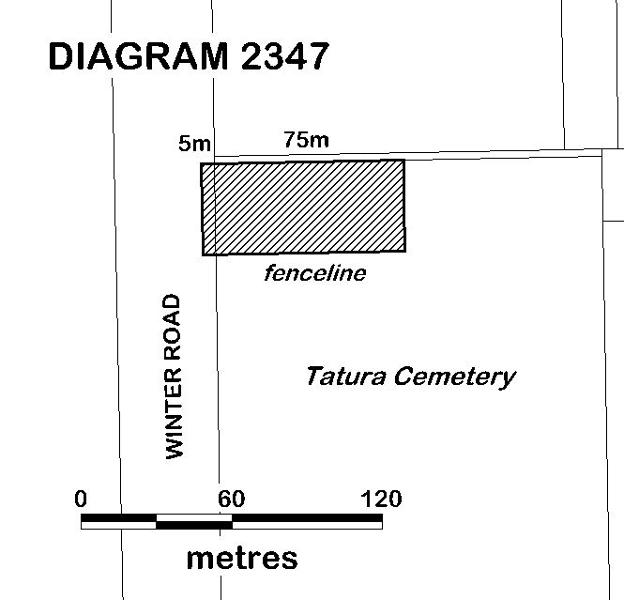 The German War Cemetery, Tatura consisting of a rectangular portion of land in the north-west corner of the Tatura Cemetery. It is a fenced area of lawn with headstones and plaques, a memorial, large concrete cross, entrance gateway and paving, and perimeter garden beds with mature trees. It includes a pair of flagpoles located outside the entrance gateway.

The German War Cemetery, Tatura was the first foreign war cemetery to be established in Australia by the Australian War Graves Commission. Established after World War II on land excised from the Tatura Cemetery, it provided for the reburial of German internees and Prisoners of War who died whilst detained in Australia during World War I and II. Bodies were exhumed from cemeteries throughout Australia and reinterred at this cemetery which is located in close proximity to the largest group of World War II internment camps constructed in Australia. These consisted of seven camps which housed more than 8,000 civilians and Prisoners of War largely from Germany, Italy and Japan. The first section of the German War Cemetery (on the western side) provided for World War II civilians and Prisoners of War and was opened in November 1958 by the West German Ambassador, Dr Hans Muhlenfeld, at a ceremony attended by some 1000 people. A second larger section (on the eastern side) was opened in 1961 for the reburial of German World War I internees. The German War Cemetery is one of five war cemeteries in Victoria established by the Australian War Graves Commission.

The German War Cemetery, Tatura is a small rectangular fenced lawn area located in the north-west corner of the Tatura Cemetery. It is a level area surrounded by trees and garden beds, and contains the graves of 191 World War I and 59 World War II internees, including 11 Prisoners of War. Headstones and plaques are arranged in rows around the perimeter, with the original World War II section located at the front and the World War I section located at the rear. Each grave is marked by a small masonry headstone with a bronze plaque and Iron Cross to identify Prisoners of War and a Latin Cross to identify civilians. In the centre of the lawn is a large concrete cross and a stone memorial with bronze plaque which records the names of 27 Germans who died in Australia in the two World Wars and remain buried elsewhere in Australia. It also commemorates 129 Catholic and 45 Protestant Missionaries who were buried elsewhere. Access to the site is through a rendered masonry gateway with seven rectangular columns supporting a flat-roofed canopy. The entry ground is paved with slate and a low wrought iron fence and gate with brass detail spans between each column. The entablature above bears the words 'Deutsche Kriegsgraeberstaette Tatura 1914-1918' and '1939-1945 German War Cemetery' in brass lettering. A pair of flagpoles is located adjacent to the gateway.

The German War Cemetery, Tatura is of historical and social significance to the State of Victoria. It satisfies the following criterion for inclusion in the Victorian Heritage Register:

The German War Cemetery, Tatura is significant at the state level for the following reasons:

The German War Cemetery, Tatura is historically significant as the first foreign war cemetery to be established in Australia and as one of five war cemeteries established by the Australian War Graves Commission in Victoria after the end of World War II. It remains highly intact from the early 1960s and demonstrates the relationship that developed between former enemy nations soon after the end of World War II. The headstones and plaques in the cemetery record the diversity of German internees and Prisoners of War who died in Australia as a result of World War I and II, including a sailor from the German ship Kormoran which sank the HMAS Sydney in 1941, and internees brought to Australia on the prison ship Dunera in 1940. [Criterion A]

The German War Cemetery, Tatura is socially significant for its longstanding relationship with the German community in Victoria. Since 1958 it has provided this community with a place for remembrance with official commemoration services held annually in November. [Criterion G]

The German War Cemetery, Tatura is also significant for the following reasons, but not at the state level:

The German War Cemetery, Tatura is of aesthetic significance at a local level for its picturesque character and evocative qualities. It is a peaceful and serene place which invites solemnity, commemoration and appreciation. The cemetery shares a close relationship with the large group of local World War II internment camps in the district.