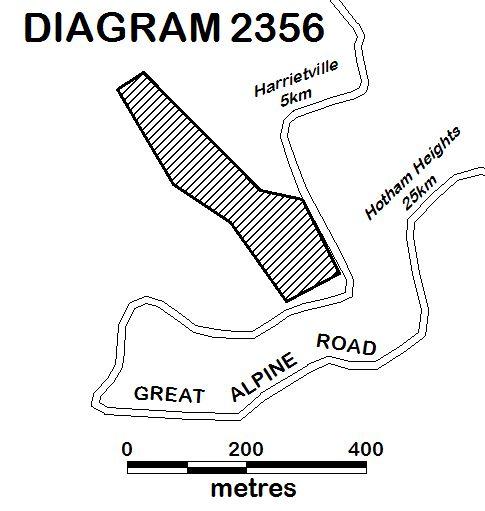 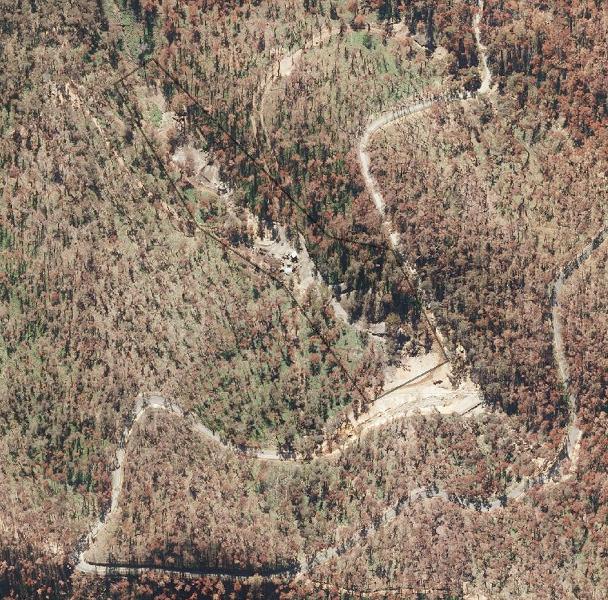 The Sambas Gold Mine including abandoned and working mining infrastructure and archaeological remains. Above ground infrastructure includes a battery shed and gold retrieval plant, and a stamping battery. Mining workings in the landscape include eleven adit levels (horizontal tunnels) and earthworks such as mullock heaps. Ruinous archaeological features include remnant machinery such as a benched platform, loading ramp, galvanised iron water tank, and parts of a collapsed and partially buried battery.

Harrietville is a rural township in north-east Victoria, midway between Bright and Mount Hotham. The first gold was discovered in the area in 1852 and by the late 1850s it became known as the Upper Ovens Goldfield. After the initial phase of alluvial mining in the rivers and creeks, the rich quartz reefs in the surrounding hills were soon discovered. The Sambas reef was struck in 1910 and the lease was taken up by local mining entrepreneur CF Proctor who installed the first stamp battery at the mine. The steep terrain of the Upper Ovens Goldfield meant that the quartz reefs at the Sambas Mine were worked almost exclusively by horizontal tunnels dug into the hillside (referred to as 'adits', a Cornish mining term) rather than the vertical shafts seen in the flatter gold mining landscapes around Bendigo and Ballarat. The Upper Ovens Goldfield was unusual because new and profitable quartz reefs continued to be discovered well into the twentieth century. During the 1950s, the Sambas Mine was by far Victoria's richest small gold mine. The mine is located on Crown Land and has been leased and worked almost continuously since 1910. A bushfire in 2013 damaged the 10-head battery installed in 1966. The battery was restored and mining continues to the present time at the No. 11 adit.

The Sambas Gold Mine is a a historically layered landscape of abandoned and working mining infrastructure formed over several decades. The mine elements include a battery shed and gold retrieval plant, comprising a stamping battery (manufactured by Thompson & Co. Castlemaine), three Butchart shaking tables and a floatation system. There is also an ore crushing plant including a fine ore bin, rod mill, disused rod mill, secondary crusher, primary crusher and air compressor tanks. Mining workings in the landscape include eleven adit levels, earthworks such as mullock heaps, tailings dumps and embankments. Ruinous archaeological features and remnant machinery includes a benched platform, loading ramp, galvinsed iron water tank and battery, known as the No.7 battery, which is partially buried. The extent is 3.17 hectares, the landscape is mountainous and the estimated terrain elevation is approximately 840 metres above sea level.

This place is on the traditional land of Waveroo. There is no Registered Aboriginal Party for this place.

The Sambas Gold Mine is of historical and archaeological significance to the State of Victoria. It satisfies the following criterion for inclusion in the Victorian Heritage Register:

Sambas Gold Mine is significant at the State level for the following reasons:

The Sambas Gold Mine is historically significant because of it is association with gold mining in Victoria and the particular adit mining techniques evident in the Upper Ovens Goldfield and other mountainous areas of Victoria. This relatively intact palimpsest of mine workings is a rare example of a once widespread form of small scale adit gold mining carried out in the mountainous regions of the state. It now is the oldest working mine of its type in Victoria. [Criterion A]

The Sambas Gold Mine is significant as a rare landscape of abandoned and working mining infrastructure which has formed over several decades relating to the particular practice of adit mining. It contains an uncommon assemblage of ore crushing machinery and gold retrieval technology, both redundant and in-use, that survives at the site including the stamping battery and rod mills. [Criterion B]

The Sambas Gold Mine is of archaeological significance for its likelihood to contain archaeological remains that relate to the construction and use of adit gold mines in Victoria. It has the potential to yield artefacts and evidence which will provide information about the cultural and technological history of adit gold mining, and the miners involved in this practice over the last hundred years. [Criterion C]

The Sambas Gold Mine is significant as the most representative, intact and continuing adit mine in Victoria. It is notable for its wide range of crushing and processing technology on display, such as a working stamp battery and rod mills. All elements of the mine are located in close proximity to each other on a small site allowing an understanding of the operations of a small adit mine, and the significance of the place to be readily observed and interpreted. The site demonstrates the practice of adaptive reuse of fabric over time, such as after the 2013 bushfire, and the practice of integrating mining machinery from other locations. [Criterion D]

Sambas Gold Mine is also significant for the following reasons, but not at the State level:

The Sambas Gold Mine is socially important as one of the most productive gold mines in the history of the Upper Ovens Goldfield region. It was one the most important reef mine employers for Harrietville and Alpine Shire residents from the 1930s to the early 1970s. It is an intermittent employer of miners to the present day forging strong connections within and across generations of Harrietville families.