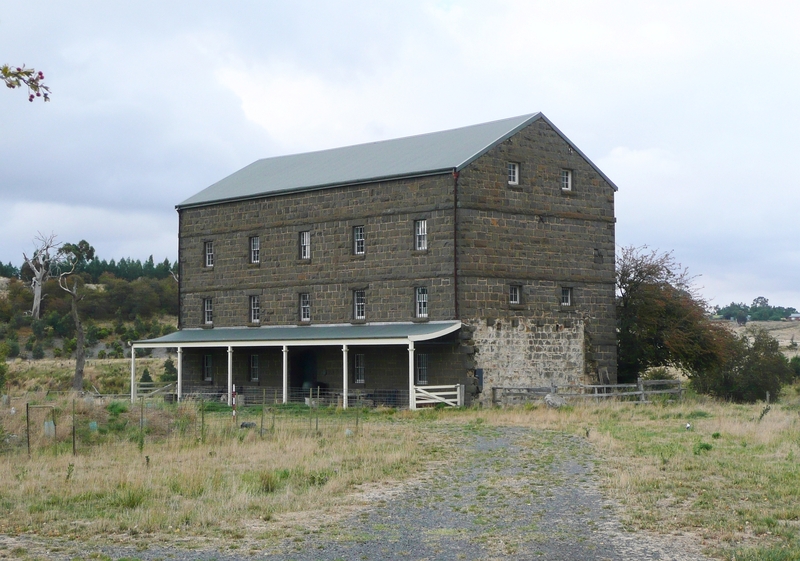 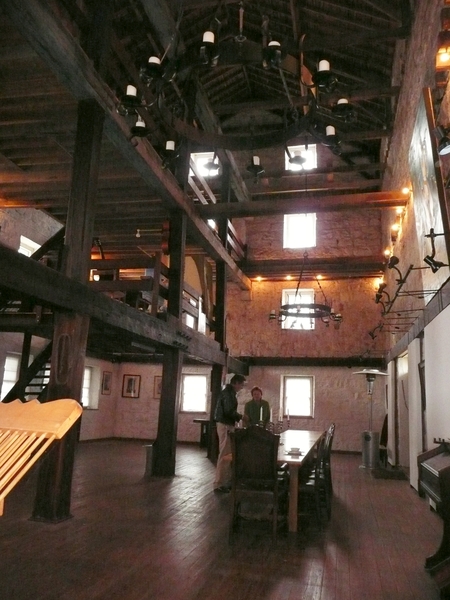 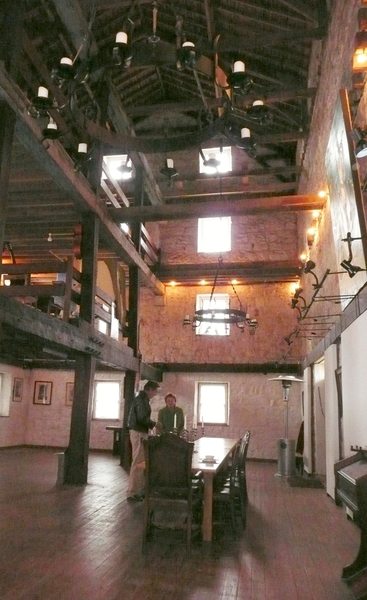 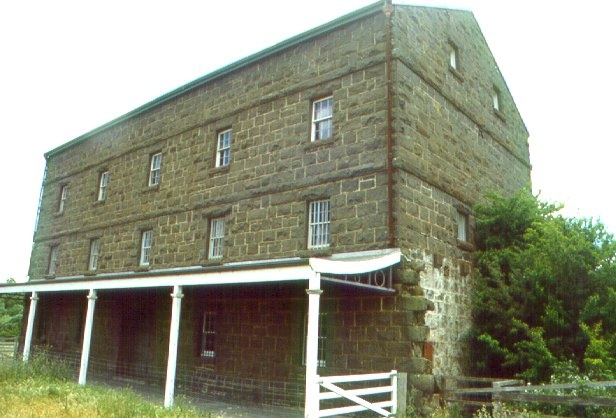 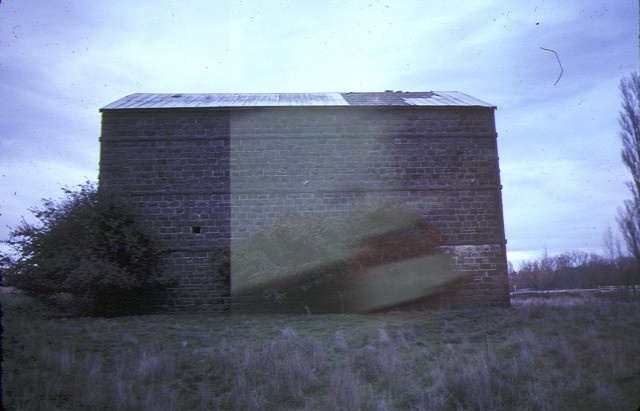 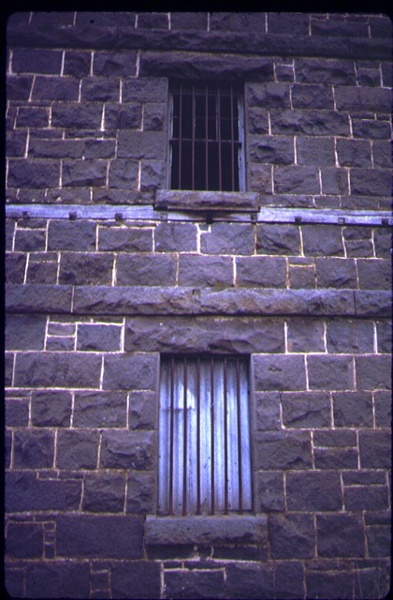 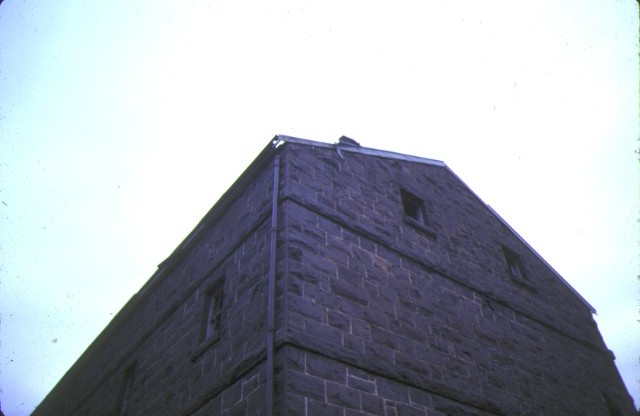 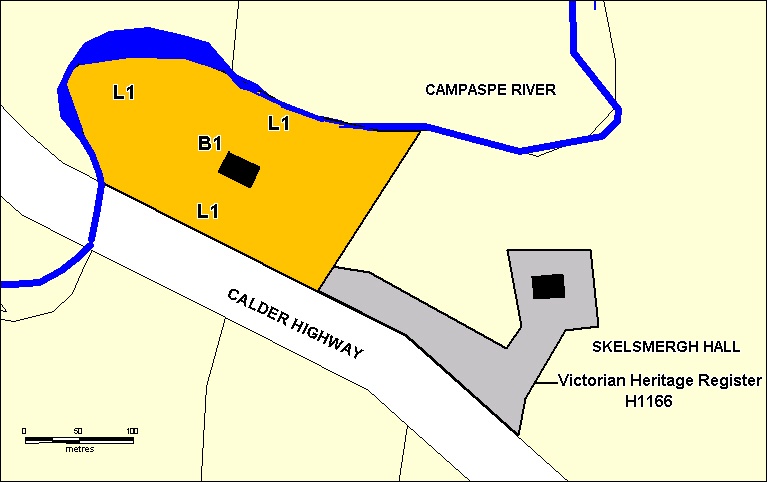 Degraves Mill stands beside the Campaspe River on the site of the head station of the Carlsruhe Run, established by Charles Ebden in May 1837. William Degraves acquired the run in the 1850s. Degraves was the son of Peter Degraves, who had migrated to Van Diemens Land in 1824 and later established the Cascade Brewery. William crossed over Bass Strait in 1849 and built his first steam flourmill in Flinders Lane in the early 1850s. He expanded into importing and exporting and wool.

Between 1840 and 1880 nearly three hundred flour mills were established in Victoria, the greater proportion of them being steam powered. Degraves had the mill built in 1857 to a design by FM White. In October 1856 White let tenders in local and Melbourne newspapers for the erection of a steam flourmill. Degraves also had a second mill built in the Kyneton district, at Riverview in 1859. The details of either mills machinery or capacity are not known.

Degraves Mill is a large bluestone structure, rectangular in plan, measuring about 20 metres by 10 metres. It has five main bays, defined by small multi-paned windows, and has a hipped roof. The coursed squared bluestone walls are relieved by only string courses, sills and window heads.

Internally the posts, beams and surviving joists are of Oregon. The original shingle roof is preserved beneath corrugated iron. The building is essentially a bluestone shell as all evidence of milling activity, including machinery, has disappeared. The mill ceased operating c1870. The adjoining engine room and chimneystack were demolished c1890.

The verandah is a recent conjectural reconstruction. Archaeological remains of a boiling down factory survive in an area close to the mill.

Degraves Mill is of historical, architectural, social and archaeological significance to the State of Victoria.

Degraves Mill is historically significant as a representative example of a large 1850s steam flour mill. Although the engine room and chimneystack and most of the internal flooring have been removed, Degraves Mill is a notable early industrial structure. The mill has a simple Georgian character, embodying typical elements of flour mill design, including solid bluestone construction with timber post and beam internal framing. It is significant as evidence of a technology and an important early local industry that is now lost.

Degraves Mill is architecturally significant as a large, imposing bluestone building in a rural setting. It stands alone and is in dramatic contrast to the typically smaller scale of pastoral and rural buildings of the region.

Degraves Mill is socially significant as a landmark on the Calder Highway, and is an important element contributing to the landscape of this area of the Campaspe River valley. It signifies the beginning of the township of Kyneton.

Degraves Mill is archaeologically significant for its potential to yield artefacts and other evidence relating to the location of boiling down factory, sited near the mill.