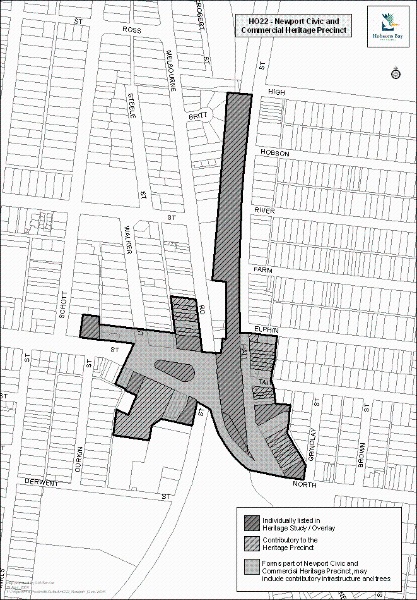 The Newport Civic and Commercial Precinct is of local historic, social and aesthetic significance to the City of Hobsons Bay.

Historically, it is significant as the major commercial centre within Newport locality which illustrates the nineteenth century beginnings of the area and the significant development that occurred in the Edwardian and Interwar period, which closely the residential and industrial growth of the area during the same periods and how development was closely linked to the development of the railways in this area. (AHC criteria A4 and G1)

Aesthetically, it is significant as a well preserved late nineteenth and early twentieth century commercial precinct that is notable for its architectural landmark sites including the former CBA bank, Newport Hotel, Masonic Hall, VR Newport DC substation and railway station and for the continuity and visual relationships of the shops in Hall Street and Melbourne Road, which are characterized by the parapeted building forms with uniform front and side setbacks, similar wall materials and similar scale and some with early shopfronts, awnings and other detailing. (AHC criteria E1 and F1)

Socially, it is significant for its strong associations with the Newport community as an important community meeting place that has played an important role in the development of the area. (AHC criterion G1)

On this basis, the following places and other elements contribute to the significance of the precinct:

- Bluestone kerb and channeling and laneways.