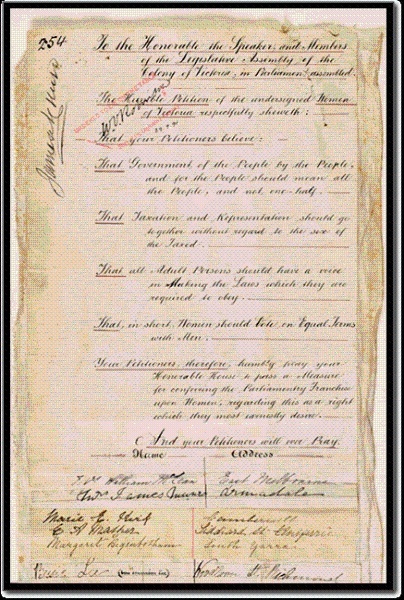 The first women's suffrage society had been founded in 1884 by three Victorian women, Henrietta Dugdale, Annie Lowe and Vida Goldstein. The Women's Christian Temperance Union, established in Melbourne from the United States in 1887, was an influential organisation run for and by women and was involved in many social reform campaigns, as well as temperance, including, most notably, the vote for women. The temperance organisations realised that if women had the vote they could influence social policy and legislation.

The petition of 1891 demonstrated that women were becoming politically active and could no longer be ignored as a political force. In the 1890s, women's suffrage Bills came regularly before Parliament but were blocked by the Legislative Council and it was not until 1908 that Victorian women were able to vote in state elections. Victoria's decision to grant women votes was preceded by New Zealand (1893), South Australia (1894) and Western Australia (1899) while the Federal Parliament passed the Commonwealth Franchise Act of 1902 enabling Australian women to vote at a federal level, as they did in the first federally organized election in 1903. Australia became the second country in the world to give women adult suffrage.

The original Women's Suffrage Petition 1891 listing nearly 30,000 signatures, is approximately 260 metres long and 200mm wide and is made of paper pasted to cotton or linen fabric backing, rolled onto a cardboard spindle which rests on a Perspex stand. The signatures and other details on the petition have been digitally transcribed and developed into a searchable database. They are available on both the Parliament of Victoria and Public Record Office Victoria websites.

The Women's Suffrage Petition 1891 is of historical and social significance to the State of Victoria.

The Women's Suffrage Petition 1891 is of historical significance in the history of the women's suffrage movement in Victoria.

Women's Suffrage Petition 1891 is of historical significance for its associations with the history of women's organizations in Victoria. It demonstrates the cooperation of the various women's organisations in their determination to gain women's rights.

The Women's Suffrage Petition 1891 is of historical significance as a rare historical record of nearly 30,000 Victorian women's commitment to their rights, in that women's political views were seldom recorded.

Brilliant app! Any chance of linking through to http://amw.org.au/content/australian-register