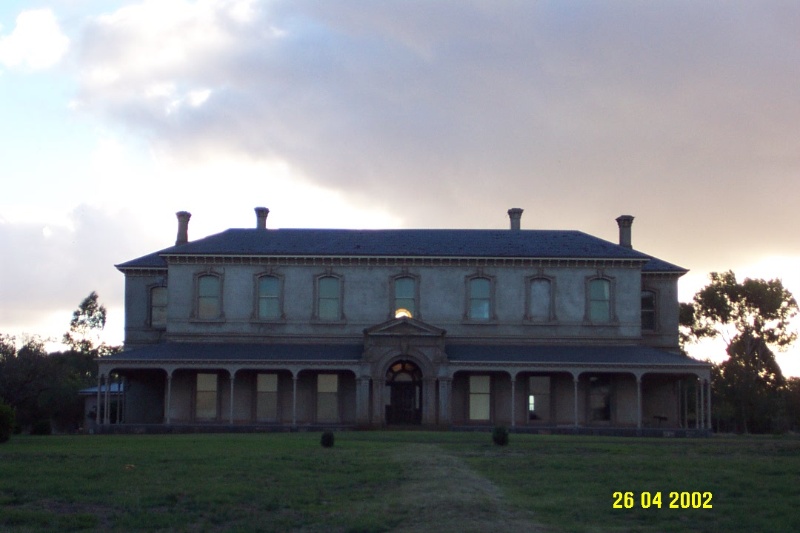 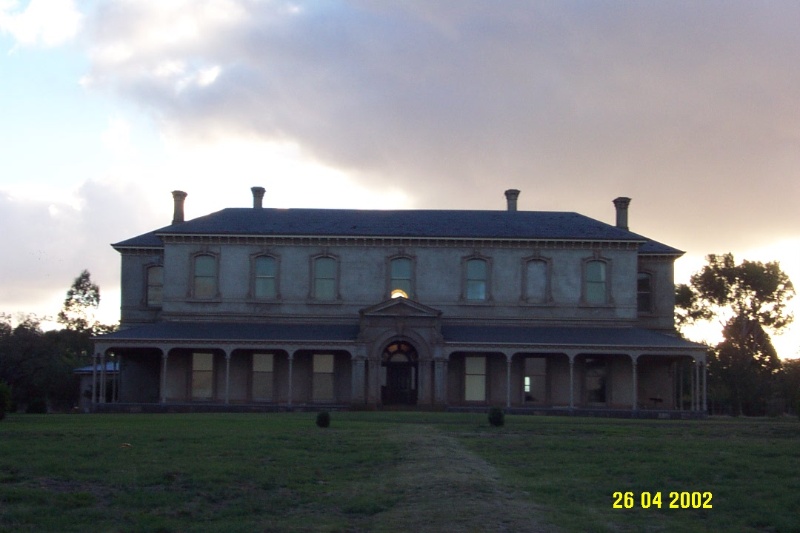 What is significant?
The Gums Homestead Complex is located 12 kilometres east of Penshurst, on the Woolsthorpe Road. There are two surviving homesteads dating from 1852 and 1876, and the potential archaeological remnants of the original homestead, dating from as early as 1839. The 1852 homestead (known as the Gottereaux homestead) was built for Henry Gottereaux, a retired Imperial Army Officer, to replace the 1839 slab homestead. It is a small, symmetrical, single storey weatherboard house (said to be pre-fabricated) with a timber verandah across its facade, and bay windows located either side of the front door. The house has been extended several times over the years but some extensions have since been demolished. The roof is now clad with corrugated iron, which replaced earlier Morewood and Rogers galvanised iron roof tiles. A mature nineteenth century garden including a substantial Canary Island Pine (Pinus caneriensis) survives around this homestead. Low stonewalls designed to stop floods from Muston's Creek surround the garden. The site also has separate bluestone structures at the rear of the Gottereaux homestead; workmen's cottages and stables also exist to the north.

Some 800 metres southwest lies the later homestead, built in 1875 for William Ross, to express his increasing prosperity and to house his large family. Joseph Reed, of prominent Melbourne Architectural firm, Reed & Barnes, designed the building. The homestead is a symmetrical, two storey rendered building with a single storey timber verandah on three sides. A single storey portico marks the entrance. The house is in a severely restrained Classical revival or Italianate style, which has been linked with the palazzo and villa forms. The internal planning and detailing of the house is grand but conventional with its central hall, the main staircase, which divides at the landing, and the principal rooms on either side. There are bedrooms on the first floor, the two above the drawing room requiring a blind window in the facade to accommodate the wall between them. At the rear there is a large courtyard, surrounded by a verandah with services accommodated in the single storey wings and a covered water tank in one corner The service wing is unusual in its use of narrow stones as well as larger stones. The homestead is set in the remains of a very substantial and complex garden. Many of the trees within the garden have been recently removed, as have many of the original plantings of shrubs and hedging, although the basic layout of the garden survives. The majority of the trees, which date from, the original 1875 design are in very good condition. The garden also has what remains of a substantial and unusual collection of conifers, many of which may have been supplied by Government Botanist and Director of Melbourne Botanic Gardens, Baron Ferdinand Von Mueller. Bluestone stables are located some distance from thee rear of the house. The bluestone in the stables has been laid in a similar manner to the service wing of the main house, which uses distinctive narrow stones as well as large stones.

How is it significant?
The Gums homestead complex is of historical, architectural and aesthetic significance to the State of Victoria and to the Southern Grampians Shire.

Why is it significant?
The Gums Homestead Complex is of historical significance as one of the earliest pastoral properties and for its association with William Ross, an important pastoralist, who was a member of the Legislative Council and a leading member of the Presbyterian Church. The Ross family and their descendants have maintained continual ownership of the property since William Ross purchased it in 1864. The complex is also important historically when the three homesteads are viewed together. Together, they reflect the growing success of pastoralism in the differing styles and sizes of the three structures. The complex is also historically important as it represents a social change in status with the building of the last homestead. The garden is interesting historically as it represents a wide variety of plants which were commercially available in the latter part of the nineteenth century, and displays complex elements of axial design which were traditionally associated with public buildings and gardens. Of further interest is the possible sourcing of plant material from Baron Ferdinand Von Mueller, the Government Botanist and Director of the Melbourne Botanic Gardens. Ross is said to have had a keen correspondence with Baron Von Mueller, who may have supplied the unusually diverse range of native and exotic conifers, which appear in the garden layout from earliest times.

The complex is of architectural significance for its association with Joseph Reed, and possibly Edward La Trobe Bateman, who may have designed the garden. It is an excellent example of the severely restrained Classical revival or Italianate style, which has been linked with the palazzo and villa forms. Its conservative formal architecture can be contrasted with the highly picturesque architecture of Kolor Homestead nearby.
Show more
Show less
All information on this page is maintained by Southern Grampians Shire. Click below for their website and contact details.

When visiting my 2nd cousin, Rosemary Agar, n&eacute;e Ross as a child, I remember the &ldquo;automatic&rdquo; gates. They had a ramp board attached to the gate with a pulley, so when a car (or buggy) approached, the front wheel could mount the ramp board forcing it down, thus using the pulley rope to open the gate, giving the vehicle time to drive through before the gate swung shut. We used to try and get our horses to put their front feet on the ramp board, with limited success.

There was a small golf course at the bottom of the garden where my father learnt to play as a child when visiting his Ross cousins. I also learnt to ride there on early visits.