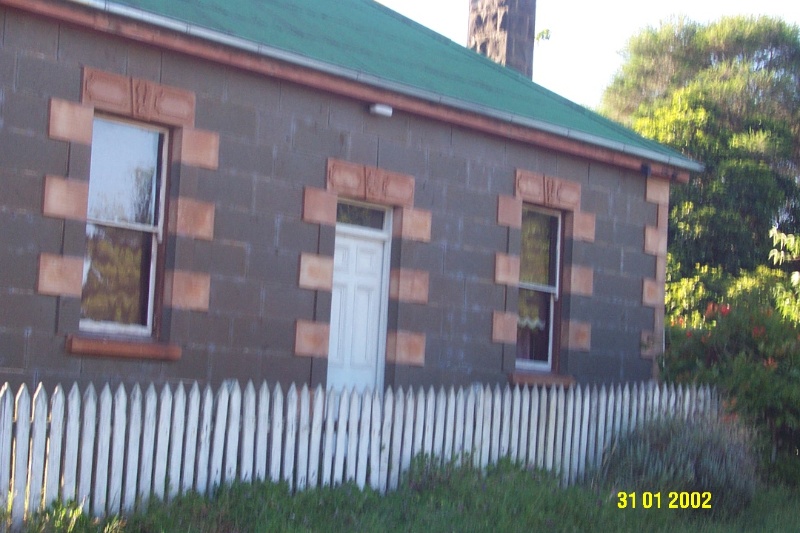 What is significant?
William Howarth's house is located at the southern end of Monroe Street, Branxholme. William Howarth J.P. was born in Lancashire, England, arrived in Sydney, then came to Branxholme in the late 1850s where he was a storekeeper. He was the magistrate in Branxholme between 1874 and 1903. He was also one of the trustees of the Mutual Improvement Association which built the local Mechanics Institute in 1883. Howarth purchased the land in 1858 and built a simple vernacular building towards the rear and on one side. This survives, little altered and in fair condition although with some structural failure. In 1861, he opened a shop called the 'New Store' and acted as a banker as well as supplying a variety of goods. He must have prospered because he had the stone house built in front of his first residence in 1865. The quality of the detailing and workmanship, suggest that the house was designed by the leading Hamilton architect, Charles Henry Fox. The facade is particularly distinguished for its combination of bluestone ashlar and Grampians freestone quoins and lintels. The latter are very finely dressed and carved with unusual iconography. The second house retains an excellent degree of integrity and is in good condition. The juxtaposition of two dwellings in an urban context is rare. The short sheeted corrugated iron surviving on the main roof is also rare.

How is it significant?
The William Howarth House, Branxholme is of historical, social and architectural significance for the Southern Grampians Shire and the State of Victoria.

Why is it significant?
The William Howarth House, is of historical significance for its link with the successful British immigrant William Howarth, who came to Australia during to Gold Rush period and became a modestly successful storekeeper. It is of social significance as a reflection of his life as an important citizen in a small township. The complex of two dwellings is of architectural significance for its juxtaposition of the two dwellings, the distinguished design and excellent construction of the second dwelling and for its probable connection with the important architect, Charles Henry Fox.
Show more
Show less
All information on this page is maintained by Southern Grampians Shire. Click below for their website and contact details.