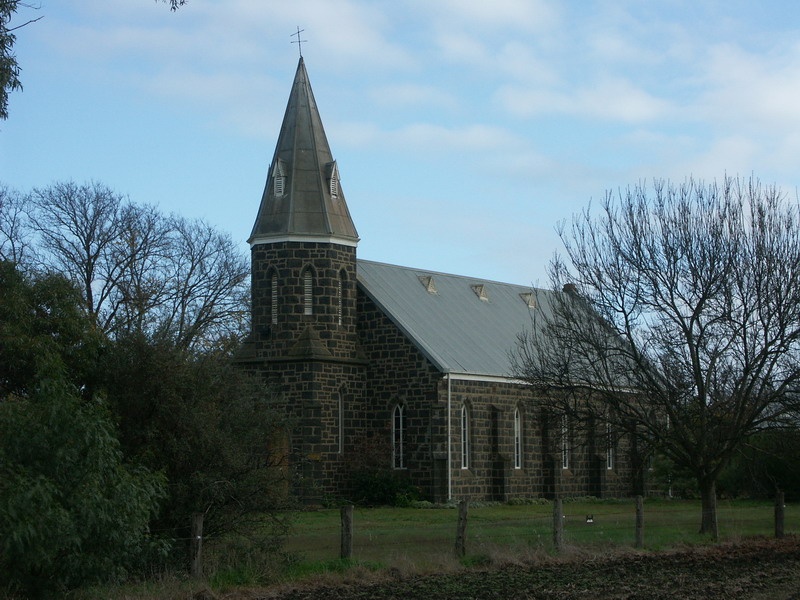 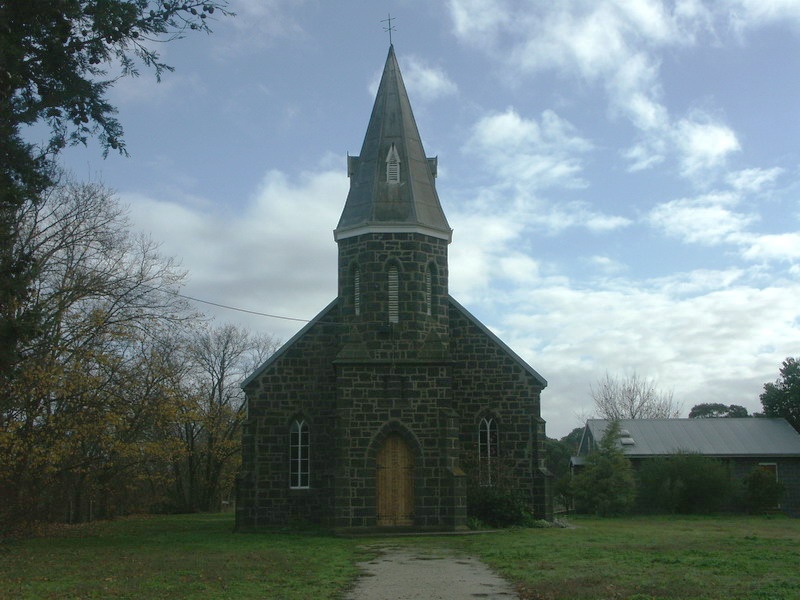 The Leigh Presbyterian Church, 1716 Bannockburn-Shelford Road, Shelford, has significance as a tangible legacy of the development and life of the Presbyterian Church in the Leigh district since the mid 19th century, and as a predominantly intact example of a Victorian Early English Gothic style, the tower and steeple being a landmark in the town. Built in 1859 to a design by the Geelong architect, Joseph Lowe Shaw, the establishment of the church was the culmination of a collective effort by a number of wealthy pastoralists in the district, notably George Russell of Golf Hill, James Kinninmont, Alexander Armstrong of Warrambeen, the Russells of Barunah Plains, R.L. Bell, of Mt. Mercer, John and James Bell and H.M. Wilson, of Shelford. Significant fabric includes the steeply-pitched gabled and parapeted roof form, coursed random rubble bluestone wall construction, five-bayed composition defined by the projecting buttresses and two-lighted pointed-arched windows, rear Italian-pointed openings and particularly the landmark tower having a square base surmounted by an octagonal belfry and steeple. Projecting from the steeple are four ventilation gablets. The church is accessed by a central pointed-arched door opening with vertically-boarded timber doors into an entrance porch with a timber-lined ceiling. Internally, the virtues of 19th century Presbyterian austerity are also reflected in the unornamented windows (apart from the Christian Waller-designed stained glass memorial window to Captain John Biddlecombe, introduced in 1931), plain hard plastered walls, timber floor and central aisle flanked by timber pews. Decorative effect is largely confined to the slender timber ceiling trusses and the several marble, brass and bronze memorial tablets and plaques affixed to the walls.

The Leigh Presbyterian Church, Shelford, is architecturally, historically and socially significant at a local level.

The Leigh Presbyterian Church, Shelford, is historically significant (Practice Note Criteria A & H) for its associations with the development and witness of the Presbyterian Church in the Leigh Charge since its construction in 1859. The Leigh Presbyterian Church also has important associations with key figures in the evolution of the church, including the Rev. Archibald Simpson (first incumbent), and prominent pastoralists and businessmen of the district, including George Russell of Golf Hill, James Kinninmont, Alexander Armstrong, of Warrambeen, the Russells of Barunah Plains, R.L. Bell, of Mt. Mercer, John and James Bell and H.M. Wilson, of Shelford. The church is also associated with the Geelong architect, Joseph Lowe Shaw, and it represents one of his earliest Presbyterian Church designs. The stained glass memorial window to Captain John Biddlecombe of Golf Hill, and donated in 1931 by his wife, Janet Biddlecombe, (nee Russell) is the work of one of Australia's leading early 20th century stained glass artists, Christian Waller.

The Leigh Presbyterian Church, Shelford, is architecturally significant (Practice Note Criteria D & E) as one of the earliest and contextually substantial examples of Presbyterian Church building in the Shire. It is also a predominantly intact and notable example of the Victorian Early English Gothic style. The squat square tower with octagonal belfry and steeple is a local landmark in the town. The rudimentary interior has importance as a physical legacy of 19th century Presbyterian austerity, and while the original pulpit and canopy have been removed, the original character survives in the ceiling, wall and window fabric, and in the central aisle flanked by the timber pews. Although introduced, the stained glass memorial window depicting the patron saints of the sea, Ss. Andrew and Nicholas, also contributes to the aesthetic significance of the church.

The Leigh Presbyterian Church, Shelford, is socially significant (Practice Note Criterion G) as it is recognised and valued by sections of the local community for religious reasons, as a symbol of their faith and their history of local participation in faith education. The church interior includes a number of memorials to former members of the congregation. These memorials therefore have commemorative value.