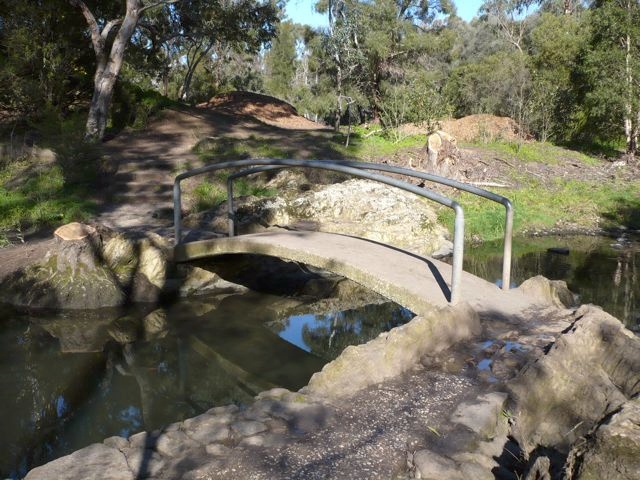 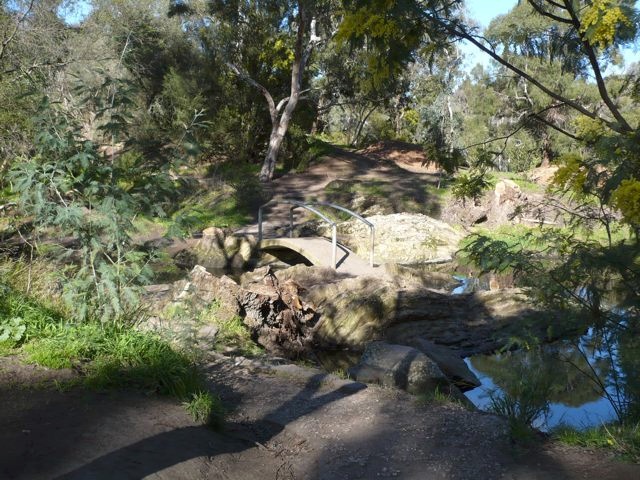 What is significant?
The Clifton Bridge is an example of the dedication and hard work of local volunteers from both sides of the Darebin Creek. Before the bridge was built in 1979, the volunteers from the east side, including school students, had to wade across the creek to work on the Alphington side of the Park. The bridge was designed by Sidney Clifton, a senior lecturer in Mechanical Engineering at the University of Melbourne. The rather unusual concrete design was approved by the Melbourne & Metropolitan Board of Works before construction of the bridge commenced. Heidelberg and Northcote Councils shared the cost of the materials. Members of the Darebin Parklands Association assisted Clifton with the construction of the wooden formwork at his home. The formwork was put in place across the creek on a winter's afternoon in 1979, and, as it was getting dark, the concrete was poured by the light of kerosene lamps and torches. Hundreds of people came to the opening of the bridge. The ribbon was cut by the Federal Minister Brian Howe on behalf of the Darebin side, and Bruce Skeggs, the Member for Ivanhoe for the Banyule community. The bridge was the only footbridge along the Darebin Creek between the Darebin Parklands and Northland Shopping Centre, until two wooden bridges were built as part of rehabilitation works along the creek.

The bridge as constructed in 1979 and its natural setting is significant.

How is it significant?
The Clifton Bridge in Darebin Parklands is of local historic and social significance to Darebin City.

Why is it significant?
Historically, the Clifton Bridge is significant as a place that has important associations with the work of volunteer groups to rehabilitate the Darebin Creek and its environs in the latter part of the twentieth century. It is significant for its associations with the Darebin Parklands Association, a group that has played an important role in improving the environment of the Darebin Creek and its environs. The Clifton Bridge is socially significant as a place that has important symbolic and cultural associations as astructure that was built as a result of community initiative and with community involvement in its planning and construction. (AHC criteria A.4, G.1, H.1)