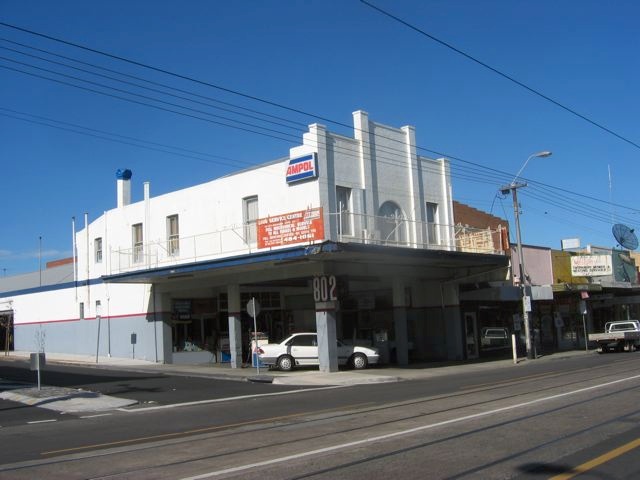 What is significant?
The phenomenal growth in car ownership in the inter-war period led to the proliferation of motor garages or services stations as they were later known throughout Victoria. Concerns about the safety of early kerbside petrol pumps led to the development by the late 1920s of 'drive-in' service stations, often on corner sites. The exact date of the drive-in service station at 802, High Street Thornbury is not known, but there has been a motor garage on this site since 1920. It is a two-storey Inter-war brick shop/commercial building that incorporates a 'drive-in' service station on the ground floor. The ground floor elevation of the service station retains early metal-framed windows (some with early painted advertising for 'BF Goodrich') and other detailing including tiling (now painted)and part of the original pressed metal underside of the awning survives on the Pender Street elevation. The rear of the garage containing the motor workshop is single-storey and extends along the Pender Street boundary. The upper level of the building has the ubiquitous stepped parapet commonly seen on early twentieth century buildings in High Street. In the centre bay there is a large arched window, which has been altered. The brickwork on the building has been painted.

How is it significant?
The drive in service station at 802 High Street, Thornbury is of local historic and architectural significance to Darebin City.

Why is it significant?
Historically, the drive in service station at 802 High Street, Thornbury as a building that is associated with the phenomenal growth in motor car ownership and the development of associated facilities during the inter-war period. It is architecturally significant as a good representative example of an inter-war drive-in service station on a corner site. The significance of the place is enhanced by its relatively high degree of intactness, its continuing use as a service station, and its rarity value as the only surviving example of this type of service station within Darebin. (AHC criteria A.4, B.2, D.2)

I remember my father used to get his car serviced there in the mid 60's. It was run at that time by the Teunon brothers who I believe my father knew from his childhood. I can remember I loved the smell of the oil which had soaked into the old floorboards.