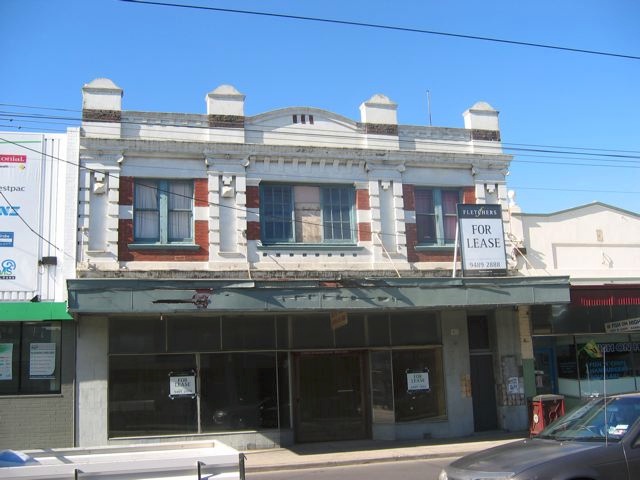 What is significant?
This building at 846 High Street, Thornbury, a two-storey, inter-war brick shop designed in a Free Classical-style and erected in 1921 at a time when the High Street shopping centre was establishing itself as a major retail strip in the northern suburbs, is significant. The facade of the first floor has Classically-inspired rendered elements including pilasters that have Ionic-inspired capitals, and a relatively deep cornice. The facade is divided into three bays. The central bay has a group of three windows, but one has had its multi-paned sashes removed and a board, or similar, has been fitted. Flanking this central bay are bays that have pairs of multi-paned double-hung sash windows, which are surrounded by face brickwork with a rendered band.

Later alterations and/or additions, including the ground floor shopfront and the cantilevered awning are not significant.

How is it significant?
The shop at 846 High Street, Thornbury is of local historic and architectural significance to Darebin City.

Why is it significant?
Historically, the shop is significant as an example of the scale of retail premises erected in Thornbury in the years immediately after World War I when it established itself as a major retail strip in Darebin. The shop is also significant historically because of its long association with the Davis family who worked as pharmacists in the district for much of the twentieth century, and who were also active members of the local community. (AHC criteria A.4, D.2, H.1)

The shop is architecturally significant as a representative example of retail premises designed in a Free Classical-style. (AHC criterion D.2)