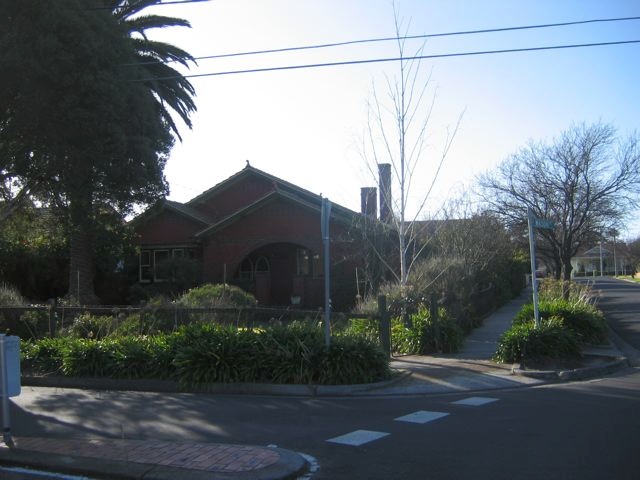 What is significant?
The bungalow at 34 Mason Street, Reservoir, constructed c.1931 for James Paterson, a motor garage proprietor, and his wife Emmaline, is significant. It is a well-detailed single-storey brick bungalow which has three gable roofs clad in terracotta tiles. A large roof spans most of the building, with two smaller roofs covering a projecting bay at front and the front verandah. The verandah has a large brick arch with well-detailed voussoirs of brick. The front doors lead off the verandah. They are a pair of timber frame doors, each with elliptical-shaped glazing. The house's walls are red brick, with banding and other details in a deeper coloured brick. Windows are timber frame double-hung sashes. The house is in good condition and has a high degree of external integrity. The woven wire front fence fence, garden setting and the mature Canary Island Palm (Phoenix canariensis) also contribute to the significance of the place.

How is it significant?
The bungalow at 34 Mason Street, Reservoir is of local historic and aesthetic significance to Darebin City.

Why is it significant?
Historically, the house is significant as it provides evidence of an important phase of suburban development in Reservoir during the Inter-war years. Its significance is enhanced by its rarity value as one of a small number of relatively intact and well-detailed bungalows from this period within the suburb. (AHC criteria A.4, B.2, D.2)

Aesthetically, the house is significant as a relatively intact example of a bungalow with architectural embellishment that is well detailed and other elements that are typical of this style. The aesthetic qualities of the house are enhanced by the mature garden setting, which includes a mature Canary Island palm and an early woven wire fence. (AHC criterion D.2, F.1)