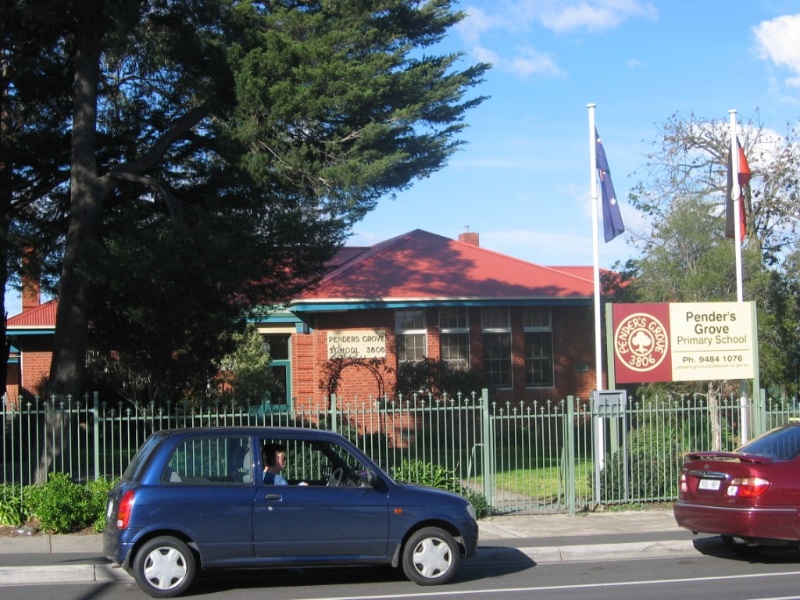 What is significant?
Penders Grove Primary School No. 3806 at 370 Victoria Road, Thornbury is a single storey 1920s school of typical design. Opened in 1925 it was the third primary school to be built in Thornbury and catered for the massive growth in enrolments in the wake of the population boom in Darebin during the 1920s. The following elements contribute to the significance of the place:

- The 1924-5 school building to the extent of the original external materials, form and detailing.
- The mature trees within the school grounds, including Oaks (Quercus sp.) along the south boundary near the frontage, Cypresses (Cupressus sp.) along the frontage boundary, and Pepper trees (Schinus molle) near the northern side boundary.

Later additions to the original school, other buildings, boundary fences and other non-original/early fabric are not significant.

How is it significant?
Penders Grove Primary School No. 3806 is of local historic, architectural, aesthetic and social significance to Darebin City.

Why is it significant?
Historically, Penders Grove Primary School No. 3806 is significant as a school associated with the significant growth in Darebin during the inter-war period. It is historically significant for its use during the late 1940s as a Boys Post Primary School connected to the Preston Technical School, which was the first of its kind in Victoria. It is one of a number of 1920s schools in Darebin that illustrate the evolution in school design under the direction of E. Evan Smith, Chief architect of the PWD from 1922 to 1929. The mature plantings in the school yard provide evidence of Arbor Day, an important event in the lives of school children in the early twentieth century. (AHC criteria A.4, D.2, H.1)

Penders Grove Primary School No. 3806 is architecturally significant as a representative example of a single storey 1920s school, which illustrates the transition in school design toward the Classical style under E. Evan Smith. The aesthetic qualities of the school are enhanced by the now mature trees. (AHC criteria D.2 & E.1)

Socially, Penders Grove Primary School No. 3806 is significant as an educational facility that has been known, used and valued by the Thornbury community for over 80 years. (AHC criterion G.1)