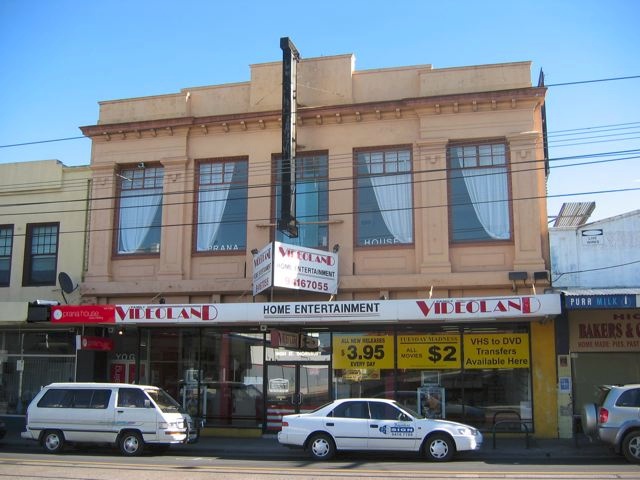 What is significant?
The building at 885 High Street, Thornbury is a two-storey rendered brick inter-war former furniture showroom on the west side of High Street, Thornbury directly opposite Pender Street. It was erected by 1926, at a time when the High Street shopping centre was establishing itself as one of the major retail strips in the northern suburbs. The shop was for many years the premises of the furniture retailer, Andersons, who at one time had five stores across Melbourne.

The facade of the first floor, which is relatively intact, is significant. It is divided into three bays. The central bay has large windows with multi-paned glazing at their heads, andis flanked by end bays that project slightly, each containing a similar window in terms of scale, proportion and embellishment. The end bays are formed by Classical-inspired pilasters. A cornice extends across the facade above the windows and a stepped parapet forms the top of the building.

Later alterations and/or additions, including the ground floor shopfront, the cantilevered awning and the electrical illuminated signage fitted to the first floor facade are not significant.

How is it significant?
The former Anderson's Store at 885 High Street, Thornbury is of local historic, architecturaland aesthetic significance to Darebin City.

Why is it significant?
Historically, the former Anderson's Store is significant as a representative example of a major furniture retailer's premises that illustrates the significant phase of High Street in the 1920s when it became one of the most important shopping centres in the northern suburbs of Melbourne. It is historically significant for its long associations with Andersons, an important retailer in the mid twentieth century (AHC criteria A.4, D.2, H.1).

The former Anderson's Store is architecturally significant as a representative example of an inter-war furniture retail premises designed in a Free Classical-style. It has aesthetic signfiicance as a landmark building within the High Street, Thornbury retail precinct. (AHC criterion D.2)