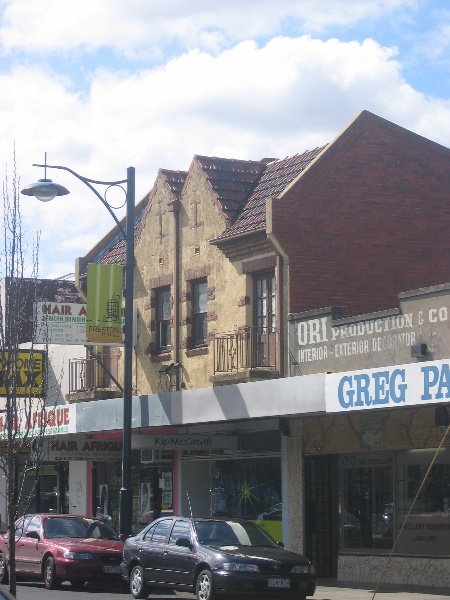 What is significant?
The pair of shops and residences at 306-08 High Street, Preston constructed in 1929-30 for Mr Arthur Sandland, a local businessman who owned a poultry farm in Preston. The following elements contribute to the significance of the place:

- the upper level of the building, including the facade and parapet walls; and
- the shopfront at No.306
- the rear section of the building dating from 1929-30.

Later alterations and additions, including the shopfront at No.308, are not significant.

How is it significant?
The pair of shops and residences at 306-08 High Street, Preston is of local historic and aesthetic significance to Darebin City.

Why is it significant?
Historically, it is significant as evidence of the commercial development associated with the post First World War boom when the population of Preston trebled within a decade. It illustrates the significant development that led to Preston being proclaimed a city by 1926 and cemented the role of this part of High Street as the civic and commercial heart of Preston. It is of interest for its association with local businessman Arthur Sandland (AHC criteria A.4, D.2, H.1).

Aesthetically, it is significant as an interwar commercial building of individual design. The building is notable for the upper facade, which is relatively intact and includes unusual features such as the balconies and the original render finish (AHC criterion F.1)